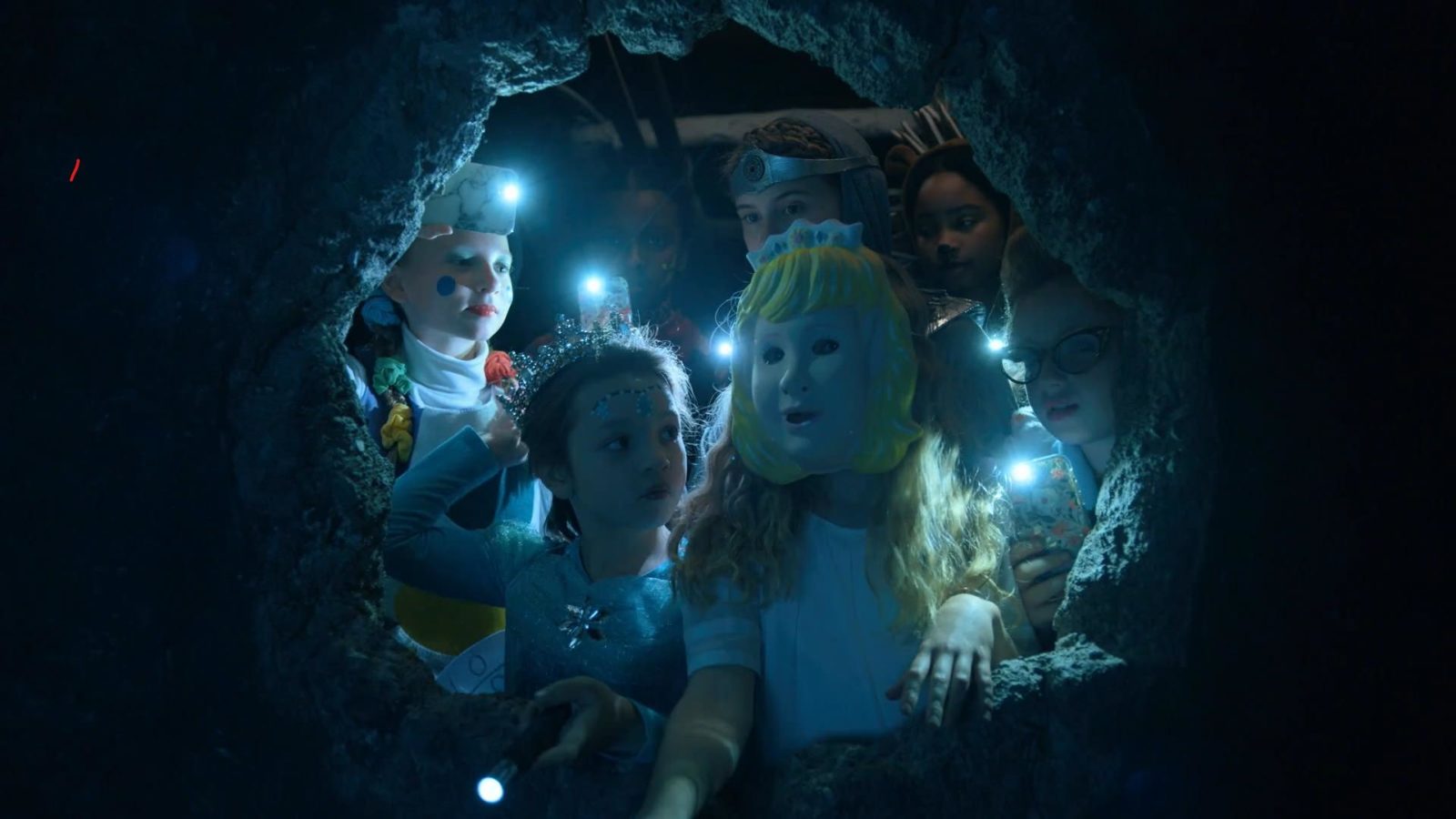 Warning: Spoilers for Seasons 1 and 2.

Here are a few moments from Seasons 1 and 2 that I found significantly creepy.

George is the name.

He’s not really scary as the series goes on, but when George first appears to Kristen, he’s terrifying. Sleep paralysis on its own is a horrible experience. Adding a demon just takes it to the next level. He’s almost snakelike, slithering around her dark bedroom. He pops up in Kristen’s dreams throughout the series, doing things like cutting off her fingers and threatening to cut out her daughter’s heart. Just normal demon stuff.

Do you wanna play?

Kristen’s four daughters — Lynn, Lila, Lexis, and Laura — play with some VR goggles for the first time. The game they play is creepy as hell, especially for children. A haunting little girl who says her name is Rose tells the girls to use a virtual Ouija board in the game and chant, “Hail, hail, hail.” Chanting is always a bad sign. The girls also encounter a butcher with a severed head in their bathroom and a ghoulish zombie peeling its own face off. This is easily one of the scariest sequences in the whole show.

Welcome to the world, little one.

While visiting David’s father, Kristen and David drink spiked sangria at a party full of artists. Kristen sees Esther, one of his dad’s wives (yes, one of), give birth to some kind of gross demon baby out in the cornfield. Esther bites into the sack encasing the creature and asks Kristen, “You want to hold her?” Hell, no. Whether it’s real or just another Kristen hallucination, the entire scene is horrifying.

A group of high school girls can’t stop singing and humming the same song over and over again. Kristen discovers the song they’re singing is called Pudsy’s Christmas, which plays in the background of an influencer’s makeup tutorial video. The girls end up stabbing their ear drums with pencils and scissors just to get the music to stop playing in their heads. Ben discovers a subliminal recording of a demonic voice telling kids and teens how to kill themselves. Truly disturbing.

The one with the squeaky shoes.

In one of the trippier episodes, David is confined to a hospital bed under the care of Nurse Plague. She keeps him drugged up and unable to talk or move. Another patient tells him that this nurse kills Black patients and collects their hospital bands as trophies. David has what seems like a nightmare sequence of monsters in hospital uniforms wheeling a Black patient to a “black mass” sacrifice. It feels like something straight out of a horror movie, giving off major Fire in the Sky vibes.

The team investigates a missing person’s case, which isn’t something they usually do. However, this particular person is a teenage boy who disappeared and may have been dabbling in the occult. Kristen’s precocious daughters help her figure out that it’s something called the “Elevator Game.” If you hit the right buttons in the right sequence, you’ll take a trip to hell. Kristen investigates alone and finds herself trapped between floors. It’s here that she sees a ghoul crawling toward her. She eventually gets out and chalks it up to a hallucination. Later, Ben tries to figure it out on his own. Being the genius that he is, he gets the sequence right and goes to floor 00. He enters this dark, empty space and finds two bodies (Wyatt, the missing boy, and his girlfriend Felicia who came to find him). Thankfully, Ben is rescued by David and Kristen before he ends up like the deceased teens.

Kristen’s really been going through it this season. After killing Orson LeRoux, there’s something off about her. She doesn’t necessarily feel guilty, though she’s uneasy about the whole situation. She also experiences urges to do more bad things. With crosses burning her skin, we can assume that she’s possessed in some way. While Leland gets his exorcism, it starts to have an effect on her, and she retreats to the bathroom. She realizes she’s bleeding from her stomach. A mysterious open wound pushes out her insides along with maggots, followed by a monstrous larva-like baby. Of course, it’s all in her head, but it’s disgusting nonetheless.

Something’s wrong with me.

Mitch, a vegetarian medical student, suffers from cravings for human flesh, and he has no idea why. He takes precautions to restrain himself (like zip-tying himself to his bed at night so he doesn’t try to eat his roommate). The team inspects the school, looking for some clue as to what’s going on with Mitch. Ben and David find a corpse marked with a demonic sigil. Later, Mitch goes to Leland for help. He’s greeted by Leland and a bunch of others we don’t know, offering him a dead body literally on a platter.

Both seasons of Evil are streaming on Paramount+.