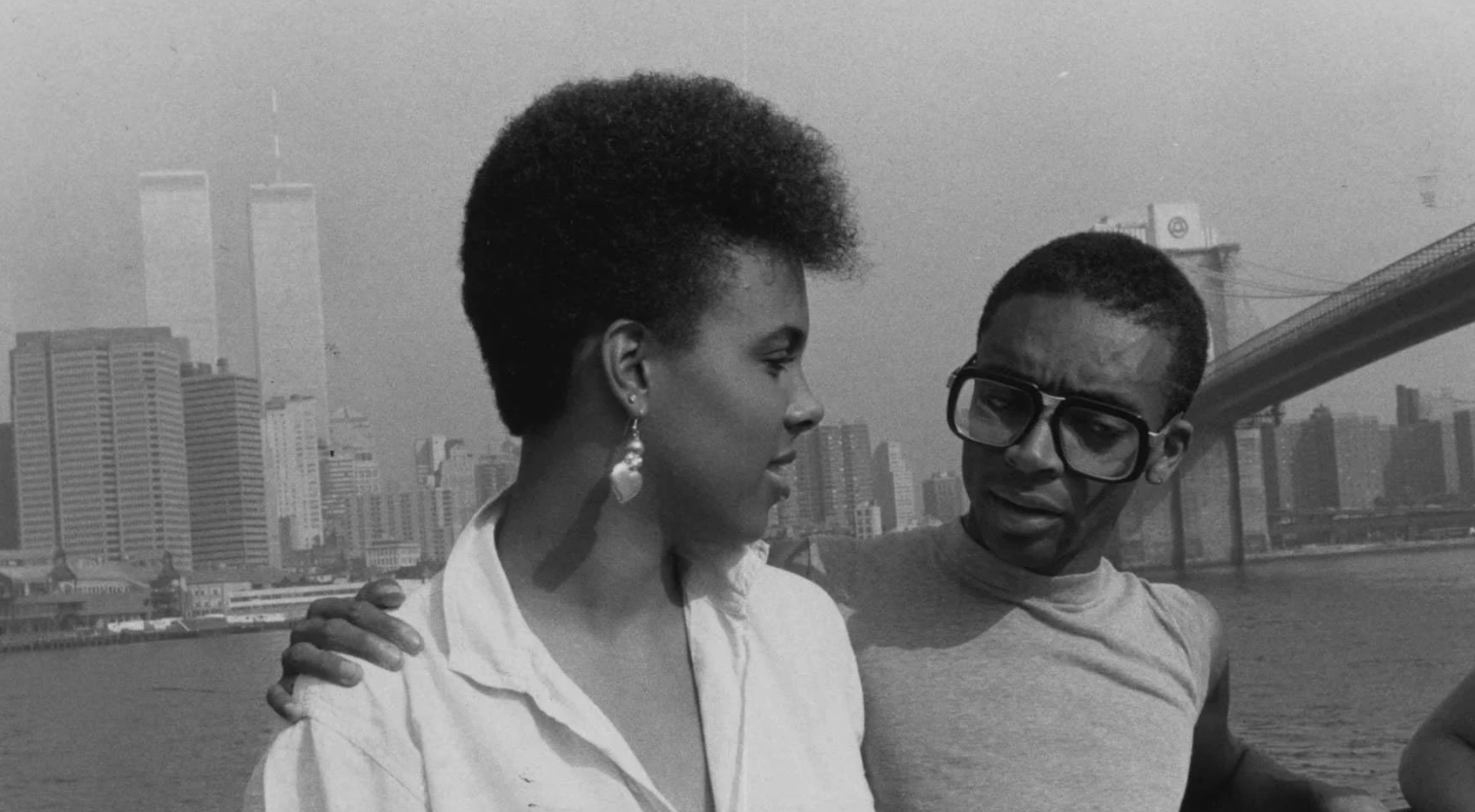 She’s Gotta Have It is a film that begins and ends with women. Even before we meet our protagonist Nola Darling (Tracy Camilla Johns), we are treated to a quote from Zora Neale Hurston’s Their Eyes Were Watching God:

“Ships at a distance have every man’s wish on board. For some, they come in with the tide. For others, they sail forever on the horizon, never out of sight, never landing until the Watcher turns his eyes away in resignation, his dreams mocked to death by Time. That is the life of men.

Actor, writer, editor, and director Spike Lee begins his first feature-length film letting audiences in on the fact that this film is about the stark difference between the “li[ves]” — especially where it concerns intimacy — of men and women.

It’s almost shocking how much insight and sensitivity this 1986 film has about the unapologetic sexual lives of young Black women.

Inspired by a viewing of Rashomon, Lee puts his Brooklyn twist on the Japanese classic and makes a film ostensibly about a woman’s former lovers testifying as to what her problem is.

Spoiler alert: she doesn’t have one.

Instead, what Nola has are three lovers — Jamie (Tommy Redmond Hicks), Mars (Spike Lee), and Greer (John Canada Terrell) — infatuated with hatin’. Each hates that Nola won’t be “his” alone, each hates that Nola isn’t joking when she says she’s in “like,” not love, and each certainly hates the other. While the film ultimately becomes about Nola accepting herself to be the healthy, active person she is, it spends its largest portion of its runtime dissecting how much men seek to control women’s bodies.

In the end, possessiveness presented as romantics is this film’s true villain.

Jamie, Greer, and Mars all feel that Nola is his own if only she would accept that fact. Jami, whom the film positions us to identify with most since he seems most level-headed, turns out to be vengeful and rageful. Mars seems like a good secondary candidate for Nola’s affection since, despite his obnoxiousness and chronic unemployment, he makes both Nola and us laugh. Yet he, too, can’t get over his suppositions about how women should behave sexually. Greer, finally, is such a pompous, conceited, know-it-all jerk that it’s a foregone conclusion that he’ll never win Nola’s heart. That said, his actor portrays him so perfectly obnoxious that we can’t help but quietly pray he gets more screen time.

The problem, as the film and Nola repeatedly tell us, is none of these men listen to her when she says she doesn’t want commitment.

Like all cishet male victims of patriarchal ideology, each of Nola’s lovers feels he alone knows what she really needs, despite all her womanly protests.

For example, Mars thinks it’s daddy issues, yet the film says no: she’s had a great childhood, and her father is a loving, “normal” guy — whatever that word even means. Greer thinks she’s a nympho, and while he doesn’t mind her exhibiting this mania with him, he thinks she should get professional help. The therapist she sees, however, says Nola’s perfectly healthy (though Mars chalks that up to the leniency of “woman therapists”). Jamie, finally, thinks Nola is simply lost. “You’re always searching,” he says. “For what, I’ll never know.” He’s correct in his earlier assertion that Nola has to have “it,” yet the film questions if “it” is simply sex or the freedom to act on one’s quirks and idiosyncrasies without societal censure.

It’s appropriate that this is Lee’s first feature out of film school because it very much has a student quality to it. This is not a detraction. Lee and cinematographer Ernest Dickerson pour love into every shot, seemingly softening Brooklyn’s hard angles and sharp corners. We get the feeling that the borough and its Fort Greene neighborhood are just as much a character as the humans residing within it. Where the acting is clunky, Hicks at times seemed to be doing a first read-through of his lines, it also feels endearing. This is an art film by a director who has not yet had the misfortune of having studio execs beg, cajole, or command him to make this or that story change to ensure profits. Lee made this film with his family, friends, and a shoestring $175,000 budget gained only after a rough cut NYU showing. The fact of its pet project status shines through in all the attention paid to its score, photography, and story.

It’s appropriate that this film is shot in black-and-white except for one fantastically choreographed dance scene because its characters tend to think in the binary. To many in the picture, male or female, women are either hos or housewives, with no room for ambiguity or an end to labeling altogether. Nola’s therapist confides to the camera that Nola is sane. What the doctor doesn’t say is that the men in Nola’s life will most likely drive her crazy with their standards and hypocrisy.

She’s Gotta Have It ends with Nola alone in bed, and I consider this a victory. No one needs Mars, Greer, or even a fake good guy, and real “near” rapist, Jamie. Nola is alone, but she is not lonely. She calls on her former roommate and friend Clorinda Bradford (Joie Lee) to help her get her mind right. Like Hurston’s protagonist Janie Crawford, Nola Darling confides in another woman to explain that she is unabashed about her sexuality and willing to face a community that resents her for it. If men’s lives are ones of longing, projection, and loss, then Nola embodies that apparently feminine trait of dreaming a life, one of freedom, and then living accordingly.

This, Hurston might say, is the life of women.

She’s Gotta Have It can be streamed on Netflix.