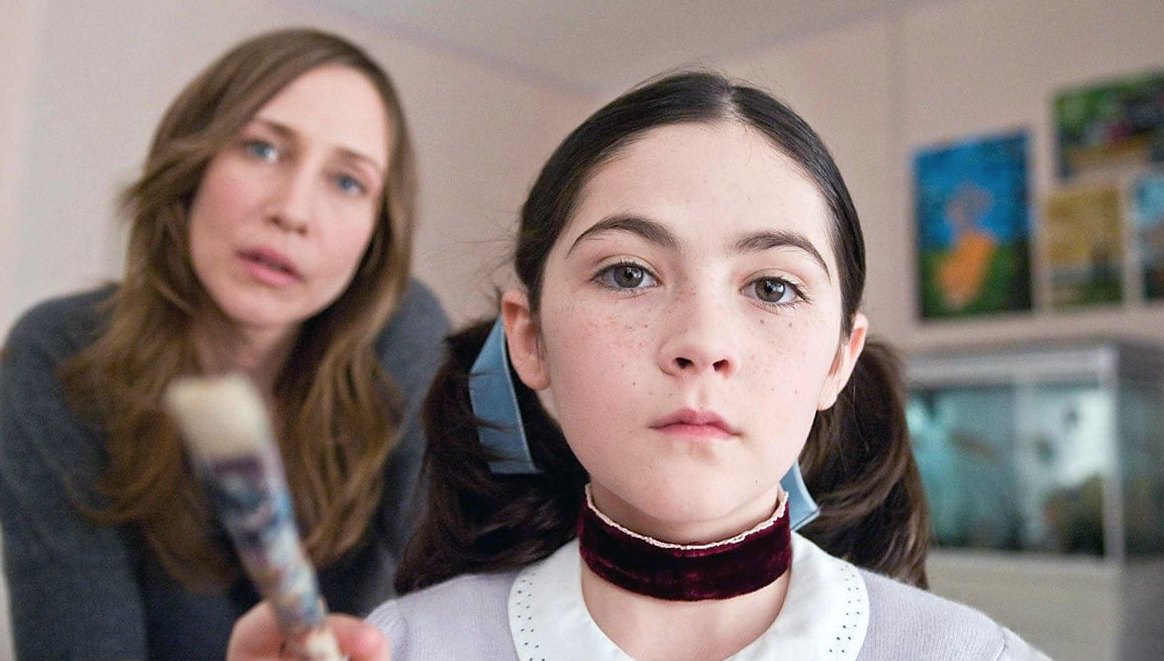 I have a strange trait. Well, several, but let’s stick to one. I have a weird urge to want to watch what would happen if characters in horror films didn’t have the “horror” part happen. For example, what would 2018’s Halloween remake be if it were just the story of Jamie Lee Curtis’ Laurie Strode coping with past trauma and trying to reconcile with her family after her obsessions with security above all else have pushed them away? What would Midsommar be if we just followed the deterioration of Dani and Christian’s toxic relationship?

Granted, this would mean we missed out on all the hacking, slashing, and carnage — the reasons most of us patronize horror films in the first place — but what we would gain is a better understanding of what drives them before their motivations boiled down to simple survival. I say all this because this is how I felt re-watching 2009’s Orphan.

Other than the absolutely terrifying bit of medical horror that makes up the film’s opening minutes, Orphan introduces us to its world via its genuinely interesting characters. Though it may just be the actors. Vera Farminga as Kate and Peter Sarsgaard as John is beyond believable as a married couple attempting to make their relationship work despite John’s past infidelity and the strain of Kate’s semi-recent miscarriage.

Besides them, child actors Jimmy Bennett and Aryana Engineer as Daniel and Max, respectively, shine as Kate and Peter’s natural-born children who have divergent reactions to their newly adopted sister “Esther,” played formidably by then-twelve-year-old Isabelle Fuhrman.

It makes complete sense that Fuhrman reprised her murderous role for this year’s Paramount+ prequel Orphan: First Kill. It would be a crime to have it any other way. As “Esther,” aka 33-year-old Leena Klammer, Fuhrman portrays one of the best villains in all B-moviedom. “Esther” is a conniving, sociopathic, and uncomfortably sexual woman being played by an actual child.

It lends to the film’s overall creepiness that this woman/child wants to seduce her adoptive father. It compels us to watch as she manipulates everything and everyone around her, particularly young, impressionable Max. We sit rapt as moves remorselessly from kill to kill, pausing only to gloat at her own terrible genius.

Director Jaume Collet-Serra, at this time known for directing music videos, television commercials, and the 2005 film House of Wax, proves he is more than capable of directing not just blood-and-guts horror but legitimate suspense. His camera angles range from the panoramic to the claustrophobic, although makes unfortunate use of a shaky-cam effect more than once.

This is the only time I feel like I’m watching the work of a former director of late-nineties and early-aughts music videos. Besides this, Collet-Serra directs his actors to make their characters persons rather than meat bags. Thanks to a combination of script, direction, and acting, we want to see these characters (well, maybe not John) survive for reasons other than the fact that it’d be a bummer to see the villain get away with killing a family of four that includes two children.

It is worth noting that when this film came out, it was met with reproach by adoption agencies that felt it fed into negative stereotypes about the so-called risks of adoption. I cannot speak to the validity of their concerns with any authority. I can only say that I trust that the moviegoing public, then and now, understands that the odds of bringing a killer child — who is actually a deadly woman — are practically zero.

They also likely know that, even when adoptions don’t work out the way one planned, they are still a worthwhile and admirable endeavor. Children, even children struggling with mental illness exacerbated by institutional living, are worthy of homes and love. And they likely won’t harm you or manipulate your adorable daughter into helping them bash CCH Pounder’s head in.

Paradoxically, what makes Orphan get B-movie fare is that it plays upon these absurd, unfounded fears. Think The Green Inferno. Think 1985’s exploitation thriller Tenement. The basis is rooted in largely suburban phobias about the unknown other. Once we see these frightful fantasies played out ad absurdum, however, they are expunged. The moment our worst, most xenophobic qualms are enacted onscreen, it becomes clear that they are simply fears. They are terrifying feelings that wholly disregard facts and probabilities.

I had a blast watching this film. In fact, it made me excited to watch the prequel, which has higher critical acclaim according to Rotten Tomatoes. Orphan is very exploitative of unfair fears. But I feel this works to its credit as a proud B-grade horror flick, what I like to call top-tier low-quality films. It would be a very different story if this were the thrust of the hypothetical dramas I described at the outset; that’d be appalling. As it stands, though, this is a silly movie about silly fears. It just so happens that it is also ingeniously crafted.