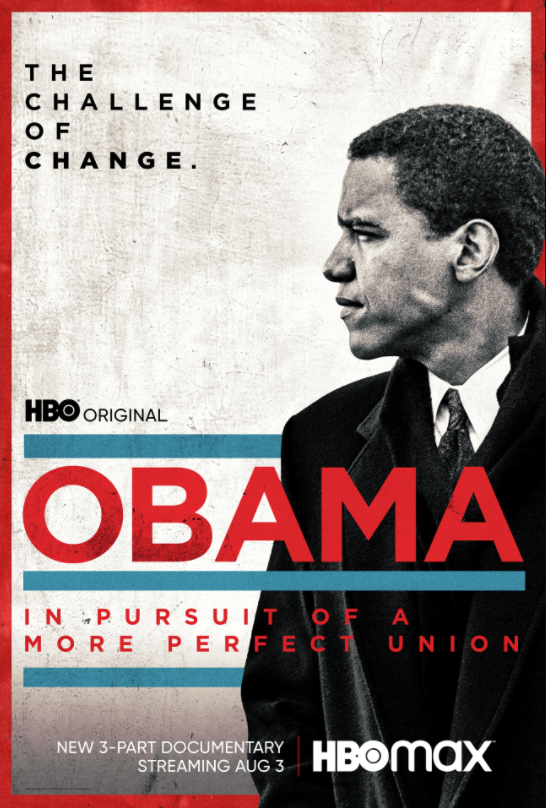 Seven years in the making, Obama: In Pursuit of a More Perfect Union is co-directed and executive produced by renowned journalist and author Jelani Cobb (The New Yorker) and is an impressive documentary about the life, politics, and presidency of Barack Obama. The documentary deftly blends past interviews with Obama at different stages of his early political career, with current interviews from some of Obama’s advisors and an impressive assembling of politicians, journalists, and thought leaders who give remarkable insight on the 44th President of the United States.

Part 1 begins with footage of an Obama speech in Philadelphia on March 18, 2008. Obama is on the campaign trail, and the purpose of the speech is a response to the backlash of criticism over his pastor and unpaid advisor, Rev. Jeremiah Wright. This speech is a reflection of Obama’s aspirational vision of a better America as an equitable multiracial democracy. We travel back in time to Obama’s childhood in Hawaii through family photos and get to know a little bit more about his liberal mother Stanley Ann Dunham, a young woman from Kansas who fell in love and married a young scholar from Kenya named Barack Hussein Obama Sr. During this period of time, it’s much easier for “a skinny Black kid with a funny name” to answer to Barry rather than Barack, and the documentary skillfully reflects the intersectionality of identities young Barry Obama learns to navigate during his childhood growing up in Hawaii and Indonesia.

Learning about his experiences living in Indonesia, going to majority-white schools in Hawaii, making his way to Columbia University, becoming the first Black president of the Harvard Law Review, then moving to Chicago to become a community organizer gives us deeper insight into the genesis of the “hope and change” movement that motivated the nation to believe that yes, we could be a more perfect multiracial democracy in 2008. The pacing of the documentary flows, and we end up with Senator Obama in 2005 as the Bush Administration attempts to deal with the aftermath of Hurricane Katrina, which opens a pathway for Obama’s presidential run.

Part 2 is really the meat and potatoes of the documentary. It was lovely to be able to relive the 2008 Obama presidential “hope and change” campaign. The filmmakers skillfully show how society projected its racial identity issues onto Obama, seeing him either as the ultimate savior or villain, depending on the political party. It was fascinating to witness the “old Black political guard” say Obama wasn’t “Black enough” while white people questioned his “Americanness” and his Blackness because his father was from Kenya and was of African descent, and his mother was a white American woman from Kansas. In a 60 Minutes interview, reporter Steve Kroft asks, “How important is ‘race’ in defining yourself?” Obama muses, “I am rooted in the African American community but I’m not defined by it. I am comfortable in my racial identity, but it’s not all I am.” The film shares the impact of race on the 2008 primary between Obama and Hillary Clinton. Both Bill and Hillary Clinton’s racially charged comments during this campaign do not age well. Obama: In Pursuit of a More Perfect Union takes the time to give an in-depth recounting of the Rev. Jeremiah Wright scandal in heartbreaking detail with commentary from Cornel West, Al Sharpton, and Valerie Jarrett.

Part 3 begins with Marty Nesbitt, a friend of the Obamas, remembering his and his wife’s first visit to the residential quarters at the White House. Nesbitt asks the elevator attendant, who happened to be an older Black man who had worked at the White House for 40 years, “How did it feel [working here] during this whole process, where an African American man was on his way to becoming elected president of the United States?” He replied, “At no time during the entire campaign did I ever think he was going to win. That was how improbable it was to a man my age.” Once Obama was elected, many claimed America had entered its “post-racial” age. But Al Sharpton wisely notes that whenever the United States experiences some steps toward racial equity, there is racist backlash. We revisit the instances of disrespect hurled at the first Black president by conservative members of Congress, by the Republican nominee for vice president Sarah Palin, and the Tea Party movement. Episode 3 dives deep into the blunders of the 2009 “beer summit” between Henry Louis Gates and Cambridge, Massachusetts, police Sgt. James Crowley, and the impact of the brutal murder of Trayvon Martin on President Obama. Unapologetic criticism is voiced by thought leaders like Michael Eric Dyson and Ta-Nehisi Coates that reflect the fertile ground where the Black Lives Matter movement was born.

Obama: In Pursuit of a More Perfect Union is a must-see three-part documentary that gives us context for the current political state of the United States.