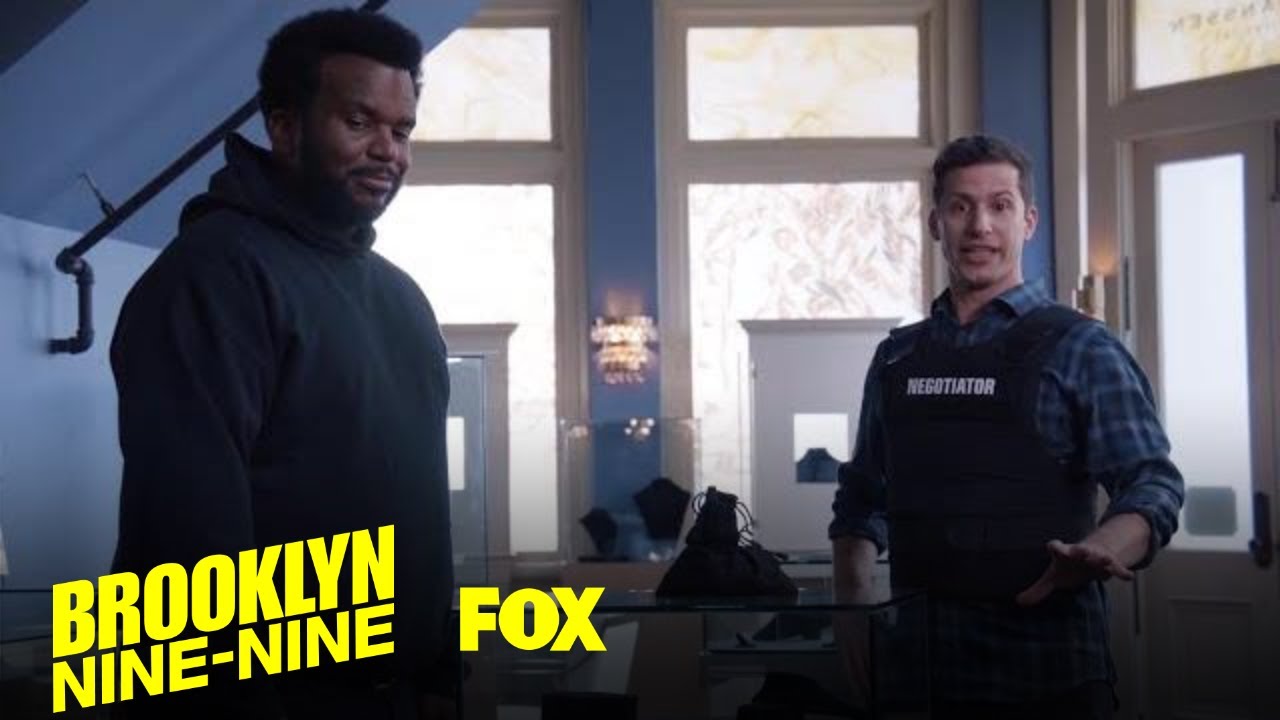 Doug Judy is back! I am both excited and annoyed by this week’s, Brooklyn Nine-Nine episode. Let’s get into it so I can tell you why.

Jake gets called in to be a negotiator in a hostage situation, and he is over the moon about it. He and Rosa head down to the crime site where there is already a professional negotiator, Denis, present (portrayed by Chris Bauer). Denis is pissed, because much like Jake, he’s been waiting his entire career to deal with a hostage situation and Jake just hijacked it.

When Jake gets inside, he finds out the perpetrator is Doug Judy. He confesses that his “hostages” are fake and that he paid them off to be there so he could get Jake’s help. Jake is too busy being disappointed because he thought Doug Judy had gone straight.

Because your past always comes back to haunt you, Doug Judy finds himself in the hands of a drug lord named Halloway who NYPD has been after for years. He has threatened to kill Doug Judy’s mother if he doesn’t steal some diamonds from a jewelry store.

Jake tries to explain all of this to Denis but he isn’t having it. Jake goes back inside. He and Doug Judy come up with a plan to make Jake a hostage as well so Rosa can help them by also “negotiating”. Together, they devise a plan that includes Scully, food, and lettuce in your pockets, which allows the “hostages” to be released and for Doug Judy to escape.

Doug Judy and Jake meet with Halloway.  Just as Jake is about to confront him, Denis finds them and tries to stop Doug Judy. Halloway tries to make a run for it but Jake stops him. Unfortunately, Doug Judy has escaped with the diamonds because you can’t teach a scorpion new tricks.

Later, Jake gets mail from a karaoke bar that Doug Judy frequents. Where he gets there, he finds a Le Creuset pot and the diamonds.

So let me just start off by stating that I am rooting for Craig Robinson. As the token black guy in the Judd Apatow-esque comedic universe, I’m genuinely concerned with how he’s doing. That being said, the Doug Judy story needs to end. I love Jake and Doug Judy’s friendship. It has a purity to it that comes with most of Jake’s relationships, but him tricking Jake and getting away with crimes for five straight seasons is repetitive.

Jake is a great detective, this is shown and told to us A LOT. So for me to believe that he doesn’t have the discernment to realize Doug Judy is going to trick him is ridiculous. I feel like it might be time to shelf this joke? Or at the very least turn it on it’s head.

Chris Bauer (Denis) was my favorite part of the episode. His curmudgeonly attitude was a fun contrast to the somewhat happy go lucky mood of the episode.

I don’t have that much to say about the subplots. The Captain Holt, Hitchcock and Terry storyline was funny but felt like a throw-away. I didn’t like Charles being a jerk to Amy and Gina even though it WAS on brand with the fact that every head chef I’ve ever met is a dick.

Pretty sure Amy made Jake watch “The Scorpion Tale”.

“That’s all negotiating is. Two liars lying to each other until one stands too close to the window and gets shot in the head”

“Are you negotiating right now?”