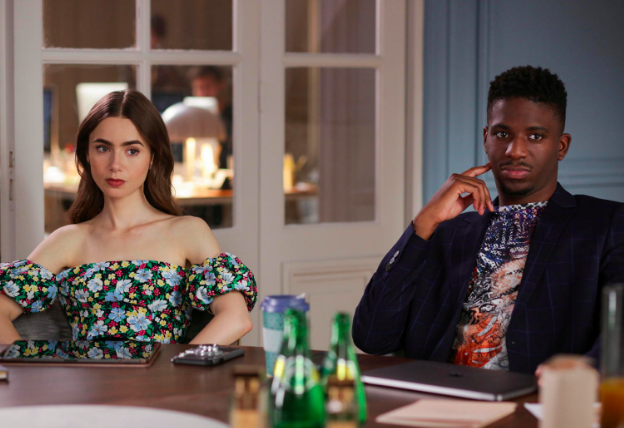 This girl runs more in a half-hour than I do in a year. Emily gets a phone call from Madeleine, who is giving wonderful mentor vibes. Yet, Emily isn’t honest about how she isn’t well received in the office but does inform Madeleine on her newly single status. New corporate commandments are coming through, and Emily will need to inform the Paris office. How fun! It also happens that Emily was standing by a urinal during the whole conversation. Yikes.

On her way back to the apartment, she takes a picture of French women outside a gym and smoking. Come on now. While Emily is showering, the water turns off. The landlady or manager isn’t happy with Emily in a robe and not speaking French. Gabriel translates for her in a nice way. Emily is taking French classes. Good for her.

Sylvie isn’t happy to see Emily happy. There’s no passive aggressiveness here, just straight dislike. Luc and the rest of the office aren’t impressed with the corporate commandments. Probably wasn’t the best way to inform them, either.

Back at the apartment, the shower can’t be fixed and only Gabriel can translate, which he does through coffee and croissants. According to the plumber, the part isn’t available and could take some time. Gabriel offers his shower instead.

Work is difficult considering that Sylvie thinks Emily is a nuisance and someone drew a penis on the corporate commandment document left on Emily’s desk. The girl flips then goes to lunch with Mindy. Mindy points out how commandments don’t do well in French culture. Emily isn’t used to not being liked, but Mindy comes through with an idea: dinner party at her employer’s apartment and invite Sylvie. How nice.

The commercial doesn’t make sense, but Emily comes up with an idea to put it on Twitter with a poll asking: sexy or sexist. Antoine likes the idea. Taking up Mindy’s suggestion, Emily invites Sylvie for dinner but that doesn’t pan out. Sylvie doesn’t want to get to know Emily. Emily asks why, so Sylvie points out why they won’t be friends. Regardless of that, Emily invites her to the party. What was supposed to be a small party is now a packed apartment where no one shows interest in Emily.

While out on a balcony, beautiful Fabien sparks a conversation and a bit of flirting. They take a walk and teach each other their respective languages. All of it is going very well when Fabian says he likes her eyes, lips, and neck but once he gets down to the kittycat, that is a turn off. The man is bold. She goes home alone but stops at Gabriel’s restaurant. She gets wine and complains about not being liked, but Gabriel informs her that he likes her.

Stateside, the poll is going great according to Madeline. However, the market doesn’t take to the commercial well. Madeline wants Emily to be liked and bring brand awareness. Emily drops a penis shaped cake on Luc’s desk, which is well taken. But on her desk, she finds a gift from Antoine. Lace lingerie. Hella sexy but from the wrong guy.