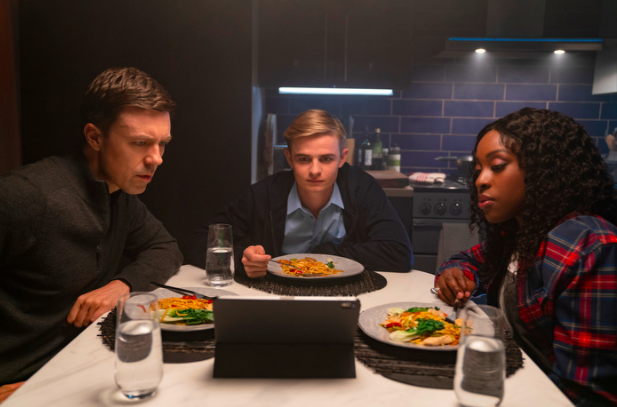 Alex Rider thinks he is a normal teenage boy leading a normal teenage life: he lives with his strict uncle Ian, who works for an investment bank, and his sparky American housekeeper (and surrogate older sister) Jack Starbright. But all that changes when his uncle is killed.

Refusing to believe the story he’s been told of a car accident, Alex enlists the help of his best friend Tom to dig deeper into the truth of his uncle’s death. Tracing Ian’s car to the site of the ‘crash’, the two boys instead discover a crime scene crawling with forensics officers and plainclothes agents. Alex soon comes to realize that Ian worked not for a bank but for a shadowy offshoot of the British Secret Service, known only as The
Department. Ian’s death has come at the hands of Martin Wilby, his partner at The Department, and a lethal assassin, Yassen, who in turn seems to be linked to the deaths of two billionaires and a mysterious school hidden in the French Alps: a place called Point Blanc.

Alex’s persistence and determination bring him to the attention of the head of The Department, Alan Blunt, and his deputies, Mrs. Jones and Crawley. They believe that the answers to Ian’s death lie within Point Blanc; and since Point Blanc is a school for troubled teenagers, Blunt argues that Alex is the ideal operative to put in undercover.

He also points out that Alex has, unknowingly, been trained his whole life by Ian to be the perfect spy. Mrs. Jones is reluctant to put a teenager in harm’s way, but Blunt insists. They approach Alex and offer him the mission, but Alex, blaming them for his uncle’s death and for a lifetime of lies and deception, refuses. It is only when Jack is confronted by an immigration officer who claims her visa is a fake and then threatens to deport her and turn Alex over to Child Protective Services that Alex realizes who’s calling the shots; he calls Alan Blunt to say that he’s finally ready to cooperate…

In the premiere episode, following his uncle’s mysterious death, Alex Rider begins a quest for answers that leads him into a dark world of secrets and espionage. He comes to realize that his uncle wasn’t the man he thought he was – and that Alex himself is expected to follow in his footsteps.

‘Moment of Truth’ Season 1: Justice, Peace, and Equality for All