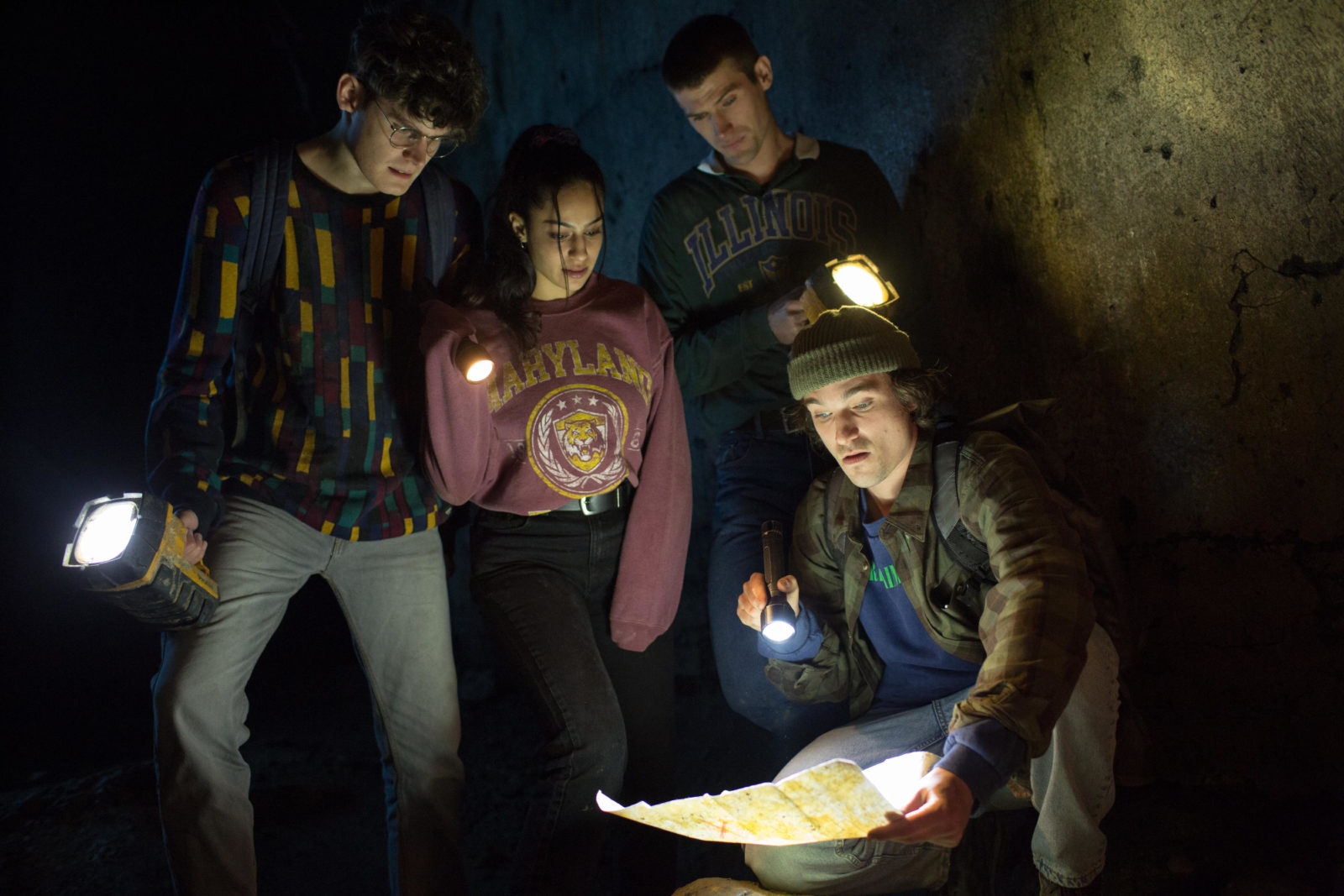 In early ‘90s Paris, three college friends, Sonia (Sofia Lesaffre), Max (Kassim Meesters), and Henry (Victor Meutelet, aka Timothée on Emily in Paris), go out for a night of drinking to celebrate before Henry heads off to the military. It’s actually a pretty laid back get-together in a pub, but Sonia wants to do something more fun and adventurous to give her pal a proper sendoff.

Sonia’s drug dealer, Ramy (Joseph Olivennes), offers to guide them through the legendary Parisian catacombs, which is just as concerning as it sounds. The wise but immediately dismissed Max is reasonably hesitant to go underground, with a guy he just met, no less. The tunnels are body-sized at best, the major light source comes from flashlights, and Ramy is too enthralled with the surroundings to really care about how uncomfortable this trek is for everyone. They meet up with his fellow “cataphiles,” Faust (Blaise Afonso), Dante (Olivier Bony), and Lamia (Léone François-Janssens), who also throw caution to the wind in the name of exploring underground.

In classic horror fashion, the group continues to go deeper into the catacombs despite several warning signs advising otherwise. When they venture into an unexplored area, all bets are off. When things get bloody, the reality of the situation sinks in for everyone, even the excitable “this is the chance of a lifetime” Ramy.

The film takes its time to get going when it comes to the big jump scares, but Sonia’s fear of a gang of neo-Nazi skinheads roaming around is much scarier than anything they’d find in the catacombs. Max and Henry are afraid of the skinheads, too, but there’s a different level of terror as the only Brown girl in a group of white men. It’s an inherent fear POC still have today, so I can only imagine what it was like in early ’90s France. I’m not sure about performer Sofia Lesaffre’s own heritage, but the character Sonia is coded as mixed-race French-Algerian. Given the history between the two countries, it makes her uneasiness all the more rational.

Grégory Beghin described the film as “more a B series horror type movie” and said that he finds it “interesting to have Deep Fear seen as a horror movie, actually, because it’s a cliche about those movies.” The three friends loosely fit into the cliche horror archetypes — Henry, the handsome party boy; Max, the nerdy hypochondriac; and Sonia, the cool girl who can hang with the guys and gives off major final girl energy.

The depth of their friendship isn’t really explored, and we don’t really get any backstory. Are they childhood friends? Did they meet in college? We don’t know. They’re likable (which isn’t a requirement, but hey, it helps) and feel authentic; they’re not fully developed but still interesting enough for an audience to care about whether they live or die.

I appreciate the familiar genre setup of partying twenty-somethings being reckless and finding themselves in a scary situation, while also making it stand out a bit. I’m not really sure about the significance of setting the story in 1991, other than some cool clothes and the impossibility of a smartphone. Various synopses state Deep Fear is in the 1980s, but there’s really only one scene in 1989 and the rest is all 1991.

Besides a few VHS camcorder shots, Deep Fear is classic cinematic storytelling, unlike the found footage style of As Above, So Below, another film about the horrors lurking underneath Paris.

And considering the limitations of a dank environment and a 17-day shoot, the quality of the film is impressive, especially the cinematography by Yvan Coene (Coyotes). Lighting is scarce but the little that’s used, which is mostly just flashlights, is effectively creepy. The entire setting is claustrophobic, but the moments when the characters actually crawl through the narrow tunnels are the type of scenes that make you unknowingly hold your breath.

Deep Fear is an atmospheric subterranean survival thriller with a B movie vibe sure to make you claustrophobic. Between walking the dark streets of Paris at night and the presence of skinheads, the film establishes a sense of foreboding above ground rather quickly, making use of its 80 minutes of runtime. It also explores historical xenophobia, which might be the scariest of all. Deep Fear might not break the mold, but it’s tense and surprising with plenty of scares both seen and unseen.

Deep Fear has its U.S. premiere at Fantastic Fest 2022 before coming to Screambox on October 11.