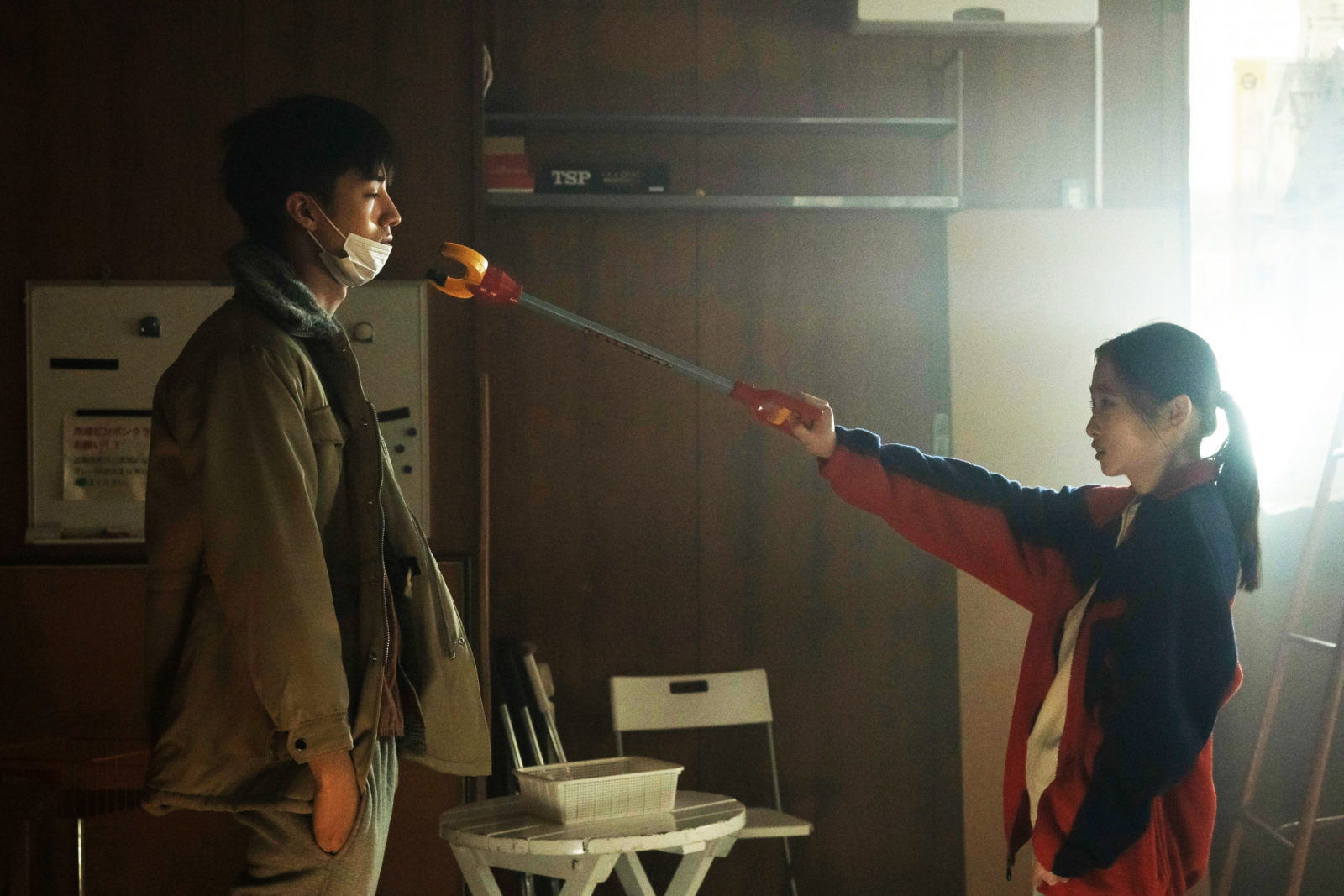 Japanese writer-director Shinzô Katayama (Siblings of the Cape) makes his commercial film debut with a genre-blending tale that explores multiple themes and relationship dynamics. Co-written by Ryô Takada (Over the Fence) and Kazuhisa Kodera (The Naked Director), Missing, recently acquired by Dark Star Pictures, is a film with twist after twist that goes deeper than one would expect. Having previously worked with Academy Award-winning filmmaker Bong Joon-Ho (Parasite, Okja) as an assistant director on TOKYO! and Mother, Katayama proves he’s learned from the best and developed his own voice.

Missing begins with a teenage Kaeda (Aoi Ito), still in her school uniform, running through the streets of Osaka to get to her father Santoshi (Jirô Satô), a widower with a failing ping-pong club and a lot of debt. After attempting to shoplift from a store, Santoshi finds himself in trouble with the police, and it’s up to her to diffuse the situation and pay for the items. We can tell that this isn’t the first time she’s had to bail her dad out of a sticky situation. From here, we know their dynamic — a desperate father down on his luck in need of his daughter to be the adult in the relationship.

Santoshi tells her that he’s spotted the infamous serial killer “No Name” (Hiroya Shimizu). Finding the killer comes with a high monetary award, giving Santoshi a reason to be excited. Kaeda dismisses her father but when he goes missing the next day, she has to lead her own search to find him, fearing he could be the killer’s next victim. She enlists the help of a classmate who eagerly tries to be her boyfriend (Ishii Shotaro).

We don’t just see things from Kaeda’s point of view. The perspective transitions between the three lead characters, slowly peeling back the truth of the story or rather showing that there’s maybe not one single truth. When the perspectives intersect, we see the whole horrifying picture from all angles.

Shifting POVs also shift genres. With Kaeda, it’s an emotional mystery that tests the strength of a father-daughter relationship. With Santoshi, it’s more of a psychological thriller that explores depression, guilt, and the meaning of life and death. And from the unnamed killer’s perspective, it veers into horror territory.

The three lead actors play their roles well and imbue their characters with nuance and complexity. Hiroya Shimizu is chilling as the elusive murderer both when he’s completely unknown to us and when we learn more about him and his twisted motives. The film doesn’t get too gory but it doesn’t need to; Shimizu scenes are disturbing sans blood and guts.

Aoi Ito convincingly plays all the confusing and conflicting emotions of being a teen, particularly one who has been forced to grow up sooner than she should have. She’s pretty much become her father’s handler since he’s been so depressed and financially struggling. Jirô Satô’s Santoshi is a sympathetic character even though his choices aren’t the most morally sound.

Missing isn’t your typical crime thriller or cat-and-mouse mystery. It blends all three, offering something tense and intelligent, and there’s just enough suspense to keep you fully engaged. It does move slowly in an art house kind of way, lingering on uncomfortable silences and significant pauses between dialogue. But it maintains the uneasiness it’s already established.

The film feels like a “quiet” thriller with mostly serene-like settings. There are moments when it gets more intense, and composer Hiyoko Takai (Siblings of the Cape) uses some unexpected jazz beats to heighten the thrill. The cinematography by Naoya Ikeda (Legend of the T-Dog) is especially captivating, with long tracking shots that reminded me of The Shining.

As for the inspiration behind the film, Katayama said, “Missing is an original story which comes from the real-life experience of my father, who lives in Osaka, actually seeing a person wanted by the police.” This is why the story feels authentic with realistic characters. Despite their extreme circumstances, sadly, we’ve seen similar father-daughter dynamics like Santoshi and Kaeda before. However, with these two, their interactions can easily shift from frustration to silliness in a matter of seconds.

It’s difficult to fully delve into the film’s themes without spoilers, but Missing has a tonal similarity to Parasite and explores similar ideas as Snowpiercer, which makes sense since the director has worked with Bong Joon-Ho before. However, the dark comedy in Missing is less overt and more laughing at some of the choices the characters make. All three angles have a hint of humor, particularly with Kaeda and her interactions with the boy trying to date her, as well as a big chase scene between her and the fleeing killer.

Missing is a helluva debut for Shinzô Katayama. The film is a character-driven psychological thriller that gets you thinking and keeps you guessing. It’s a bit of a slow burn, but it pays off with the ending.

After having its world premiere at Busan International Film Festival, Missing (Sagasu /さがす) makes its US debut at Fantastic Fest 2022.