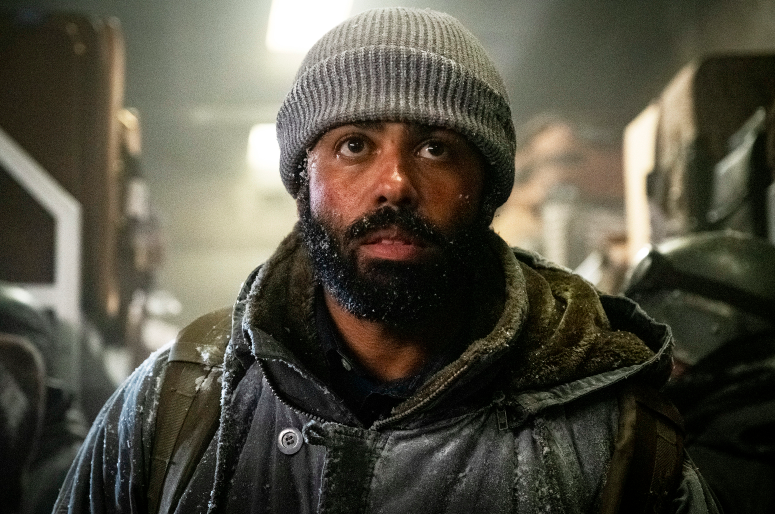 If a post-apocalyptical Hunger Games-ish snow train show with Daveed Diggs starring as the main character (Layton Well) doesn’t sound good, I don’t know what does.

The show, which premiered May 15, 2020, introduced Layton (Daveed Diggs) and the other passengers on the massive 1,001-car train called the Snowpiercer seven years after the world has frozen over. Not all passengers are treated the same, as those wealthy enough to get tickets before the dystopian ice age get a luxury ride while those too poor for a ticket don’t exactly have the coziest time. Get ready to get chills because the social inequality aboard this train is pretty darn icy cold.

Although there are some predictable moments and familiar tropes, this is one show you won’t want to miss. In fact, it’s one of those shows that if you walk away from it for even a moment, you’ll miss something important. So, keep your eyes peeled — you’re going to want to pay attention and catch as much as possible. Joon-ho is very good at building mystery and suspicion from both the plot and the characters in the show.

If you’ve seen Murder on the Orient Express, you’ll recognize a trend in mysteries as they unravel, and you’ll find yourself wondering if you can trust these characters — and if they can trust one another.

This show is particularly interesting and unique when it comes to the levels of the train. Much like the American economic system, those on the top live the best while those on the bottom live the worst. The people living on the bottom desire to ascend to higher levels and achieve social mobility. Some people want to do this by following the train’s rules, while others don’t.

The theme of rebellion and social outcry for equality and equity are common themes in this show, as many characters are treated unethically. This echoes the marginalization, racism, climate change, capitalism, classism, and social distance that Joon-Ho does a great job depicting in his work.

Some of the more haunting topics Snowpiercer addresses are the sterilization of the poor and suicide. It isn’t just concern with starvation and access to resources; the entire reproductive agency of the train is being population controlled. Additionally, train authorities are not overly concerned with the poorer passengers either dying of natural causes or committing suicide.

The so-called “visionary” Mr. Wilford is the omniscient God-like conductor of the train. He is elusive and mysterious as his motives and level of power are unclear. His classist system caused the poor to violently force themselves onto the train, and many were killed in the process. (And I thought riding Amtrak was stressful.) Children were separated from families, and families were torn apart, much in the tradition of many dystopian shows.

Wilford Industries seems to represent many cruel money-first corporations that aren’t concerned with helping people so much as with hoarding resources for the highest bidder. Mr. Wilford is like the Game Keeper from Hunger Games who may be a puppet for an even bigger powerhouse operating behind the scenes.

The most fascinating part of this show is the alliances that are formed. As the audience, we are very limited in our access to private conversations. All that we can attempt is trying to read someone’s poker face, and even then, these characters are tricky. With so many train level interminglings and double agents, you may need to rewind a bit to keep up.

The show references many biblical allusions, as the passengers are like children and Mr. Wilfrod is like God. They live by his will and his wishes. Even the upper-class passengers complain about feeling controlled by Mr. Wilford. The train’s workers were only granted tickets to higher class train levels because they agreed to work for the rest of their lives on the train. They don’t have much more agency over their lives than some of the lower-class passengers.

In this ice-shattering thriller, you won’t know what to expect next and there will even be moments that make you cringe. However, there is a certain curiosity for what happens next at each episode’s cliffhanger.

Ultimately, Snowpiercer is a good show. It’s not fantastic, it’s not bad — but it’s worth watching. By having a Black main character, it offers a more authentic representation of race and class division both on the train and beyond. Layton Well is bold and knows how to strategize. He’s an interesting lead character that easily brings audiences to his side as the noble leader. He’s very “Jon Snow” in the way that he’s a natural leader whether he wants to be or not.

There is a sort of corruption in most of the characters that Well doesn’t have. He’s good a haggling and working people, but ultimately seems to have good intentions.

The acting is heart-numbingly good from all of the actors. There was never a moment that I was taken out of the show with either unnatural dialogue or bad characterization.

The only thing I recommend is bringing a blanket with you when you watch it, because that Snowpiercer classism is cold.