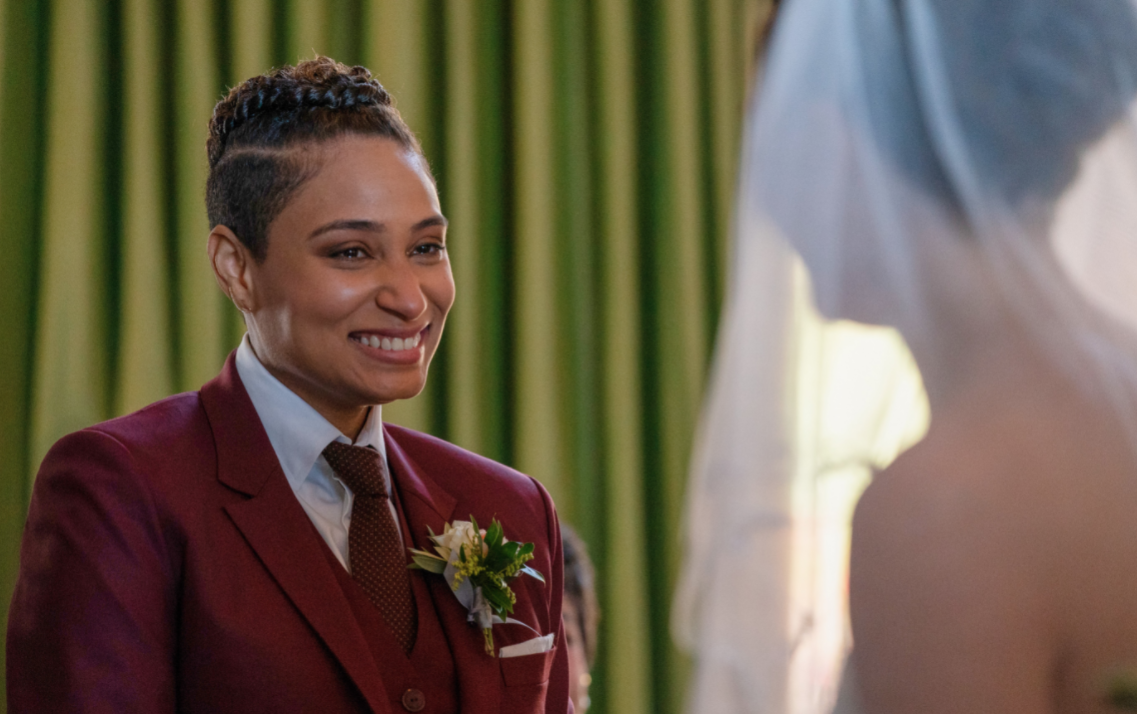 In a recent phone interview, the Brooklyn and Queens native gives a fresh and humble perspective on all of the above.

You mentioned that you watched the earlier The L Word before getting this part. What was your favorite thing about the show then?

I really loved the pilot episode. I think it was one that does reveal character. And Tina — I’m pretty sure it was a pilot or just in the first season — they were talking about adopting a child and how Tina didn’t feel equipped to adopt a Black child.

Jennifer Beals’ character was like, “Well, don’t you think I could be well-equipped in that area because he is Black?” That was actually one of the first times I’ve actually seen a television show talk about a situation like that. It was really eye-opening.

You don’t get to hear characters talk about this a lot on television; you know, what it means to be a person of color — if you feel Black enough or enough of anything in the world. It was really interesting, and I really loved the way that she spoke about it.

How does that differ from what The L Word: Generation Q is showing?

I think there’s definitely more inclusion this season. In the first iteration of it, they tried but did get some things wrong. It wasn’t perfect all the time. People were still trying to learn how to talk about certain aspects of the LGBTQ+ community.

This time around there’s more education and more information. The casting is very much taken into account when it comes to playing these characters. People take their time with them so they can be as accurate and authentic as possible. That’s one way they differ.

Also in this series is Generation Q. It’s really nice to have a different generation of younger people going through things that the previous generation might have been going through but in their own way.

In your opinion, describe what is best and worst about your character so far.

The best part about Sophie is how much she loves people and how deeply she feels for people. Also, the moments of fun that she gets to have at work. I think those are some of my favorite parts. The worst part, I say, is that she probably feels a little too much. Sometimes I just want to say, “Hey, Sophie forget about all that and just go to work!” Decisions, Sophie! But then that wouldn’t be good TV, would it?

Growing up, who were your favorite female actors?

I have a bunch of favorite actors. Viola Davis is definitely on there as one of my top favorites. She went to Juilliard, and so did I. So it’s really cool to see other female actors of color who went to that same school. Watching them embody characters on television and just be so good at it really inspires me. Toni Collette is another one of my favorites and all the actors on The L Word!

If you recall, what were your thoughts then about the lack of Afro-Latina representation?

I think about growing up and really wishing that I could have seen something like that on television. I always say, “Why was that my favorite TV show?” It’s a great show and it’s full of comedy, but I could never see myself on television like that. Then I noticed that was all that was on my television.

It’s the thing about relearning. Why did I like this show more than another show? Why is it that the show that I like doesn’t have as much representation as the show that I don’t like? What has been written in my mind for so long that makes me only want to watch certain kinds of television?

Hopefully, the people who watch this show have more of an open mind when it comes to creating work. I wished that there had been an Afro Latina on Friends. Yeah, even one would have been so great. But it didn’t happen. I feel very lucky to be able to be part of a generation that’s very much thinking about that.

What part of your own personality are you bringing to Sophie?

I try to bring as much truth as possible to this character in terms of her relationships and how she feels about other people and to make sure that every moment that I have with whoever I’m in the scene with that it’s grounded in some kind of reality.

You have talked about hair texture. I’m curious if it was traumatic for you to cut so much of your hair, I am assuming, for this role?

Pretty traumatic. This is something that actually I really love talking about because before I cut my hair, I had been trying to go back to my natural hair and my natural texture.

There’s a lack of freedom in the Latino or the Black community when it comes to hair, [feeling that] you need to look a certain way in order to work or progress in your life. So it was important to have natural hair and work with natural hair products on the show. I want to be able to work in a healthy way without having to compromise my natural texture

What kind of fan reactions have you had since joining the show?

It’s so funny because I’m not used to being recognized. The other day, I was sitting eating some Mexican food and this girl who looks like I would know her starts waving at me. And of course, I just waved back. I was like, “Hey!” And then, you know, people around were looking at me and they see me saying hi to my friend, but I really don’t know this person!

She whispered, “I really love this show,” and I’m like, “Uh, I thought we knew each other.” So I’m not good at [being recognized].

We got a chance to surprise some fans at a watch party for the premiere. It was just beautiful for them to see themselves on screen. When Gigi, the Persian character, came on, the entire crowd just went wild. There’s a large Persian community in California, and it was really beautiful to see a community that is little represented just scream at the top of their lungs because they felt so connected and seen by someone worldwide through a television.

The L Word: Generation Q is currently available on Showtime.