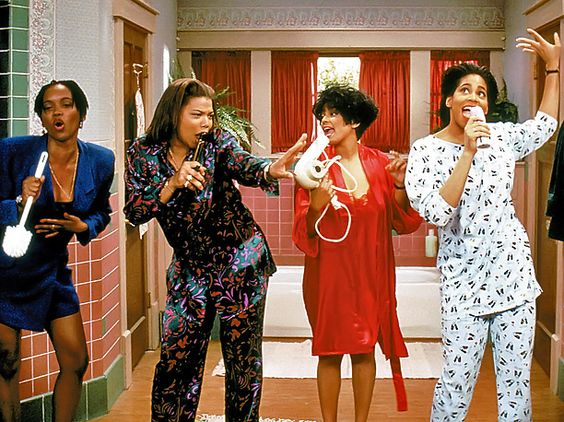 It was a simpler time. I vividly remember seeing the cast of Living Single poised and self assured letting people know about their upcoming, groundbreaking sitcom seated on the Arsenio Hall Show. At the time, his was the most electrifying late night property on television. I also shamefully remember being put off by Erika Alexander’s feaux locs and shaved sides because up until that point I’d never really seen a natural woman on television.

Still, I was transfixed by my favorite rapper teaming up with a standup comedienne that I loved and a former child star and sitcom veteran that I adored. It was certainly A Moment in Black culture even if I didn’t fully get that at the time.

Living Single debuted in 1993, the same year as my favorite show of all time, Star Trek: Deep Space Nine. I had not discovered its genius yet, but I watched Single from the pilot all the way until the end in 1998. It was a revelation to see these professional sistas live their full lives in a Brooklyn brownstone with their male homies from upstairs. Everyone was genuinely funny, the stories were well crafted and it soon became my favorite show. And it still holds a Top 10 slot in my all time favorites. Seeing successful, Black, women of varying size and complexion having the time of their lives, was a joy every week.

Now, the venerable Dana Owens –crowned Queen Latifah, is making noise about reviving the old show. I. Am. Here. For. This. I would love to know what the gang is up to. Apparently the core cast still keep in touch, and we know that Queen Latifah has done nothing but win since she showed up on the scene, “a woman standing up on her own two, sloppy slouching is something [she] won’t do.”

That winning streak parlayed into decades of choice acting and producing roles. I know I’d love to see the middle aged versions of the young up and comers I watched 20+ years ago. What’s happened to Flavor? Are they a global website and brand now? How many babies do Overton and Sinclaire have? Did Regine shuck her bougie ways and get deep into activism? How many ex husbands did Max acquire after Kyle?

Check out what Ms. Dana Owens / Queen Latifah / Mama Zulu has to say about it in the video below! (Check out her classy shade to NBC and Warren Littlefield. I like that other guest too! Spilling the tea like that! He be knowin.)