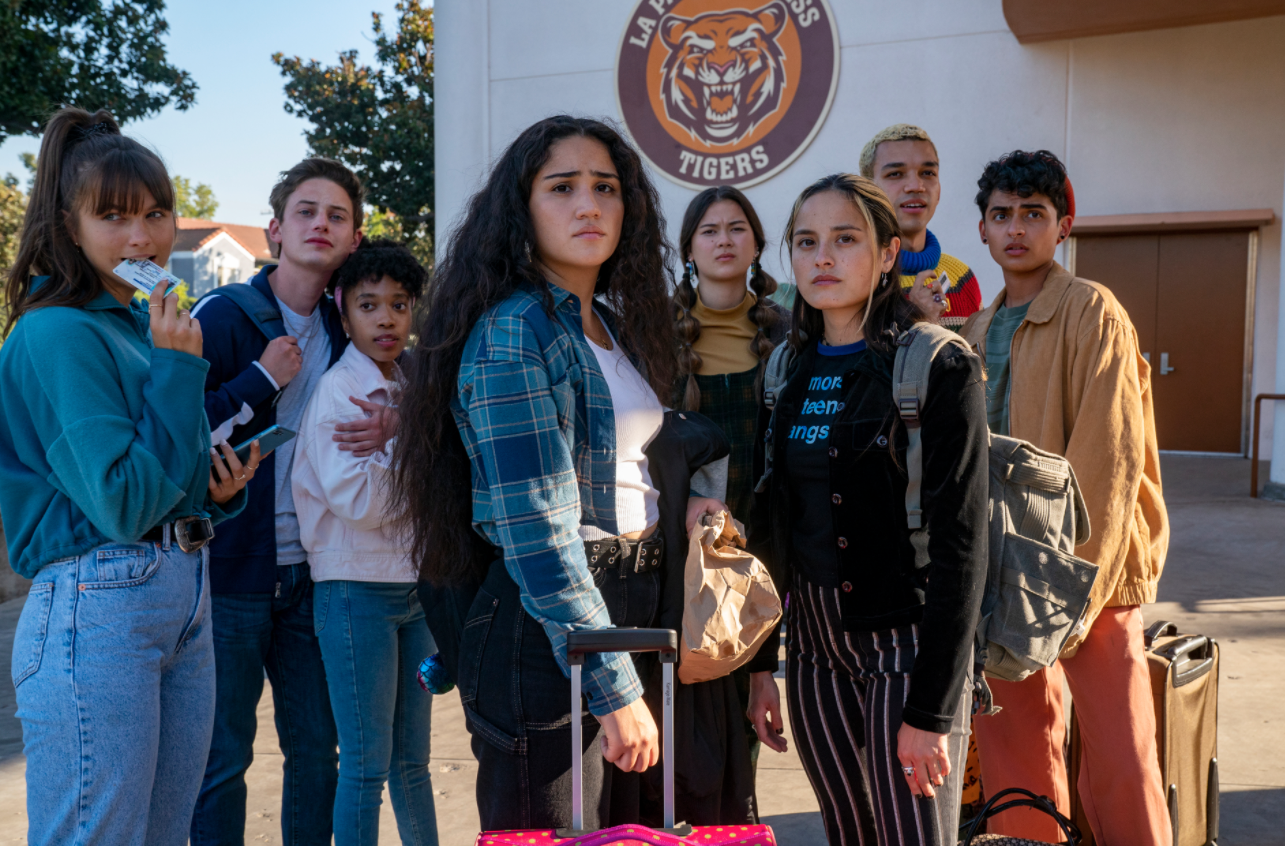 HBO and HBO Max seem to be the place to go for compelling, real, teenage drama series. The first that comes to mind are shows like Euphoria and We Are Who We Are. Coming this spring to HBO Max is a new teen drama series created by 19-year-old Zelda Barnz and her father, Daniel Barnz, Genera+ion. It’s amazing to think a father-daughter writing team is the one giving us a deep dive into high school with conversations on sexuality and race, to name a few.

Genera+ion follows a diverse group of high school students whose exploration of modern sexuality tests deep-rooted beliefs about life, love, and the nature of family in their conservative community. As expressed by Mr. Barnz, it’s a show about “queer kids of color in Anaheim.” For those not familiar with Southern California, Anaheim is part of Orange County (The O.C.) and definitely not the first place I think of when talking about people of color and the LGBTQIA community.

Inspiration for the show…

Daniel Barnz: I think we were inspired by a lot of different shows. I grew up a long time ago, and maybe my inspirations were coming from some John Hughes movies. But this came from Zelda. This was her idea. It came from stories that she started to tell us about her Gender and Sexuality Alliance that were kind of poignant and funny. We suggested that she write them down. Then we said, “Oh, you know, it would kind of make an interesting TV show just because the characters and the stories and the roles are so amazing.”

We found our visionary partners at HBO Max, who saw that there could be a show like this, with characters like this, that a lot of people could see themselves in and relate to, even if they were completely different ages, races, and ethnicities, and identified different ways across the gender and sexuality spectrums.  What we really hoped with the show was that people who are of Zelda’s generation would see themselves in it and be like, “Oh, yeah, that’s kind of what it feels like.”

Balance of race AND sexuality AND representation…

Zelda Barnz: We drew a lot of inspiration from authenticity and real-world influence when we were writing and creating the show. I think if you’re basing a show off something real and authentic, something that’s real and authentic is intersectionality and people who identify across the gender and sexuality spectrum, and with different races and different ethnicities. So, I think it’s important to remember that they’re not just people who are straight and gay, there’s like a whole spectrum. All those identities deserve to be represented.

Daniel Barnz: Zelda wanted to make sure that the characters were identified in the script by race and ethnicity because I think she felt, and sometimes this is true, that when people read scripts, they tend to read characters with unspecified race and ethnicities, as “white.” It was so important to her to make sure that all of these characters would ultimately be cast predominantly by people of color, and that those stories that we’re telling would be about the ways that they identify across the gender and sexuality spectrums, and about their race, and about them as people.

Justice Smith: I feel like when you have content about adults or people who are older it’s like, yeah, they curse and they have sex and they do drugs and they do this and they do that, and no one’s saying like, “Oh, that’s exactly like all these other movies.”  But, for some reason, when you focus on young people and you show them authentically, everyone’s like, “Oh, these are all exactly the same.”  No, these are all very different stories, but it’s just we’re in a new zeitgeist now where we’re accurately depicting what adolescent life is like. I’m also grateful for HBO Max to be this platform to say, here are these three different shows, very different shows, that all accurately depict what adolescent life is like. I think shows about teenagers have been made into a genre, and we are kind of ripping that genre open.

Chloe East: When I read the script I was like, “Wait a minute. I know this girl. I know this language.” If anyone has ever gone to high school or met a high schooler, you know this is our language. The show captivates you, and it just encompasses everything that it is to be a high schooler.  It’s so authentic.  It’s so truthful. This is not sugar-coating anything.  This is just the truth.

Nathanya Alexander: I agree. When I first read the script I instantly freaked out, because I knew each and every character, and I love that each character is so bold and perfectly balanced, and each character has a freedom of expression and they’re unfiltered. That’s exciting to play, especially when you know these character in real life.

Daniel Barnz: Zelda is the co-creator and EP, and she’s such a strong north star for all of us, because she’s just out of high school and she can tell us where we’re getting it right, where we’re getting it wrong.  I can’t tell you the fierce notes we’ve gotten about how our texts are written in the show, and what it means if you put a capital letter or a period at the end of a text, how it’s a sign of aggression and we better not do that. So thank God for Zelda for keeping us on track.

Zelda Barnz: I definitely think at first it was a bit uncomfortable trying to figure out what I could and could not talk about with my dad, but I definitely got to a place where I was like, I want this show to feel real and I want the show to feel authentic. In order to commit to that vision, I’m really going to have to be honest and open. Topics like sexuality and sexual identity have never really been taboo or shameful in my family, so it wasn’t particularly difficult to get to that place. But definitely, there were moments where it was weird to be talking to my dad about certain things within this language of this show.

Daniel Barnz: There was a lot of blushing going on in the writing of this show.

Genera+ion will be available on HBO Max starting Thursday, March 11, 2021.