After three years in the Air Force, I moved from southern Germany to the Hampton Roads area in Virginia. Langley Air Force Base to be exact. Upon in-processing, we learned about NASA and Katherine Johnson, Mary Jackson, and Dorothy Vaughn.  This was the first time I ever heard about the trio. These women are science geniuses and instrumental in the American space race to launch of astronaut John Glenn into Earth orbit and landing an American on the moon. This is exciting news to hear because it’s great to know women played such a significant role in American history. 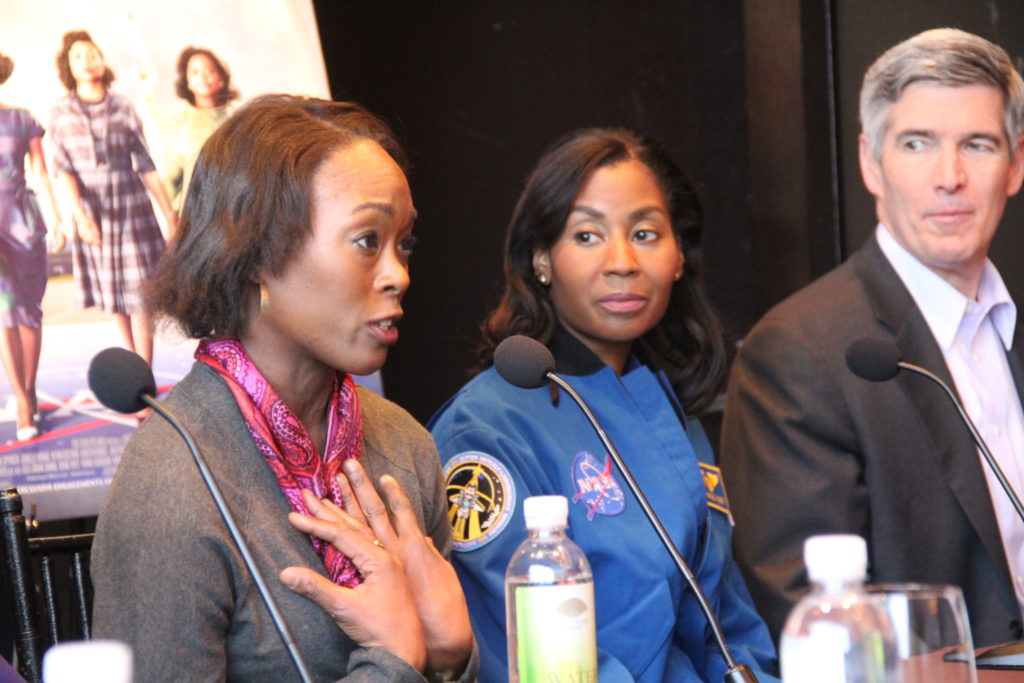 I finally saw pictures of what they looked like and I exclaimed “OH S**T!” These are black women I exclaimed. I nearly fell out of my chair. This news added a whole new element of exciting for me. To know that women who looked like me were so influential, gave me a sense of pride and purpose. T Sure they are local heroes, but they deserve so much more than that. This is why the film Hidden Figures is so important for everyone to see. Not only are there stellar performances by its lead actresses Taraji P. Henson, Octavia Spencer, and Jonelle Monae, but it’s a lesson in American science history.

Due to the film’s limited release in theaters, the press has been covering the movie heavily. In New York City on a gloomy afternoon, some of the cast and crew of Hidden Figures were on hand to answer questions and talk about their experience. Director Theodore Melfi explains how the project came to be.

“It all started with a 55-page book proposal introduced by Hidden Figures book author Margot Lee Shetterly, who grew up around these three amazing women. Octavia Spencer was the first actress to sign on based on the first draft of the script. She couldn’t decide which role she wanted to play; she just wanted to be involved. Also, I’ve wanted to work with Taraji since I saw The Curious Case of Benjamin Button. To see the way her career evolved, I didn’t want to miss out on an opportunity to work with her.”

“Thank you for noticing!” says Taraji. 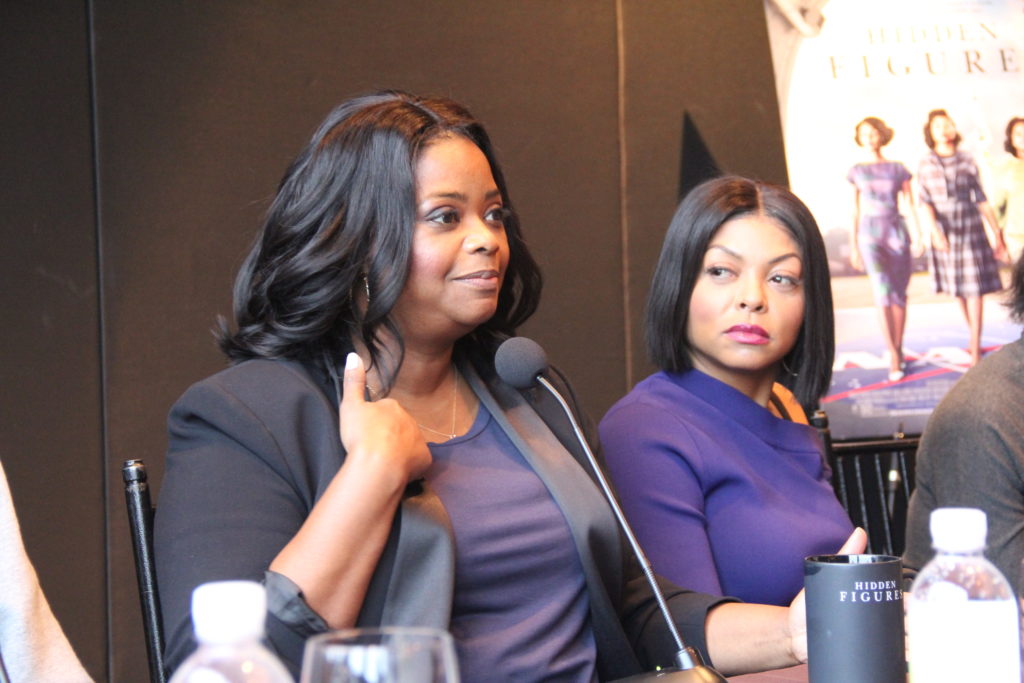 Playing characters who lived in the era of Jim Crow, overt racism, and segregation was something that hit home for Taraji. She’s aware that many of the themes present in the movie still resonate today.

“When you’re portraying a person that is very real and still alive, there is a responsibility to get it right. At 96 years old, Katherine Johnson still lives, and I felt it was my duty to meet with her.  When we finally met, it was like being in the presence of a real life superhero. One of the things that stuck with me was her humility. She is a selfless individual and her passion for math rubbed off on me. I am so happy to know these women’s lives matter to the great space race,” Henson explains.

I can’t imagine what that experience was like to stand in the shadow of greatness. Taraji is grateful to have met with Katherine Johnson and her family, but for Octavia Spencer. she had to take a different route to get the information she needed about Dorothy Vaughn.

“For me, it was a different process because Dorothy Vaughn’s legacy remains. I googled to find out as much information as possible about Dorothy and very little was available. If you search for her now, you will see more details including Margo’s book, NASA archives, and things referring to back to the movie. Ted gave us archival footage from NASA and read and see the camaraderie these women had as friends are powerful.”

With a film this diverse, it’s easy to guess the diversity question comes up very often. Many are sick of hearing that question. Not because the question is difficult, or people don’t want to deal with race in Hollywood, but for what the question implies. Henson expounds on this further:

“As a Black woman in Hollywood, I get asked the diversity question a lot. Octavia brings up a good point as she doesn’t like the word ‘diversity’ because many people assume it means black vs. white. Diversity involves the disabled, all women in front and behind the camera, and members of the LGBTQ community. It doesn’t just start with us,  and we are just scratching the surface. The experience with Katherine has helped to change my perspective on my work and my environment.”

This project would not be possible without the insight of author Margot Lee Shetterly. She grew up around these women and is passionate about preserving their memory. Shetterly understands the real life women of Hidden Figures did not have it easy but believe in the mission enough to what they could to help the country achieve its goals. 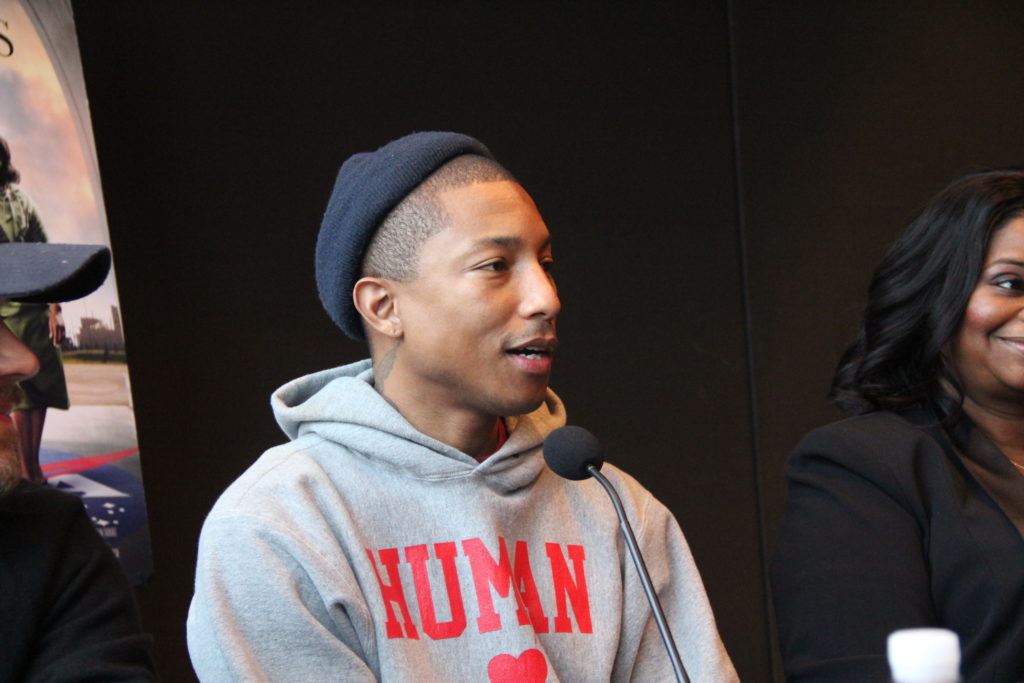 “These women saw this as an everyday fight. One of the things I wanted to show in the book and film I wanted to show how banal and ridiculous racism is. It may not have been as violent for them as beatings or the water hose, but the aggression was still there. Being able to show how they navigated the system creates a human bridge to the story. They expanded the imaginations of people around them and expanded their minds to who scientist was and could be. These women brought the very best by bringing our country, African-Americans and women an excellent service.”

I was fortunate enough to learn about this dynamic trio, but most have not been privy to who they are until now. These women are national treasures and their impact on American history should be taught in all schools around the world. Hopefully, with the release of the movie Hidden Figures, you won’t have to go far if you want to learn more.