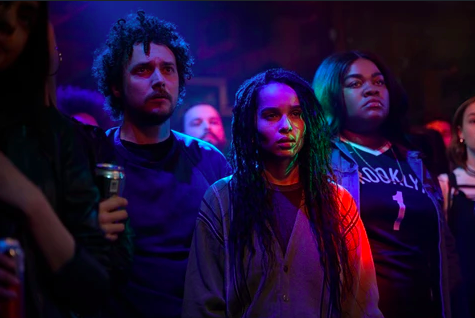 On Valentines Day, the new High Fidelity television reboot stunned audiences for its creative reimaging of a gender-swapped Rob (Zoe Kravitz) and a diverse cast of characters.

Critics and viewers couldn’t deny that there was just something too cool and glamorous about Zoe’s portrayal of Rob that didn’t have the same pitiful grunginess of the 1995 Rob. The television adaptation lends a new sort of swagger that the earlier depiction couldn’t quite capture. Zoe Kravitz’s performance immediately had many of us nerding out and loving her alternative Black girl vibes. While Rob is literally beyond obsessed with great music, previously worked as a DJ and is rocking some cute braids, she is not performing in a stereotypical manner. Her Blackness is a part of her but isn’t overaccentuated to draw readers to only view her as a static Black woman. Rob is, in the purest form, just Rob. She has a tortured love life and has made relationship mistakes just as most of us have.

Her performance is both relatable and intriguing as we receive glimpses into her past love lives and the hefty baggage she’s been lugging around. She can go from making you adore her to making you want to scream at her for being so mean to Clyde! (Like, seriously, no spoilers, but he is such a sweetie and I just can’t with how she treats him).

This adaptation seems to have it all, but there is one big problem I’ve noticed. While petite light-skinned Rob gets to be an unconventional alt-Black girl badass, her thicker darker-skinned best friend Cherise (Da’Vine Joy Randolph) is perpetuated as the same stereotypical Black girl archetype that we’re all just sick and tired of seeing. Cherise is loud, rude, distrustful and falls far behind, Rob’s other best friend’s, Simon (David H. Holmes), plot development. Unlike other characters, she gets no romantic interest or history to be explored. Cherise is presented as a confrontational, asexual, big Black girl.

Uh oh, I thought we were making so much progress. Cherise is depicted as being “all talk, and no action” when it comes to her flaunted musical talent for most of the season, making our girl look like a poser. But wait, it gets worse, Cherise is also poor and far less successful than Rob. I know the fact that it’s an adaptation may explain Cherise working for Rob. However, if they decided to flip the script, quite literally, and include two Black women, they could have gone another step forward. Rob deciding to give Cherise pity handouts while being an awful friend (as well as kind of an awful ex-girlfriend) doesn’t seem to dull Kravitz’s bravado to the viewership.  Rob’s non-traditional portrayal as a Black woman seems to be more palatable because Kravitz is biracial, attractive, light-skinned and thin. It seems that Cherise was written to remind viewers that Black women that look, quite frankly, more Black are still not allowed to access complexity and fluidity within their representations.

There has been a long-standing controversy regarding the colorism in casting and writing in the television industry. Kravitz’s biracial identity seems to give her the green light to operate outside the boundaries of typical Blackness. Da’Vine’s character, however, leaves us halted right where we’ve always been, and to be honest, I’m sick of it. I’m proud of them for including two Black women as central characters in a show, but this is setting a bad precedent, and it’s not okay. The perpetuated binarism of “the more docile light-skinned Black girl,” and “the angry dark-skinned Black girl” have got to end. With the first season already finished up, we can only look to the next season and hope that Cherise has more opportunities to become a more developed character.  No spoilers, I promise, but the end of season one may be a hopeful segway into seeing Cherise bloom during season two. Fingers crossed!

Should We Say Goodbye to the Term “Women of Color”?