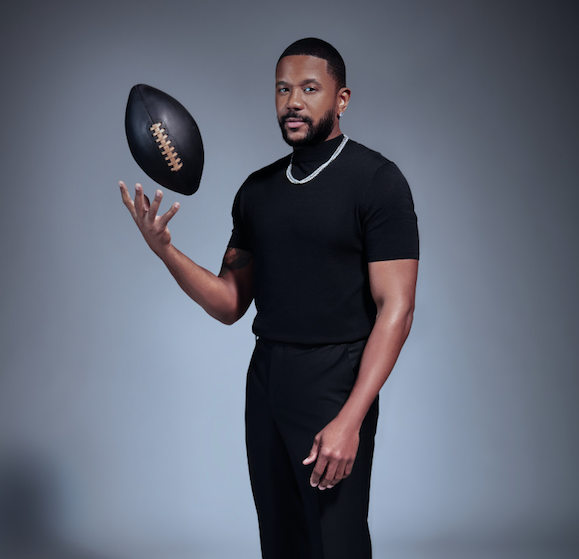 How do you explain the iconic status of a Malik Wright? Hairstyle innovator, catch-phrase coiner, scene-stealer, cocky-and-he-knows-it footballer with a heart of pure platinum. For 9 seasons on BET’s The Game, Hosea Chanchez won over hearts and minds alike by turning Malik Wright from a cocky jock to a fleshed-out human being — all without losing a bit of style.

On Thursday, November 11, 2021, the new reboot of The Game premiered on Paramount+, and Malik still takes center stage — except this time, he’s all grown up. When we see Malik, he’s still living the high life. Now he’s excited to become part owner of the newest pro-football franchise, the Las Vegas Fighting Fury. He’s ready to retire and go on to the next chapter of his life, but soon learns no matter how fast and long he runs, he can’t outrun his unresolved demons.

I was able to Zoom with Hosea Chanchez about Malik, why he decided to get back into The Game, and what’s next for him.

When I asked Chanchez how he was at the beginning of our talk he said simply, “I don’t really know how I am. I mean, I know I’m great, but like, what’s happening?” It’s an understandable feeling. The season finale of The Game aired in 2015 after running for 9 seasons. That means it’s been 15 years since the show began and 6 years since it ended.

While reboots are all the rage, it’s one thing to hear about them, and another to be told your show was next.

The Game in and of itself is that rookie player. The original premise of The Game centered in part around new rookie for the San Diego Sabers, Derwin Davis. Derwin starts as a green newbie and over the years goes on to being a franchise player. The Game in its original incarnation started on The CW before moving to BET+. Now the new reboot and rest of the series have found a home on Paramount+. So just like Derwin, The Game started as a rookie, became a franchise, got traded, and now it’s up for Hall of Fame status. With shows like these, there’s something that becomes proprietary when you have an audience for that long. They start to say, “This is my show!” and you watch it grow up.

“We’ve grown up together!” Chanchez exclaims, “There’s a beauty to the generational aspect of it. How often as an actor do you get to play a character that multiple generations can watch? That just doesn’t happen. So yea, we grew up together and went through so many different phases in our lives.” Chanchez was only 25 when the show started and is now 40. His personal journey adds a maturity to Malik that grounds his character and makes him relatable, despite his often over-the-top antics.

In both parts of the premiere episodes, we see Malik again trying to retire and get out of the game. Malik seems to be stuck in a strange cycle; he sees football as both the cause and the cure for his problems. On one hand, it’s where he finds the most success and most fulfillment, but on the other it’s what leads him directly to his vices. We’ve seen him have issues with substance abuse and alcohol addiction. Malik understands that his future lies in football, but after a series of injuries and stress on his body, he’s tired of full contact sports. He can never seem to stay away for long.

“For a lot of athletes, actors, and artists in general,” Chanchez says, “that’s one of the synergies that we have as connective tissue for us. We’re all concerned about what’s next. The balance in life is to be able to enjoy the moment you’re in and not always trying to find what’s next. But Malik is in that phase of his manhood where he’s trying to discover what’s next. In many ways, so is Hosea. There was a real possibility I wouldn’t have come back to this series, because I was still discovering what my future looked like as an actor.” Chanchez didn’t want to be stifled creatively and couldn’t see the point in picking up the character right where he left off. But after seeing Malik’s growth, Chanchez knew he’d made the right decision.

Malik Wright has certainly had an evolution, even in just the first two episodes. It’s debatable if the reboot would have worked if he were the same person, acting the same way, and making the same bad decisions.

“It would have needed to be a different actor,” Chanchez interjects matter-of-factly. “Because it wouldn’t have been Hosea. It was my goal to really narrow in on Malik’s purpose this season, and his agenda in his arc is self-discovery. Now that he’s discovered what he wants, he has to figure out how to get the things done he sees before him.”

For the reboot, both Wendy Raquel Robinson and Chanchez will be instrumental in producing the series and Chanchez will even direct. He’s very excited by this new and challenging opportunity. “This journey allows me to be more involved in the structure, not just of the story, but of characters which was really important for me to do,” he says. “I felt Malik needed this type of growth. When I left the show, I actually thought my character was incomplete. So I was excited to get a chance to give him a better ending, and I think we’re on track with it.”

Malik had his demons in the show. Chanchez personally is a great advocate for mental health, especially that of Black men. “It’s become one of my main focuses,” he says. “Black men, in particular, can be the most vulnerable from changes happening in our society.” Chanchez is careful not to frame his thoughts as oppression Olympics; he stresses that every group has their needs for movements, but one centered around the Black male experience seems to be missing.

Chanchez notes that Black men still need understanding and direction. There’s a type of generational curse when we talk about the effects on the Black community and especially Black men due to slavery and segregation. It manifests internally, and it’s why we always have the highest cases of high blood pressure and cardiovascular disease. “Part of my mission is to bring exposure to this need through my job as an artist. Not saying I have all the answers, but I do know this is a crisis. There’s not enough access to healing and we have to support and empower one another.”

In The Game, Malik is very open about his mental health journey and gets check ups regularly. Chanchez was thrilled to get the opportunity to portray him this way. “I like the idea of trying to break the cycle and asking what can we do instead to heal as a community and as a people.” Chanchez adds, “[It’s] in addition to doing the work for our women and our LGBTQ+ communities because it’s important to do the work all around. But it starts with us.”

For someone like Malik to be an alpha male and a professional athlete and be very concerned with the state of his mental health, it sends a very powerful message.

The Game reboot airs on Paramount+ where the series can be seen in its entirety.

New Trailer and Episodic Images for ‘The Game’ on Paramount+