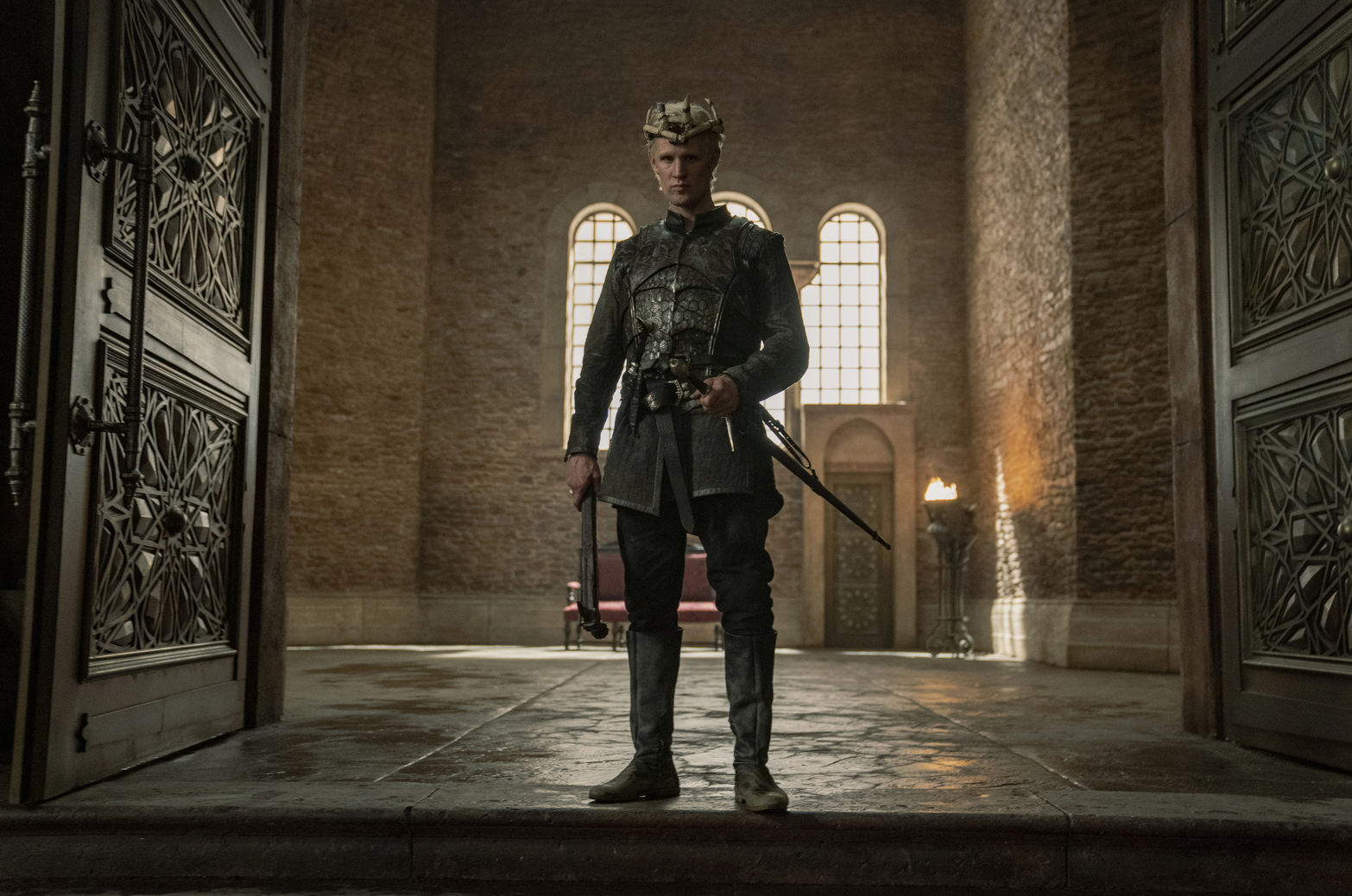 Now that the Crabfeeder has been defeated, Prince Daemon Targaryen (Matt Smith) is named King of the Stepstones and the Narrow Sea.

In the opening shot, Princess Rhaenyra Targaryen (Milly Alcock) caresses the necklace made of Valerian steel gifted to her by Daemon. Years have passed since they spoke. Still with a bit of a chip on her shoulder, Rhaenyra is currently selecting the next Hand of the Princess.

The first Lord is too old and the second nominee and is too young. The young boy is teased and draws his sword to the man who called him “craven.” As it turns out, those were that man’s last words. Ser Criston Cole (Fabien Frankel) shields the princess from the violence and tells her not to look.

As both Criston and Rhaenyra are aboard a ship, out of nowhere, Caraxes sideswipes their boat, nearly knocking them over. Although the Princess hit her head, she is all right. She delivers a smile, knowing that Daemon has finally returned.

Everyone gathers into the throne room, and King Viserys (Paddy Considine) with his crown above his head waits eagerly to see Daemon. Daemon walks in, and his appearance has completely changed. His long platinum locks of blonde are hair cut short as he wears a crown made of driftwood on his head.

Daemon kneels before Viserys and says that he knows there is only one true king. Daemon offers both the crown and the Stepstones to King Viserys. When Viserys questions the location of Lord Corlys Velaryon (Steve Toussaint), Daemon replies that he has sailed off the Driftmark. Viserys walks over to Daemon, commands him to rise, and the two embrace.  Applause fills the throne room, and the two brothers are now aligned. At the Godswood, as the family has a feast and the brothers are now cordial, Otto Hightower (Rhys Ifans) has a look of contempt on his face as a known enemy of Daemon.

Rhaenyra and Daemon get some time alone together, and the lingering of glances between the two is quite interesting. Daemon plays with the necklace he gave his niece, and they play catch up over all of these years away from each other. They switch to speaking in high Valerian, and Rhaenyra opens up about Queen Aemma’s death and having to be betrothed to a prince for the sake of the realm.

The Small Council discusses their new conundrum with Corlys. Otto drops a bomb on them that he got word from his brother that Lord Corlys is set to engage in negotiations with the Sealord of Braavos. Corlys plans to wed Laena (Nova Fouellis-Mose) to the Sealord’s son. If House Velaryon enters into an alliance with the free cities, House Targaryen would have to seek their own marriage pact.

As Rhaenyra heads to bed, she finds a bag filled with boy’s clothes in her room and opens it up. Inside she sees an illustration of what looks like a map to an interior hideaway within the walls of her bedroom. She stumbles into a secret room, and within the shadowy walls of the hideaway she sees Daemon, dressed in a hooded cloak. Daemon takes a disguised Rhanerya through King’s Landing. She sees the dirtiness and likely smells the stench of the city. A man bumps into her and mistakes her for a boy.

Meanwhile, Rhaenyra and Daemon watch a play together, and there is a re-enactment of the mocking of a woman becoming the next heir — an obvious slight to Rhaenyra’s situation. Daemon tells her that he think Aegon should be the next heir, to which Rhaenyra says she wishes, for one night, to be free of the burdens of her inheritance.

The next scene transitions to Queen Alicent, whose presence is requested by the king. She’s laid in bed with him emotionless, and it’s quite obvious that the act of fornication for her at this moment is a duty rather than a moment of passion.

Ser Criston Cole is concerned if she is all right, and she’s coy and playful with him. Still physically aroused by her experience down in the brothels, she begins to unbutton her shirt in front of Criston and starts to remove pieces of his armor. Rhaenyra leans in and kisses Criston, and, as he removes all of his armor and clothing underneath, the two have a sexual encounter.

It appears that Otto has his own spiders (similarly to the behavior of Lord Varys from Game of Thrones) to spy on the princess. Otto delivers news to the king that beyond the walls of the keep she was found in a pleasure house and later with Daemon in the bowels of the den together coupling. Viserys’ initial reaction is that this just gossip; however, Otto insists this is true. Viserys thinks that Otto wants the Iron Throne and wishes to destroy Rhaenyra’s reputation. Otto is ordered to leave the king’s presence immediately.

At the Godswood, Queen Alicent confronts Rhaenyra after overhearing Otto’s claims to Viserys. She asks if any of the rumors about what is being said are true. The princess replies that to question her virtue is an act of treason. She claims that all she and Daemon did was go to a show and drink at a few taverns. After she convinces Alicent that the rumors were not true, Alicent scolds her and says it is foolish to get into a situation where her virtue could be questioned.

Meanwhile, Daemon is brought to the king by force. Viserys kicks Daemon while he’s on the ground telling him he defiled his daughter. He questions what lord will marry her now in this condition? Viserys priorities are still over his daughter’s marriage and a potential heir rather than her own personal welfare. Viserys tells Daemon it’s not his daughter he lusts for, it’s his throne.

The following scene is Queen Alicent convincing King Viserys that Rhaenyra is innocent and that Daemon is a liar. Viserys is uncertain as to what benefit Daemon would have out of lying. When Viserys finally confronts his daughter on the allegations, he decides not to disinherit her, but insists that she will marry Ser Laenor Velaryon (Theo Nate). He refers to her as his political headache. Rhaenyra suggests that the king’s hand, Otto, is a vulture.

In the next scene, Viserys confronts Otto and asks him, “How long did it take to choose yourself over your king?” He brings up that Alicent’s betrothal to him was a well calculated decision on Otto’s part. Viserys says that Otto’s judgment has been compromised and strips him of his role as Hand of the King.

In the final scene, the Grand Maester offers some special tea for Rhaenyra in case there are any consequences to her sexual exploits with Daemon.