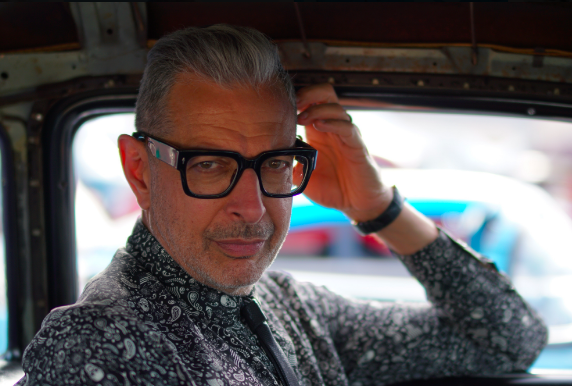 Jeff Goldblum is one of those people who you genuinely would want to talk to every day.

As that is not possible for the majority of us regular folks, the next best thing is a new series titled, The World According to Jeff Goldblum. The 30-minute episodes are Goldblum diving into the everyday mundane and coming up with a fresh and fascinating perspective. We are very excited about this one. Disney+ will house the show on its streaming platform. Episodes will be available November 12th.

BGN got the chance to sit down with Jeff Goldblum during the Disney+ Press Launch. Below are a few things we covered during our time together. The World According to Jeff Goldblum will be available to stream November 12.

How did they approach you to do The World According to Jeff Goldblum?

Well, that wasn’t the original title. Here’s what happened. I did a show a couple of years ago: three episodes of Nat Geo Explorer. Remember Nat Geo Explorer? They were tinkering with the format, so they had people come and do three episodes. We hit it off, and then we got to talking sometime after that, and they said, “Hey, maybe you want to do a show of your own. We’ll do another show, and we’ll do another 12 episodes of these ordinary items, maybe, and we can have extraordinary facets, undiscovered facets, and surprising elements, and maybe you’ll do some hosting of some kind.” As we started to talk about it, I said, “You know, I think I could lend myself in some fun way. I’m in as long as I can just go to work.

You guys are great and I’m interested in that stuff, but maybe I could do it in such a way that’s different, and then kind of personal, and spontaneous. And I don’t want to really read anything and recite anything. Maybe I can talk. And I don’t have to pretend to know anything. I don’t have to be a teacher. I can kind of go, ‘Hey I’m interested in this,’ and ‘Hello, camera people, I’m you. Now people who are watching come along with me and let’s learn about this together.’” That’s how it evolved. We got this idea, and that’s what we made. Then at some time, they go, “Titles, titles.” They said, “The World According to Jeff Goldblum.” Okay, there you go. So that’s how it happened.

What does the world according to Jeff Goldblum look like?

Of course, I’ve got my inner life, my biochemistry, and my mental life, which seems to roam — roam enjoyably. I don’t know why, I just have an ongoing party in my adult brain that I don’t mind opening up about. So there’s that. But also, I suppose, it looks generally like the ordinary mundane world, but then as we look deeper, is the idea that there’s something extraordinary about this glass of water and us being here in this room and certainly for my sensibility and my money, so to speak, the people. You know, people are to me just endlessly infinitely mysterious, and beautiful, and fascinating, and educational. It’s part of my intent, the technology of my acting training, which I had a natural feel for, an interest in. My teacher Sandy Meisner said, “You know, if you want to be an actor, you gotta be interesting, of course, but you’re interesting to the extent that you’re interested.” So you’ve got to make your acting and every moment more importantly about the other person and why they might be or have some hidden story. So this is kind of in line with that.

Do you prefer being yourself on camera or reading lines?

It depends on the part, of course. I’m not right for every part. There are moments in my own life where, you know, I don’t mind. I like to think of myself as including everything. So if there are moments of discomfort, there it is. Don’t deny it. Don’t resist it. Overall, I guess that’s called comfort or contextual inclusion with everything. So there’s that. But having said that, my teacher, once again, Sandy Meisner said that we don’t want to mask ourselves, even though it’s a lie, even though you’re saying you’re telling stories, like the Harold Clurman book called Lies Like Truth.

What you’re really doing is exposing and revealing something personal and something honest and something truthful. So you’ve got to find something revelatory and personal in every part, no matter if you’ve got an eyepatch or an accent or anything like that or a different political persuasion than your own. So, I’ve become comfortable in my humble studies of that over the decades in venturing into my “self,” so-called, and then become more and more comfortable, what with playing jazz and everything, and encountering audiences more and more, talking to them and presenting myself on these talk shows and doing shows like Portlandia and Thor: Ragnarok where Taika Waititi will encourage you to improvise. I’ve gotten more and more comfortable and interested in exploring my own so-called personal voice like that.

So you talked about your comfortability and what you’re willing to do. Is there a limit? Is there something you won’t do for this show in terms of trying new things and being adventurous?

I’m not a daredevil. I’m usually not a daredevil. Although, when you see the “Pools” episode, it may seem like it, but it’s not easy. But I’ll tell you, we went to Raging Waters. I went on one of those things that kind of went like that afterwards [makes a curve motion]. For “Bicycles” I went on a BMX. I didn’t even know what that was. That kind of thing you stand up on. You go over hills. It’s not on camera so much, but we filmed a lot that day. It was a hot day, and I reached my limit. I hit the wall. I must say, I’m fit as a fiddle. I work out every day. But anyway, it was something. But you know, I like to lend myself. In fact, if we do any more, one of the ways to choose will be, “Hey, what would be fun to see me do? What would I like to experience out of my comfort zone?” probably. So I may do more of that, but I don’t want to risk everything. I’ve got two little boys at home. I don’t want to lay up in the hospital. You know, I was in a floatation tank. I went into 45 minutes of sensory deprivation. We did that. That was something. I found myself doing a lot of things.

Did any of the other episodes have a lasting effect on you? Did your experience change your mind on the subjects?

Well, with “Gaming,” I found that at the end I was like, “Gee, you know, part of this technology could be used.” It’s like tools, it’s like paints, or, you know, clay. It depends on in whose hands, but you could do something okay with it. So yeah, there were other things like that. Let me take out my cheat sheet, because I can tell you I was in the NASA Neutral Buoyancy Lab for “Pools” and met an astronaut, a couple of astronauts, who have been up there a couple of times. A couple of women who are training at the end of their two-year training program, who are going into this neutral buoyancy thing. It was the biggest pool in the world. I think they have a replica of the International Space Station at the bottom of it. They go for six hours in their spacesuits and practice all that.

I went in the pool with them and snorkeled around, watched them, and we filmed my talk. It was life-changing. During that experience actually, I talked to a guy who is up in the Space Station currently. From space he called me. It was amazing. I mean, I read books to the kids all the time, and they love it. [My son] Charlie is going as an astronaut for Halloween because he loves it. We’ve been reading this Neil Armstrong book to him. Anyway, it gave me more. I’d never had a hands-on feel for all of that, which fascinates me anyway. Amazing, very moving.

What are you hoping audiences get out of this besides the learning experience about some science aspects, but also about you?

Well, I do reveal a lot. I’ve been on talk shows here and there and talked in my own voice at the gigs, you know, answered any questions. I’m kind of an open-faced sandwich. But this, with these particular portals into my experience and oftentimes childhood and past experiences where I’m specifically talking about them, they may get an enhanced view — for what it’s worth, until they lose interest completely or, better, I disgust people entirely.

Now I’ve got an enhanced view of what’s going on in me and what I’ve been through, and toward that end the wonderful producers and editors — thank goodness — they separate the wheat from the chaff. I tell stories and sing songs, but we get the good moments on screen, hopefully. I unloaded all my family albums, a couple of which are included when relevant in a couple of episodes. Likewise, I had a couple of reels that I thought were lost, but I found my home movies from Pittsburgh in the 1950s and ’60s — you know, those silent things. I saw a cut of “Pools,” as a matter of fact, that includes me at three years old, then maybe 10 years old, so you know you’ll get enough to get your fill of me.

What did you learn doing this about your own fans?

Well, they’re very sweet. They’re, you know, generous, and they want to take pictures with me, and I like that. I like taking pictures with them. Then I go on my Instagram and see if they’ve posted them, see what they said. I play these gigs — we went to Chicago and we went to Pittsburgh, we went with the band prior to this. Going to these other places was really interesting. Some that I met knew me, but people were very sweet. But soon enough they realized that I’m interested in them, more than even myself. The preset is they’re interested, of course, in this thing that we’re both interested in. So we get to talking authentically about that. It’s good.

I like this show. I’m proud of it and, you know, it was a good way of using my time. I liked it.

The World According to Jeff Goldblum premieres November 12, 2019, streaming only on Disney+. New episodes will stream every Friday.