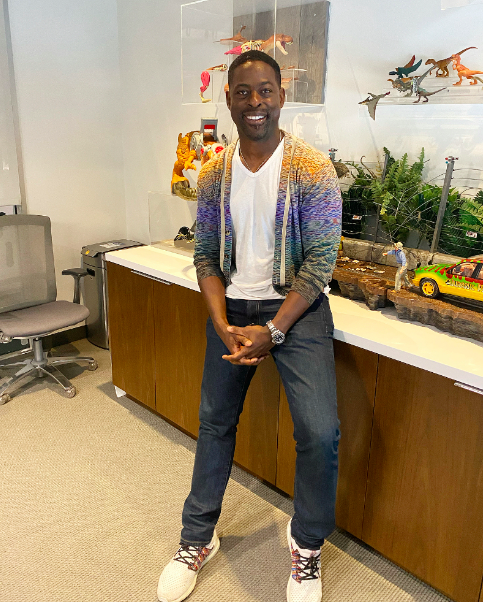 While I remember him back in the day from Supernatural, he has lent his talents to popular films like Black Panther, Hotel Artemis, Frozen 2, and most recently Waves. He is also blessed to have been recognized for his roles on TV in series like Army Wives, American Crime Story, and currently everyone’s favorite cryfest, This Is Us.

Speaking on his current role as Randall Pearson on This Is Us, BGN got to chat with Sterling for a special conversation about this week’s hot-topic episode: mental health and the stigma surrounding it in the Black community. Randall is battling with anxiety this season and has pursued professional help. It’s a topic that needs to be discussed, as African Americans may be reluctant to discuss mental health and treatment. There is a shame associated with such conditions that Black people, especially Black men, still find holding them back from seeking help. Many of us would hear the phrases, “Snap out of it…” or “Pull it together,” or we’d ignore it altogether with the help of drugs or alcohol. So often young men find asking for help synonymous with words like “weak” or “sissy.” So often our people experience more severe forms of mental health conditions because of unmet needs or barriers like exclusion from healthcare, education, and resources.

Sterling approaches the topic with a more personal touch having dealt with mental health issues in his own world. “So, I have a few members in my family, who are living with different mental illnesses ranging from schizophrenia to bipolar to anxiety. And I know what it’s like with them to navigate a world in which on the outside, they seem normal, like the wounds aren’t readily visible.”

Sterling continues by talking about how people expect certain things from them. When those expectations aren’t met, there are feelings being pushed on them of being outside or weird. There is a quote that comes to mind from the film Joker: “The worst part of having a mental illness is people expect you to behave as if you don’t.” As Sterling notes, “There needs to be a degree of reach for us as a society to meet them where they are, instead of expecting everyone to meet you where you are.”

Sterling relayed how important it is to him to show people who are living with mental illness while still having productive lives. He wants to be able to be an example for someone who may not think it possible for themselves. “While Randall falls outside of this point of view of being socialized by the Black community, there’s this idea of you take care of your stuff. You deal with your own. And in a way, that gets it done, because yes, the world is hard. You are Black in this country.” There are certain things that Black people have to deal with that “mainstream counterparts,” as Sterling put it, do not. “But it doesn’t mean that you have to soldier that thing by yourself. Communication is a big part of where so many of us get wrong. Being able to talk to someone is soul mending. We have all heard that we shouldn’t keep things bottled inside, yet no one wants to hear it when it comes out.”

While Randall is a character that Sterling plays, the idea of therapy or just the act of talking to someone is something that he is familiar with. The goal of talking to someone is a way to deescalate things just enough that you can go about your day. Sterling has a best friend who he’s known since kindergarten. “We talk to each other almost every day. And I know I’ve saved on my own therapy bills because I have my boy to talk to.”

Finding that person who loves and supports you while giving that constructive criticism can make a difference, but a professional view is also important. For some, even when the resources are available, there is still that stigma that hangs around. “At Stanford,” says Sterling on his alma mater, “we had this thing called CAPS, which was counseling on campus and you had to reach out for it. But there was the stigma just to go. If somebody went to CAPS, you never told anybody that you went.”

Sterling was not afraid to tell us firsthand about his experience with therapy. “I found it to be beyond beneficial as an individual, as a married person, even when things are good within marriage. Sometimes you need an objective person to be like, ‘Y’all just missing each other, just a little bit.’”

There is helpfulness that comes from an objective third party. We all have a tendency to give advice. This is especially true for those who grew up in a religious household. The end-all is to pray, talk to the minister, repent, and we will be told what do or the best way to fix it. “I feel like so many people feel dismissed or unheard because they’re like, ‘Yeah, you’ll be fine,’ or something like that,” says Sterling.

Sterling is proud of his character on This is Us and proud of the writers who thought to put a character like this out for people to see. The show not only showcases Randall dealing with his mental illness, but also showcases how the people around him handle it. “I felt like Jack [Randall’s father] did the best that he knew how, because Jack is not a big open human being himself. So Jack was like, ‘Get out and run and it’s going to be okay.’” Sterling continues, “I love that I get a chance to raise a son who has no sort of stigma attached to the idea of going to therapy.”

This Is Us is a beautiful show that is structured so well, paralleling the real-life with the art. “You get to see these people now getting to the same parts of life and recognizing that they’re figuring it out,” says Sterling. Telling stories with these universal can help people see themselves in these stories.

You can catch Sterling in Frozen 2, now available on DVD/Blu-ray, and on This is Us airing Tuesdays at 9:00 p.m. on NBC.