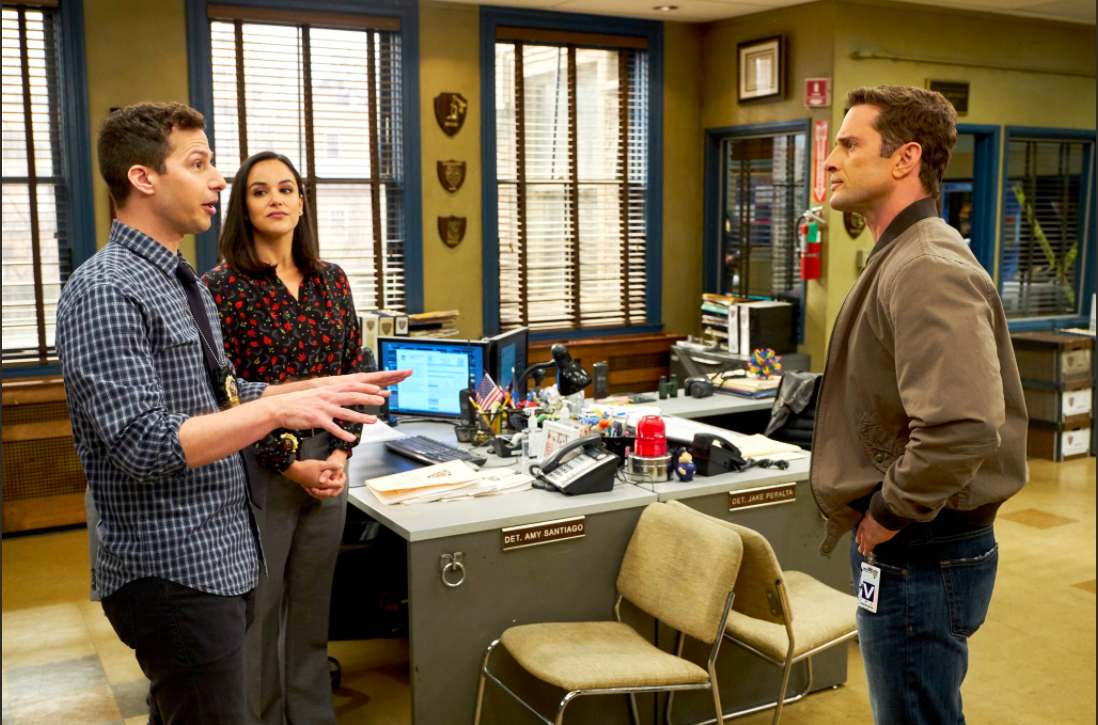 This week, our girl Amy (Melissa Fumero) anticipates moving onto big thing. So Jake (Andy Samberg) plans the perfect case for her that gets hijacked by Melissa Furemo’s real-life husband, David Fumero.

Amy has passed her Sergeant exam and to celebrate/ commemorate their last case together as detectives, Jake presents her with the perfect case: a serial arsonist who leaves crosswords behind as clues. He calls in her celebrity crush, crossword writer, Melvin Sternly (OF COURSE that’s her crush) played by David Fumero, to help them get a more in-depth look at what the clues might mean.

Charles tries to warn Jake about the perils of introducing his fiance to her celebrity crush. Jake isn’t worried because he thinks Melvin is going to be some giant dorky loser. Turns out, all of Melvin’s muscles are strong (including his brain) because he’s super smart and super hot.

Much to Jake’s dismay, Amy and Melvin really hit it off. Charles tries to call him out for being jealous but Jake rejects the idea. He calls jealousy an ugly emotion.

Jake, Amy, and Melvin go to a puzzle bar (which is either lame or amazing) to see if they can find any of Melvin’s enemies or any chatter hinting to an adversary. In the bathroom, Jake overhears two puzzlers talking about Sam Jepsen. Sam is a puzzle writer who was demoted allegedly because of Melvin. Melvin provides an alibi for Sam, who happens to be his friend.

Melvin suggests they stakeout certain street corners based on some puzzle logic mumbo jumbo (tbh, he explained it but it was boring). Jake thinks it’d be better to address the case like a cop and go after the only suspect with a motive (Sam). Since it is “Amy’s” case, Jake asks her to decide between the two plans.

She chooses Melvin’s because this is his world, and they need to think like him. This fuels Jake’s jealousy even further. Jake is determined to do things his way. So, while stationed at one of the street corners, Jake sends Charles to tail Sam. Later, Jake goes to check on Charles and Sam, and they realize Sam is innocent. Jake heads back to his post where (to no one’s surprise) the abandoned warehouse he was supposed to be watching is on fire.

Back at the precinct, Amy is pissed (rightfully so). Jake gives the typical “I’m jealous because of my insecurities” speech. Just as typically, Amy forgives him. Using his police skills, Jake realizes that the arsonist is trying to spell out marry me. They discover she is one of Melvin’s obsessed fans.

Gina has appointed herself Captain Holt’s Campaign Manager for his Commissioner race. Her first order of business is to inform him that all of his competition is old, white, and male (which, in all honesty, is a pep talk because Captain Holt is the most dynamic contender). Later, at the lunch in, Gina and Captain Holt (the two shadiest people at the 99) discover that there is another person, Captain Crawford, running for commissioner. SHE is younger and full of dynamic ideas.

Feeling threatened Captain Holt talks to the head of the selection committee about Captain Crawford, but he tells Captain Holt not to worry.  Apparently, they only nominated her to fulfill a diversity quota. They have no intention of appointing her.

Captain Crawford stops by the 99 later to thank Captain Holt for standing up for her, and to let him know the selection committee has been replaced so he better bring it.

Right before watching this episode, I saw a Tumblr post with images of jealous Jake from past episodes, and it’s a lot more internalized. His slight irrationality here is dramatized which is interesting considering the differences in their relationship. I appreciate that they acknowledge the dumb guy – smart girlfriend troupe, but the fact that the storyline was included anyway is annoying.

Jake undermining Amy’s authority because he felt insecure didn’t sit right with me, maybe because it hit too close to home? Or perhaps because she forgave him too quickly? I really can’t place it. In a workplace setting, it’s a frustrating thing to deal with as a woman and instead of acknowledging that, and the dangers associated with it, the show centers on Jake’s feelings.

Captain Holt’s storyline was the opposite of Jake’s in terms of his reaction to similar circumstances. Despite Captain Crawford being his competition, he openly called out the blatant sexism working against her and refuses to participate until changes are made.

He basically required an inclusion rider for the NYPD.

Captain Holt’s storyline really saved this episode for me. While Jake is hindering Amy from doing her job because he’s insecure, Captain Holt is putting his career advancement on the line for a woman he barely knows.

I feel like Gina and Captain Holt spend their downtime shading people in the precinct and if not, they should.

I’ve come to the conclusion Jake and Amy might have a sub-dom kink? Based on her bending his arm back and him telling her to “do it harder”. I’m here for it.

Captain Holt is a bean stan.

“And I was actually abandoned, they found me in a swamp.”