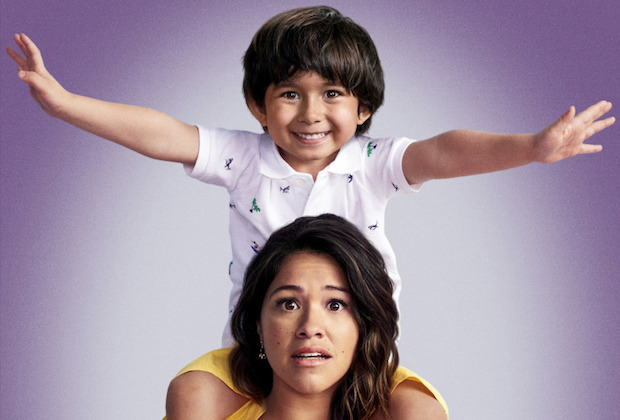 Last week’s Jane The Virgin rekindled old flames, resurrected old rivalries, and gave us an alter-ego for “mom Jane” in a fun episode reminiscent of season 2.

The fact that the episode was curiously devoid of Adam’s narrator may signal trouble in paradise, but the alter-ego theme gave us something fun to latch onto while Jane struggles to balance her responsible side and her more relaxed side.

Adam may be heading to a new job soon (he was offered a position, he tells Jane)! Jane decides that she’s ready to sleep with Adam, but not yet ready to introduce him to Mateo until she’s sure that he’s mature enough (Adam, that is). Though she’s been having a great time being “fun Jane” around Adam—complete with some beer pong—part of her feels that he’s not quite serious enough to integrate into her “mom Jane” life, even though she steadfastly bristles at Alba’s denouncement of him as a hooligan. Xo convinces Jane that she doesn’t have to know where their quasi-relationship is headed in order for Jane to have sex with him, so Jane heads to Adam’s. There, they play roofball and Adam accidentally locks them out of the building, causing them to jump off the roof to walk back down, but Jane fractures her leg on the way down. At the hospital, she gets painkillers that cause her to sleep through her appointment for Mateo’s new prospective school. She wakes up to find they’ve given Mateo’s slot away, and a distraught Adam tells her that if she hadn’t been compartmentalizing, he would’ve ensured she got to the appointment on time.

Though Jane makes up with Adam and tells him not to leave, it seemed forced to me, even though what she emotes on-screen feels like classic Jane.

Back at the Villanueva household, alter-ego Rafael has re-emerged. I say re-emerged because it’s “douche Rafael” the hotelier, who is back in full force trying to re-claim the Marbella from Louisa and Anezka. Though Jane’s almost at her wit’s end, Alba has rose-colored glasses and even tries to convince Jane to get back together with him. Even if Jane were interested, he and Petra have rekindled their old…erm…perhaps “passionless partnership” would be the right sentiment going by our narrator’s announcement that their efforts at communication have made them boring. He may have been right, considering that they’re broken up by episode’s end. Rafael then moves on to romancing another hotelier—out of spite or brokenheartedness remains to be seen—signaling the demise of “zen Rafael” true return of his douche-y alter-ego.

The teaming up of Rafael and Petra was brought on by the fact that Louisa and Anezka were attempting to buy Rafael’s shares by hilariously getting Anezka to pester Petra to death. Petra and Rafael’s counterplan was to hire another hotelier to act as a public face while they used funds from the kids’ trust funds to buy out Louisa and Anezka. Now that they’ve parted ways romantically, and most likely professionally for a time, it’ll be interesting to see the bidding war I assume will come at Louisa and Anezka from both sides.

In addition to the comic relief that is Anezka’s mixture of flattering and annoying her sister, Rogelio’s TWO archenemies are back in his life (as if Darci’s insults aren’t torture enough). The network decides that since Rogelio can’t work with Fabian, one of them would have to go. The network holds a focus group to determine who will be killed off. In a rare display of restraint and true deviousness, Rogelio goes undercover as an older woman to infiltrate the focus group after learning that Fabian’s grandmother is unfairly swaying it in her grandson’s favor. He executes the role flawlessly, and wins the right to continue on with the show, a triumph which he then lords over Fabian while still in costume.

Ro’s victory is short-lived, however, when Fabian is replaced on-set by Esteban Santiago, who appears to be flirting with Darci (*gasp*).

Speaking of Darci, hands down the best performance of the episode goes to Xo! She absolutely told off Darci for being ungrateful and downright mean to Ro, especially considering they opened their house to her and “wait on her hand and foot”. Xo’s reassurance that they’ll be there for Darci despite her horrendous general personality because “they’re family” was one of the best moments of this episode and is quite a testament to how much Xo has grown over these four seasons.

This episode was really enjoyable to watch, even though most of the true drama seemed to revolve around Darci, in my opinion. (Everyone else’s drama was relatively mild and fun to watch.)

Don’t miss a new Jane The Virgin tonight at 9pm ET/8pm CT on The CW!

‘Black Lightning’ Will Be Back! CW Renews 10 Shows For New Seasons

Warping Through Time With Mateo On ‘Jane The Virgin’