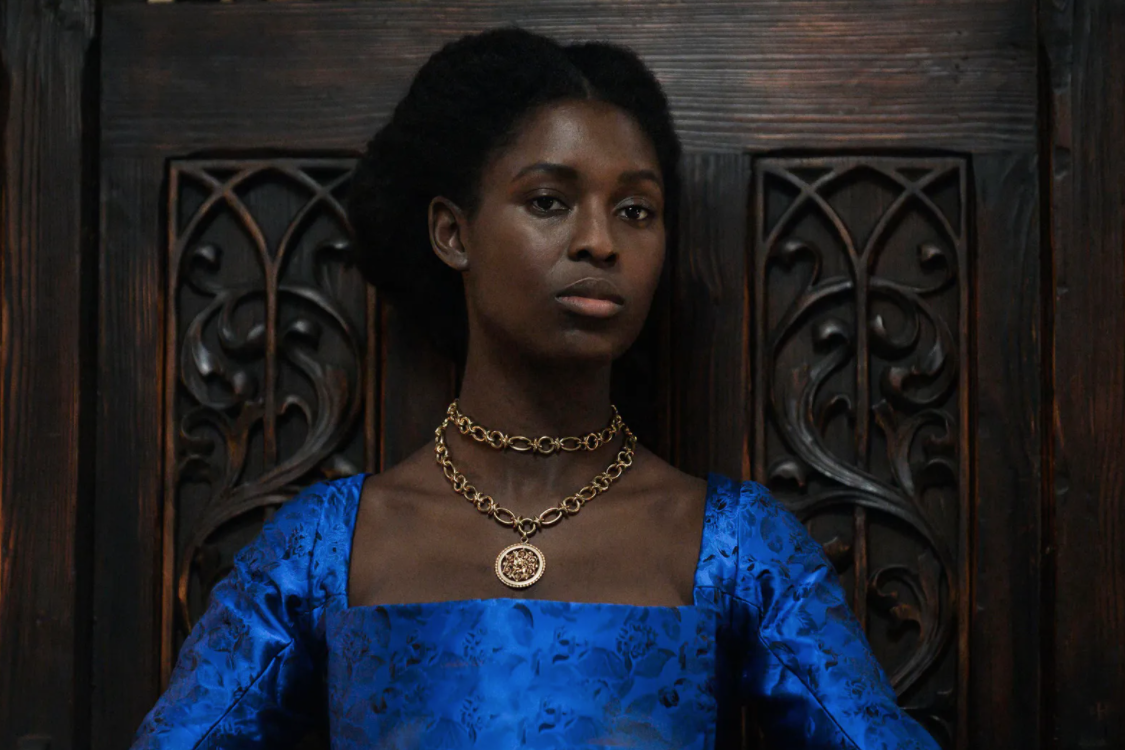 Jodie Turner-Smith says AMC+’s miniseries Anne Boleyn is a story about the tenacity of women and mothers. As a young mother herself, the thought of playing someone so devoted to the safety and security of her daughter was not an idle one to Turner-Smith. Anne Boleyn does tell the story of the ambition-ridden, infamous second wife of Henry VIII, but Turner-Smith felt it was more important to tell the story of a young mother trying to make life better for her children.

“I was really blown away by the script!” Turner-Smith explains thoughtfully during a phone interview. “Anne is always portrayed as this seductress, and there’s never really any sort of thing that unpacks her intentions.”

This is true. The first time I’d heard of Anne was in The Other Boleyn Girl starring Natalie Portman and Scarlett Johansson. Even though Anne is a large part of the narrative, the film revolves primarily around Mary, Anne’s younger sister who held the king’s infatuation. That film is melodramatic, so Anne comes off as conniving and manipulative. She’s not quite the villain, but you get the feeling she earned her disastrous fate.

Turner-Smith knew there was more to her story. “I thought of it as a mother’s story, I saw the film through the perspective of all the mothers in the story. Women were and are still doing what we can to survive under the limitations placed upon us by patriarchal society. I began to think, perhaps everything that you think of her is coming from the perspective of a man.”

The idea of the Anne Boleyn story being a metaphor for how to succeed at life as a woman is something that should have been obvious, but it’s been left out of the difficult queen’s narrative.  AMC+’s Anne Boleyn offers a woman who is powered through a mixture of dignity, cunning, and savviness that turns Anne Boleyn from just a historical figure to a fully fleshed out and relatable person. It’s a feat Turner-Smith pulls off beautifully, portraying Anne with equal parts vulnerability, cunning, and caring. Add a dash of “dignity…always dignity,” and you’ll have a good idea of what the ill-fated queen could have really been like.

Turner-Smith was cognizant of many factors in her portrayal. “As me, as a woman, as a mother, as a married woman, as an adult woman in society, how would I respond to these limitations? What would I do? This was a woman who was going beyond what even women expected they were capable of then.”

The series certainly shows Anne going above and beyond to secure her spot but not solely through the window of seduction. Anne has a fierce political mind and ability to suss out the motivations of those from whom she’s most at risk.

Turner-Smith is near Boleyn’s age when the events of Anne Boleyn the series occur. It’s an interesting thing to think about a woman so young but also bearing the brunt of responsibility for providing a growing nation with a male heir. Anne comes into power and immediately spends the bulk of her energy avoiding having to cross the bridges she’s already burned. Turner-Smith is aware of the negative responses to female ambition and used that desperation in her portrayal.

“I think when it comes to women,” she says, “this concept of being ambitious is always treated as a dirty word. And that, I think, is a major hypocrisy of our patriarchal society.” The court during the Tudor dynasty certainly was patrifocal, even when women were at the helm. “One of the things that really appealed to me about this — storytelling aside — let’s not pull any punches about this idea that there was much about her that was ‘unlikable.’”

We’re over the phone, but I can imagine Turner-Smith cradling her cell against her cheek and making finger quotes in the air along with a not unkind rolling of eyes.

“Anne spent all of her girlhood in the French court surrounded by powerful women,” she went on. “So it’s easy to see how she would have fared on that and how she would have come back to England with different ideas about what she was capable of.”

Turner-Smith’s Anne carries an entitlement on her shoulders as she stands head held high and defiant. And it’s not unearned. Though the story itself is inspiring, it’s also, sadly, a cautionary tale. How else does one make the most out of an impossible situation? For Turner-Smith, it was important that she showed just how intelligent Anne was. “I want people to see how smart she was, and how invested she was in wanting to be great. She wanted to make Henry great. As long as she was his wife and if she made him great, that would make her greater, and her children.”

It’s not an unrelatable concept, wanting your offspring to be better than you, the best in the world. In Anne’s case, despite some setbacks, she eventually got her wish. Her daughter Elizabeth was the last monarch of the Tudor Dynasty and served over four decades as queen of England.

Anne’s actions were nearly prescient even though they frightened the people of the day. Turner-Smith thinks about the effects of Anne’s cunning and how those resistant to change, especially from a woman, would react. “The filmmakers and I wanted people to see Anne making political moves, but it not just being about her sexuality or her having their heir, but about the fact that she was trying to bring great thinkers to England. She was interested in great artists; she was interested in pushing forward the culture. She really wanted a partnership between her and Henry and wanted to be seen more as just a walking womb. And that made her dangerous.”

As the days towards her inevitable death approach, the lighting of the series becomes darker and more stark. The days are overcast, and the once soothing birdsong becomes piercing shrieks in the night. So too does Anne’s countenance become clouded in gloom. She remains proud and defiant, but something in her knows to prepare for her mortal end and her immortal legacy.

We see Anne have a conversation with the character that represents her end, and she assures them that they’ll never be rid of her. That every time someone speaks their name, they will instantly think of the ways they tried to undo Anne and the ways in which they failed. “She was that queen, she was that b*tch!” Turner-Smith laughs as she speaks in awe of this real figure. “She was manifesting this destiny for Elizabeth, and I love that she has become this immortal figure. Her story has been studied over and over and it’s endlessly fascinating.”

It certainly drew Turner-Smith’s attention. “When we look at her in a modern context, what she represents is a woman who pushed against the patriarchy in her time. Think about how dangerous it was! She lost her life for it. She was definitely really f*cking bold, and women who are bold when times are dangerous are so impressive to me.”