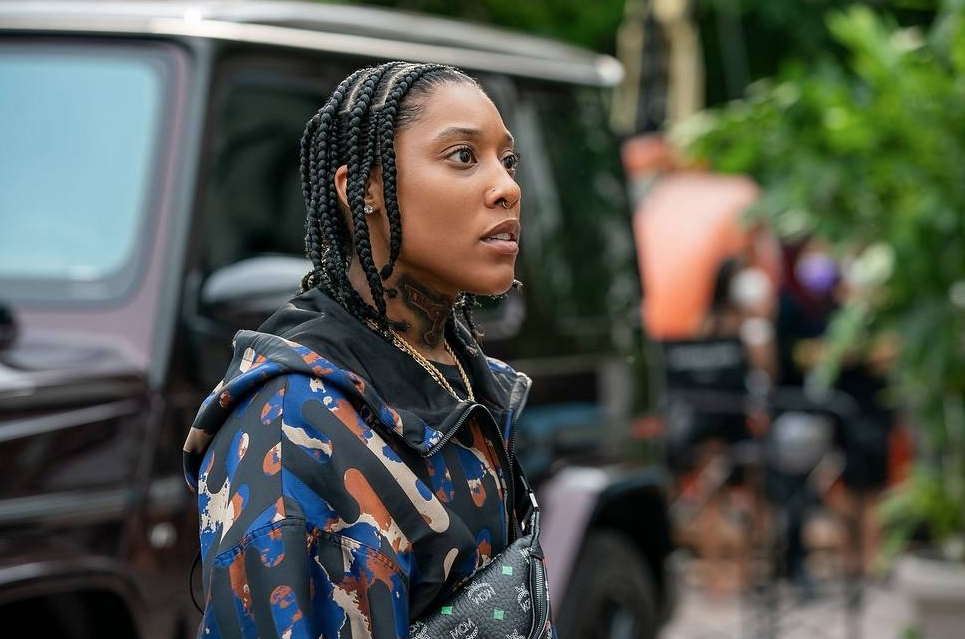 How did your experience as an athlete prepare you for working in the entertainment industry?

Team sports prepared me to be around other personalities. I learned quickly playing basketball that, even if you don’t like a teammate once you hit the court, that’s your family. Now, working in the industry and working in life, I can be around people I don’t care for and I know we’re a family once we’re doing something together. I can put aside differences and create greatness.

How has the shift from reality to scripted been for you?

I love it. I got my fan base who loved me and who hated me from being on the show (Bad Girls Club). I also love that now it’s not about Jonica; it’s about Chastity, the Duke. I love playing her.

How did you prepare for the role?

I prepared for the audition process with a few family friends. They were just amazing. As far as me embodying Chastity, I didn’t have an acting coach. Chastity seemed familiar. When it comes to the LGBT community. I’m more like femme. I will wear heels and dresses and things of that nature. Chastity is more dominant. So I could open up a little more of that tomboy part of myself. I didn’t even shave my legs. I was like, “Hey, you have hair all over her like she’s real n*gga.” I called friends who are dominant lesbians, checking their mannerisms. I wanted to do them justice. I wanted them to be proud. And I know that even though they know that I’m not like that, I represented them to the fullest. The reviews back that. I’ve seen good stuff they all, like, “Oh, you kill it.” They love how I represent them.

The camera work of this show is incredible. How is that from your side?

Shout out to the camera crew; shout out to the cast who were just figuring it all out. Shout out to the director and the creators for even thinking we were capable of doing such a thing — because it wasn’t difficult, but it was different. You have to remember where your arm is and hold it to fit your line while still in character, and try to navigate with this camera because it wasn’t a cell phone. But we got so much help. We all worked as a team. You got the cameraman, with the big camera. You got us working as a team to help. It was a lot of work, but it looks effortless. It works.

What has been the most valuable lesson you’ve earned while on set?

Time management and preparation. You can practice and study your lines, and then they could change, and you learn to just be ready. When things change, the time you take to complain about it is wasted time that you could be learning. You can complain, but it’s not gonna go away. You still got to do those things. So you might want to just do it with a smile and say thank you. Yes, I learned that things can change within seconds and you just got to be ready.

Love that. Tell me about that line you “improved” in the pilot that stayed in the show.

Oh, yeah, in the pilot. I knew the lines, but they kept switching the action of how I was gonna get the drugs from the guy. So I’m more focused on making sure I shake his hand and do everything right to get the drugs in my hand. They said action, and my line was written, “We got party favors,” but I remembered drugs from what we were just talking about during the blocking. And I said, “We got drugs,” instead of, “We got party favors.” We were filming upstairs, but down the balcony, you could see the video village where Issa, Serena, and everyone were sitting. I leaned over and said, “Issa, I’m sorry.” She said, “No. We love that line.” And that’s the take they used in the show. I love my mistakes. That’s what acting is, creating. Of course, you want to stay within the lines of their asking, but sometimes they just want to see what you bring to this character. There’s what’s written on paper, but they want to see how you will make them come alive, whatever your character is.

What do you find to be the most intriguing about female MCs?

I was talking to a friend about this, and she said it’s like we’re in a bad bitch renaissance. I said, wow, that’s really what’s happening, and it’s coming out more and more. I can’t just say it’s just now because we got to give it to Little Kim, Foxy Brown, and Queen Latifah — they were all doing it as well. I love that female rappers are talking about women standing independently and still having love. They’re making other women feel good about being whoever they are. I love that you have some full-figured rappers; some are slim, some dark, some light, and those rappers are pouring into who they are and what they have. It’s making us women who weren’t rappers be like, “Oh, I do look good, if I’m a little heavier. Oh, I am good, and I’m chocolate. Oh, my natural hair.” Megan Thee Stallion just dropped the album, and she said, “My natural fro and my pretty right toes,” and I’m like, That’s me. I gotta throw in some pretty right toes. You know? It makes us feel good as women to know that. They’re not catering to what sales are; they’re catering to who they are. I believe we’re all for all people. Just be who you are. Because somebody out there resonates with you.

How has being on the show improved the quality of your life?

I’m getting respect from an acting standpoint from the acting community, and I love it. My thing has always been playing basketball, and I don’t play basketball anymore. It feels good to know that my acting and my craft, my career, is respected.

Watching my mother be proud is another level of joy. I feel honored just to be able to show my parents that they did a good job on me.

Season one of Rap Sh!t is streaming on HBOMax.