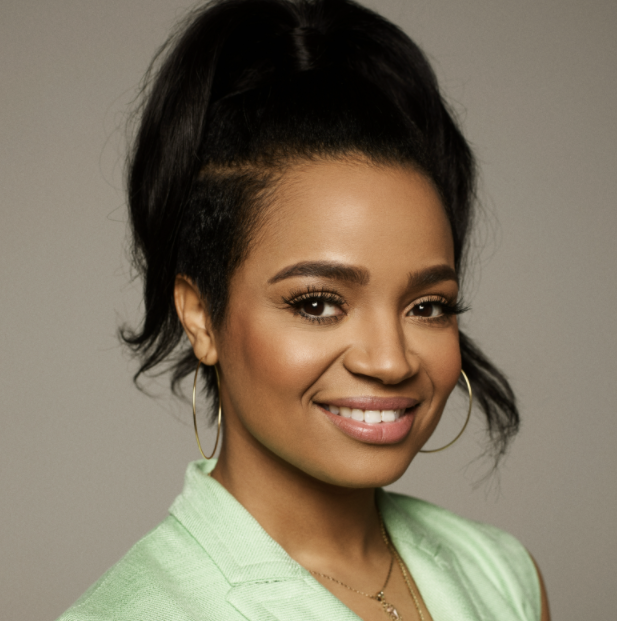 Kyla Pratt has been gracing TV and movie screens for decades, filling many childhoods and teenage years with laughs. One of her most iconic shows, The Proud Family, first aired on Disney Channel in 2001, one of the first animated series depicting a Black family. Now over 20 years later, Pratt and most of the original cast have reprised their roles in The Proud Family: Louder and Prouder, with the gang picking up nearly right where they left off. BGN chatted with Pratt over Zoom on February 24, 2022 about jumping back into the shoes of Penny Proud.

The Proud Family: Louder and Prouder premiered February 23. What have fan reactions been like so far? How does it feel to finally have the project out there?

I’m super excited for it finally to be released. I have been telling everyone ever since The Proud Family went off the air I have someone asking me why and when it’s coming back, and why don’t you guys revive it. I’m usually like: “Hey, stop yelling at me [laugh].” Then when we announced that we were going to do the revival, the pandemic happened, and so now everybody’s at home, like where is this? Where are the goods?

We started recording from our homes, in our closets, with blankets and pillows over our heads, trying to make sure we got the right sound. Eventually, we were able to go into the studio. So finally, this day has come, and it seems unreal. It’s ridiculously exciting. I feel like most of the reactions I’m getting are that everyone loves it. We have a few people who are like, why don’t you guys change this or change that, but we had to upgrade it a little bit, honey. The show can’t be the same. I’m loving everything that I’ve seen so far.

You and your castmates attended a virtual premiere a week before the release. You mentioned on Instagram that you hadn’t seen many of them in person in years. What was it like to be back together again?

It was amazing. I want to say the week before, we all had to do press together, saw each other on Zoom, and it was just smiles and so happy just to be in the same Zoom room. So getting to come together for the virtual premiere was the cherry on top of the sundae. It was everything and seeing these people whom I had not seen in over a decade, and then you fall back into the place of just love. It felt like I hadn’t seen them in 20 minutes, let alone 20 years.

To me, that’s a definition of family that you made when you don’t have to see each other and talk to each other every day, every week, but when you come together, no matter what the love is the same. The company that put together the virtual premiere was just absolutely amazing. So everything about it was just top tier, and I had so much fun.

Now your character is a little taller, a little more curvaceous, and more outspoken with her dad. What is it like playing the character in a more maturely?

It’s a lot of fun because the first time I played this character, I was 14 years old. Now being a grown woman and really knowing myself and then being able to jump back into a character that I feel like so many people can relate to, that we were all teenagers at one point. It’s not difficult to be able to be Penny. I feel like Penny is so much of me, and I’m so much of her. It has been an amazing experience, especially as an artist, to be a part of something 20 years ago and then get to go back and see how you’ve grown because you’re doing the same thing, just a little upgraded.

I knew that this show would still have the same essence because we have Bruce Smith and Ralph Farquhar who are the producer and creator. I’m so happy that it’s a different level now. We have dolls, and we have all this different stuff. I don’t remember it being so celebrated when it was just coming out. So it’s a lot of fun to be able to play her again. I haven’t lost the 14-year-old voice, so I didn’t have to change much.

The cast and guest star list are star-studded. If you could have anyone guest star, who would it be and why?

I think the first person that popped into my head would be Eddie Murphy. Of course because he’s like my dad from back in the day. He’s just the legend that he is and the voice work that he has done throughout the years. I think it’d be hilarious.

For many people, particularly Black households, the original was iconic. Having a Black family cartoon was not something common at the time. Now that you have daughters of your own, how important is it for you for there to be more Black animation on TV?

Representation to me is ridiculously important. While I was filming Proud Family back in the day, I didn’t connect that this Black family was on TV. I was like, oh, this is a normal family. This should be on TV. I didn’t realize that it wasn’t happening yet. I realized as people started to come up to me and started to tell me how much they relate it to it and how much they love Penny and who she was. That’s when I started to realize this is way bigger than I thought it was.

What I love about the revival of The Proud Family is that we’ve added so many new characters. They show representation in so many other ways as well because to me, mental health is one of the most important things in our lives, if not the most. If you’re able to watch something or see someone that reminds you of yourself or looks like you or acts like you, that helps you not feel alone in that moment and realize there are people out there like me.

You also have another show called Call me Kat on FOX. Tell me about your character Randi and working with your castmates.

My character Randi is a know-it-all, she’s cool. She’s the complete opposite of our lead character Kat played by Mayim Bialik, so to see them together is hilarious because we have nothing in common. I enjoy finding the time to figure out ways to make people laugh and to be able to do that with such an amazing cast. The chemistry is amazing. We bonded so quickly, and a lot of us were like, wait, did I bond so quickly because I’ve been in a pandemic and I’m yearning for interaction with other human beings, or are these people just amazing [laugh]. I’m surrounded by a bunch of talented individuals who come from different walks of this entertainment industry.

You can stream The Proud Family: Louder and Prouder now on Disney+.

Exclusive Featurette for ‘The Proud Family: Louder and Prouder’