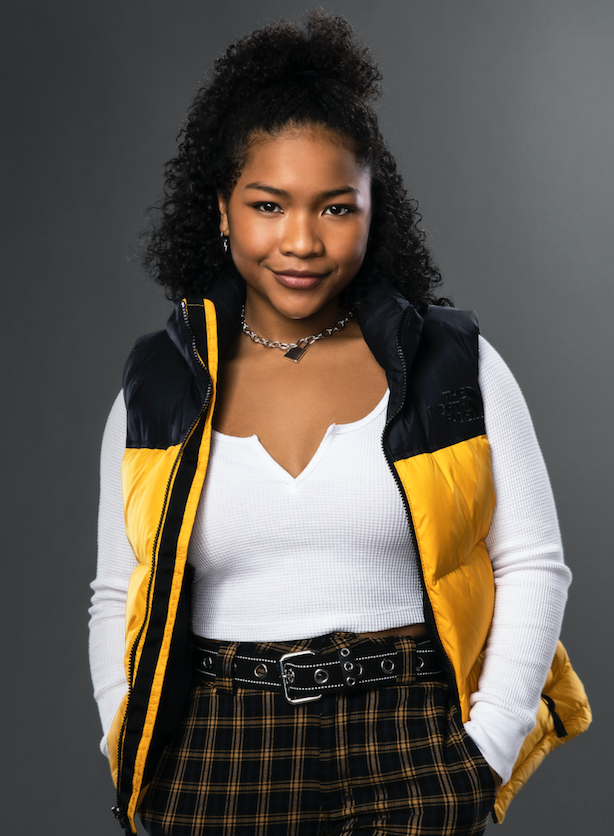 In The Equalizer on CBS, Queen Latifah stars as Robyn McCall, a former CIA operative with an unlimited bank account and a thirst for righteous vigilante justice. Laya DeLeon Hayes plays Delilah, the gutsy teenage daughter of the multi-hyphenate icon. In the Season 1 finale, Delilah discovers her mother’s undercover secret, which brings a fascinating dynamic to the hit network show. BGN spoke with Hayes about Season 2 and life as a series regular via Zoom.

What’s been the best part about working on the show?

Playing Delilah has been the best. I am grateful to be able to play a character who is so different from who I actually am. I love people, and the bond that has formed between the cast and crew is wonderful. With the pandemic, when we first started the show it was difficult to get to know my castmates and our crew. Thankfully we’ve all been vaccinated and we’ve been able to deepen our relationships this season. We even get to hang out after work. It’s been a real blessing.

Now that Delilah knows what her mom really does, how is she dealing with the new dynamic in their relationship?

The dynamic has definitely shifted. We started off the first season seeing Robin and Delilah with this weird daughter/mother relationship where they’re not really used to one another. As the season progresses, you get to see those walls begin to come down. They begin to find an understanding between each other — until that season finale, of course, when everything just explodes. It’s very overwhelming for Delilah. That’s the first time she’s really had to experience anything so serious.

In the second season, we’re coming back right where we left off. Delilah is in a very overwhelming headspace as she tries to process everything. She’s forced to grow up and mature. I think you’ll see especially in Season 2 that the walls between Delilah and her mother come right back up. Now they’re trying to regain that trust once again and establish almost a fresh start. It’ll be an interesting season to see. I think people are gonna be surprised at how Delilah internalizes this truth she’s just found out about her mother.

Do you face any artistic challenges playing this character? If so, how do you overcome them?

Every character that I’ve played, there’s always been some sort of challenge, especially as I am just growing in my career. I love the challenge. I think that’s why we actors do what we do, so that we can be challenged and find a way to trust ourselves even more. But it gets hard. When you’re an actor and you go through a lot of rejection and you do internalize it, there’s an imprint. Then there’s self-doubt and having to remind yourself that everything will be okay. I always go back to those principles and that thought process. Whenever I feel overwhelmed or when I’m going through a challenge playing Delilah, I always remember to let go and to trust because some of the best things happen when I take my hands off of it. So yeah, I think that’s when the magic really starts — when you just let go.

Tell me about the best parts of working on network TV and doing voiceovers and commercials.

In network TV, you have a little more time to actually get to know one another and create relationships because you’re with the same people every single day, or at least once, twice, three times a week. I’ve always loved that aspect of making TV and film — the fact that we’re all a team. I have this opportunity as a series regular, and I’m really taking advantage and soaking it all up. But the best thing about voiceovers is expression through voice. You can be the wildest version of yourself or your character, and nothing is off-limits. And this is just straight upon us. Literally, my favorite thing working on commercials is the food!

I thought you were going to say the money!

No no, no, the food definitely. I don’t know why food on commercials is so good. I worked on series and on voiceovers, but on commercials, hands down that food is the best.

Come through craft services! So, in Season 1, you were shooting in New Jersey. Now you’re in Brooklyn. Tell me the differences between shooting in Jersey and Brooklyn.

As a social justice advocate, how are you utilizing your visibility to support the movement?

Our show has been very great at taking headlines from the news and making them a storyline in the episodes in our show. A lot of the people who come up to me are Black women, and it just goes to show how impactful our show is for them. I know that’s what makes our show so important and so relevant and needed for right now in today’s day and age. Roles like this one are powerful because we can actually make an impactful message. We can be heard.

What’s bringing you the most joy these days?

Just being able to work on set brings me joy. Also, little things, like watching a TV show that I love. Oh, and listening to music is kind of like therapy for me. Sometimes I’ll go on a run and I’ll have the perfect song in my earbuds, and I’ll be like, dang, I feel really happy. It’s a little cheesy, but little things like baking cookies that taste delicious give me some serious joy.