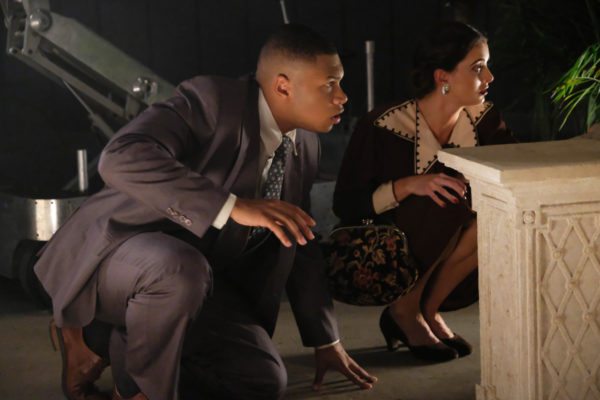 This week, the Legends of Tomorrow catch a perfect opportunity to make a commentary on the current state of American culture. However, their window quickly closes as the showrunners opt for a safe show instead of taking a stand like the Legends needed to.

The episode begins with Ray trying out a new gadget to separate the members of Firestorm — the Professor and Jax. The machine explodes and does something, but not what it was intended. When the crew finds out that a Freaky Friday situation has occurred, they dismiss the issue as if it were more shenanigan for the guys. Sarah even waves them off with an “I don’t have time for this,” type of attitude. They were off to Old Hollywood to fix a problem with history.

The body switch is what opens the “window of opportunity” for a real stand or cultural commentary. And, there are early indications that a stance will be made. Jax stays on board the ship in an old white man’s body, rocking a hilarious accent and complaining of being tired and feeling as though he were walking through mud. Great observations, right? We expected similar from the Professor walking around in the 1940s in young black man’s body. Everything inside me screams, “this is going to be good! And old white guy giving a play by play of being black during Jim Crow!”

No. That is NOT what happens.

Instead, the Professor, in Jax’s body, makes a few comments about being so young and energetic. That’s it. Nothing else happens. The rest of the show is about the Legends rescuing Helen of Troy and surviving encounters with Damien Darhk and Kuasa —separately, these two have not teamed up, thank goodness.

The first opportunity for cultural commentary thus closes without a ripple of a complaint from the show. It would have been a wonderful opportunity for white America to hear about the racist history of our country from a white man who actually got to walk in the black man’s body. He would feel the complex emotions and struggle with balancing rage with surviving the racist encounters to live another day. A black man touching a white woman as beautiful as Heddy Lamarr was a death sentence at that time, and this show had Jax practically kissing the woman!

But that wasn’t all. The second opportunity involved Lamarr and Helen of Troy and the environment of toxic masculinity that notoriously ruled Old (and let’s be real, current) Hollywood. Furthermore, the current exposure of modern-day Hollywood as being just as corrupt with sexual predators made this episode the perfect opportunity to play out a scenario in the show. The men were already falling over and fighting for Helen. It wouldn’t have been much more of a stretch to add some truth to Hollywood. (But let’s not forget an Arrow-verse producer is currently suspended for sexual harassment.)

Instead, Legends showrunners had a black man waiter and a white leading lady falling in love and getting close to one another just a few years before a black boy would get killed for allegedly whistling in at a white woman. Yep, that’s plausible. (This coming from the showrunner, Marc Guggenheim, who wants to “bring in” a black writer to write a Black Lives Matter episode for Arrow. Laughable.)

The rest of the story was pretty unremarkable. Damian Dahrk versus White Canary swordfight that ended in Darhk’s daughter (the psychic from two episodes ago) draining the life from her. Meanwhile, Kuasa reveals to Amaya that she is Mari’s sister and that Amaya made a mistake in handing down the totem. Then Kuasa is stabbed and leaks into the floor. The Darhk father/daughter pair jump to another point in time.

Jax and the Professor undid their “Freaky Friday” moment by joining into Firestorm. Now the Professor wants to tell us how he feels in Jax’s place. It’s too late, dude! Moment’s passed.

Okay, there is one part of the ending that was pretty awesome. Zari defies the orders of the rest of the Legends and takes Helen of Troy back to her time, but another location. Zari tells her that the place has no men and the women are warriors. The last thing we see is the name Themiscyra. IS WONDER WOMAN GETTING A CAMEO NEXT???

P.S. Amaya and Nate are not even close to getting together. I need to find another couple to ship. Suggestions?