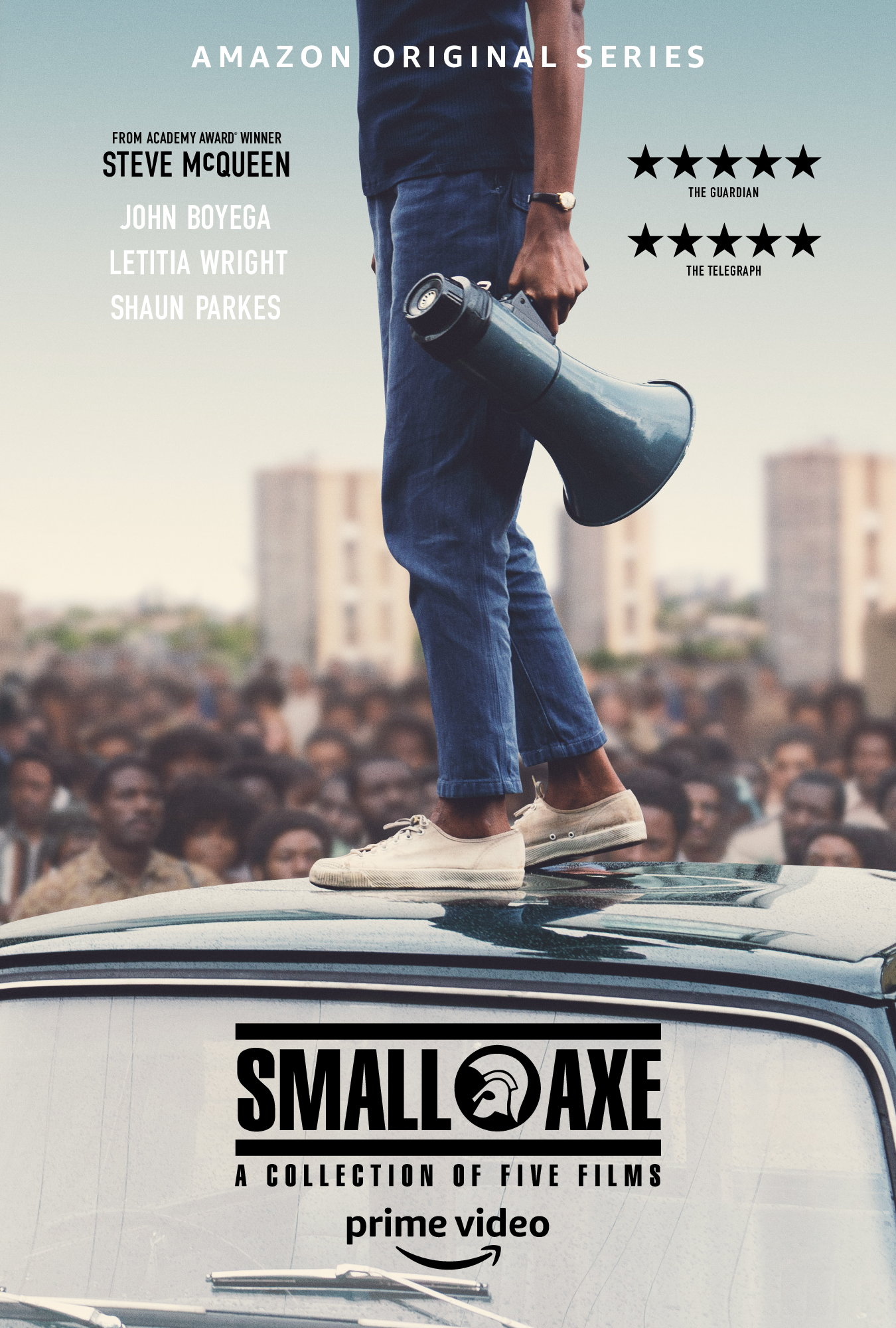 Amazon Prime Video has released the official key art and extended trailer for Small Axe, from Academy Award, BAFTA, and Golden Globe-winning filmmaker Steve McQueen (Hunger, 12 Years A Slave).  Small Axe is an anthology series comprised of five original films set from the late 1960s to the mid 1980s that tell personal stories from London’s West Indian community, whose lives have been shaped by their own force of will despite rampant racism and discrimination. The title is derived from the African proverb, “If you are the big tree, we are the small axe.”

Lovers Rock tells a fictional story of young love at a Blues party in 1980. The film is an ode to the romantic reggae genre called “Lovers Rock” and to the Black youth who found freedom and love in its sound in London house parties, when they were unwelcome in white nightclubs. Amarah-Jae St. Aubyn makes her screen debut opposite the BAFTAs 2020 Rising Star award recipient Micheal Ward (Top Boy). Shaniqua Okwok (Boys), Kedar Williams-Stirling (Sex Education), Ellis George (Dr Who), Alexander James-Blake (Top Boy), and Kadeem Ramsay (Blue Story) also star, as well as Francis Lovehall and Daniel Francis-Swaby who make their screen debuts. Lovers Rock was co-written by Courttia Newland and Steve McQueen.

Red, White and Blue tells the true story of Leroy Logan, a young forensic scientist with a yearning to do more than his solitary laboratory work. When he sees his father assaulted by two policemen, he finds himself driven to revisiting a childhood ambition to become a police officer; an ambition borne from the naïve hope of wanting to change racist attitudes from within. First, Leroy has to face the consequences of his father’s disapproval, never mind the blatant racism he finds in his new role as a despised yet exemplary Constable in the Metropolitan Police Force. John Boyega (Star Wars: The Force Awakens) and Steve Toussaint (Prince of Persia) star with talented newcomers Tyrone Huntley, Nathan Vidal and Jaden Oshenye. Red, White and Blue was co-written by Courttia Newland and Steve McQueen.

Alex Wheatle follows the true story of award-winning writer, Alex Wheatle (Sheyi Cole), from a young boy through his early adult years. Having spent his childhood in a mostly white institutional care home with no love or family, he finally finds not only a sense of community for the first time in Brixton, but his identity and ability to grow his passion for music and DJing. When he is thrown in prison during the Brixton Uprising of 1981, he confronts his past and sees a path to healing. Sheyi Cole stars opposite Jonathan Jules. Alex Wheatle was co-written by Alastair Siddons and Steve McQueen.

Education is the coming of age story of 12-year-old Kingsley, a boy with a fascination for astronauts and rockets. When Kingsley is called to the Headmaster’s office for disruptive behaviour in class, he is shocked to discover his transfer to a school for those with “special needs.” Distracted by working two jobs, his parents are unaware of what was an unofficial segregation policy at play, preventing many Black children from having the education they deserve until a group of West Indian women take matters into their own hands. Newcomer Kenyah Sandy stars opposite Sharlene Whyte (We Hunt Together, Casualty), Daniel Francis (Once Upon A Time, Homefront), Tamara Lawrance (The Long Song, Kindred) and Josette Simon (Wonder Woman, Silent Witness, Law & Order: UK). Education was co-written by Alastair Siddons and Steve McQueen.