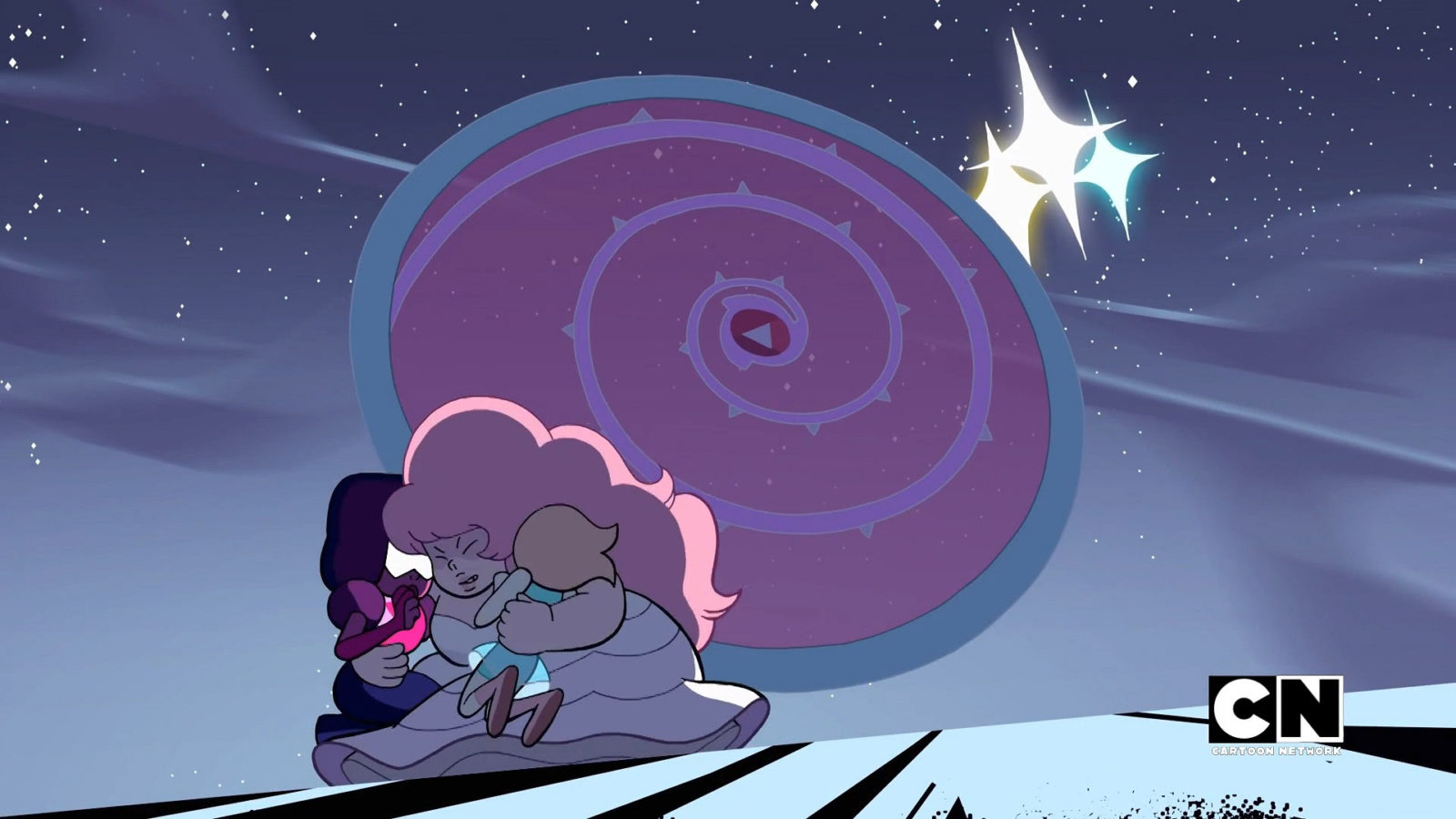 Aaaaaaand we’re back! Steven Universe decided to gift us with another glorious Steven-Bomb of episodes, and the first one on that list is a doozy because it features Garnet (yay!) Rose Quartz (YAY!) …and Lars (boo).

The episode starts off with Lars and his Off-Color gem crew stuck in space, with engines in desperate need of repair. Steven pops up from the portal in Lars’ head with a “party sub!” to celebrate the previous episode’s Off-Color defeat of Emerald and rescuing of Stevonnie, but finds Lars is in no mood for celebration (when is he ever though?), especially when the ship loses power altogether.

Since they literally aren’t going anywhere, Steven decides now’s as good a time as any to introduce everyone to Garnet, so he pulls her through Lars’ portal. She is giddy at the sight of the Off-Colors, giving each individual compliments and telling them how much she wants to hear their stories—which ends up making them uncomfortable, as they think she’s making fun of them. They’re not used to being embraced on sight, or being called beautiful.

Garnet sadly remarks that that’s how she felt about herself before meeting Rose Quartz. The Off-Gems reaction to that statement (“Rose Quartz?! The Anti-Gem?!”) makes Garnet and Steven realize that the Diamonds, to save face about their defeat on Earth, created a story about Rose being a demonic villain who tried to destroy all Gems but was heroically beaten thousands of years ago. To prove how wrong this was, Garnet sits them all down and tells them the story of Earth’s revolution, of how Rose came to fight the Diamond Authority.

It’s a story that Steven pays special attention to because he doesn’t know a lot about his own mother. None of us do, even after five seasons. I’ve always wondered, what exactly happened to Rose to make her turn against her own people and start a war no one else had considered fighting?

Turns out what made Rose so special were her observational skills. Unlike all the other soldiers mindlessly working away, she started paying attention to the Earth itself and the life that existed on it—including humans, which she began to have romantic feelings toward. Broadening her horizons this way led her to begin telling all the Gems around her what she would learn—which Pink Diamond (the diamond who owned Earth) began to notice. From there it was only a matter of time before Rose Quartz officially broke free of her shackles and started openly rebelling against the Diamond Authority. And we know the rest from there—she joins forces with Pearl, Garnet, and Bismuth, creates the Crystal Gems, shatters Pink Diamond, and survives when the rest of the Diamonds sends the Corruption light down on Earth and corrupts the rest of the Gems.

It’s not a happy ending (the Corruption is an awful, awful thing) and the Off-Color Gems are disheartened by hearing about what happened to all those other Gems. But Garnet reminds them of how far they’ve come—that there are free Gems that survived the wrath of the Diamonds, that the Off-Colors can now be called free Gems themselves. They are proof that the Diamonds are not unbeatable.

This rallies Lars and the Off-Colors to find ways to repair their ship. But Steven brings up something interesting—with his having that vision of Pink Diamond in the previous episode, does this mean there’s a chance she might still be alive? We already know there’s proof Rose Quartz couldn’t have shattered Pink Diamond, at least the way everyone thinks she did. Is she still alive, in hiding somewhere? Ya girl needs answers!!!

Garnet: “You must be Rhodonite! A Ruby and a Pearl…that must have been a story! I want all the details!”