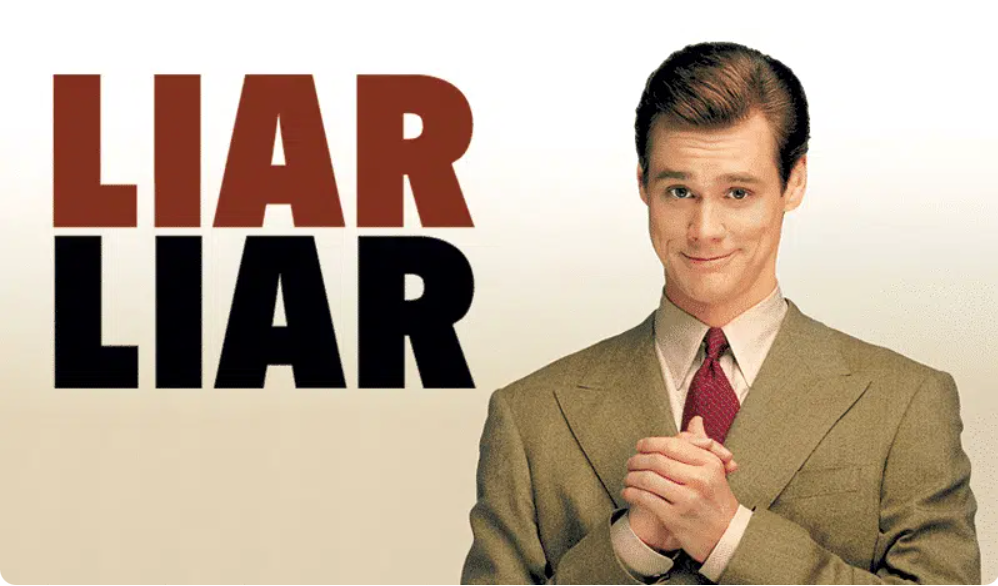 Say what you will about his ever–evolving takes on the Rorschach test that was the Will Smith Slap Incident. Tell me, and I will likely agree, that his off-stage personality tends to do cringe-worthy things and have cringe-worthy takes.

These statements can be true. However, they can not negate the fact that Carrey, especially in 1997’s Liar Liar, brings an inimitable comedic styling that will be mourned once it is gone — particularly if his recent statements about quitting acting are genuine, rather than a PR stunt.

In fact, you don’t need to look any further than Liar Liar to see that Carrey’s improvisational skills and manic comic persona are not something any old actor can copy.

Take, for instance, the scene where Carrey’s character Fletcher Reede is convincing unfaithful housewife Samantha Cole (Jennifer Tilly) that, despite having signed a prenuptial agreement, and despite arguably having caused the divorce through her infidelity, she is, in fact, the real victim. It’s hard to say where the script ends and Carrey begins.

Did screenwriters Paul Guay and Stephen Mazur write that Fletcher invokes Ike and Tina Turner even though Cole’s situation is nothing like theirs? Maybe. It’s possible that Carrey never went off script once, and read every line he was given. But it’s what he does with them that’s the interesting part.

Carrey, like Fletcher, goes into a long tirade about women’s rights and the loneliness of housewives all to convince a client to fight a million-dollar settlement that is, legally at least, a lot more than what she’s entitled to.

Look at how actress Amanda Donohoe almost seems to break character laughing. Donohoe’s character Miranda isn’t the “smiling to herself and laughing” type. She’s a calculating, high-priced attorney who sleeps with subordinate employees using promotion as leverage. Yet, here she is trying to hold in a laugh. Jim Carrey, then, is funny enough to make actors nearly ruin a shot.

It’s not just Carrey as a comedic performer that makes this movie so enjoyable, it’s him as a very flawed, but very loving, father.

Scenes of Fletcher interacting with Max (Justin Cooper) do feel true to life. “The Claw” feels like something that’d actually be a part of a father and his young son’s inside jokes. Max does feel like a real child who admires his father but has been disappointed enough to no longer idolize him. Check out the scene when he makes his birthday wish. While I personally wish they hadn’t put in that voice-over (we could’ve put two and two together), Justin Cooper is heartbreakingly believable as a child who may grow to resent his father if things keep going the way they are. We buy that he isn’t there yet, though, when we see how much fun he has with Fletcher.

It’s no secret that Jim Carrey can do wonderful dramatic work as well. Take Eternal Sunshine of the Spotless Mind. Carrey eschews most of his antics for a muted performance as a man who is desperate to retain memories of his lover, knowing, however belatedly, that even painful moments help us learn and grow.

Although that film was released in 2004, we as an audience see a nascent version of the actor Carrey would become. Under the elastic facial expressions, self-produced sound effects, and over-the-top body movements is a man who wants to be better. Carrey, like Fletcher, lets the realization that he is a bad father sit with himself and the audience. No amount of comedic frustration with having, to tell the truth, can make this fact any less sobering.

Don’t get it twisted, though, this movie definitely has its flaws.

For one, there’s the score by composer John Debney. I’m not sure what notes the studio gave Debney, but if the final product is any indication, some executive simply gave him the note “more saccharine,” and, boy, did he run with it.

Besides that, there’s the paint-by-numbers quality of the script.

I laude Carrey so much because, without him, this film would have gone the way of Ernest Goes to Africa, The Man Who Knew Too Little, and Hey! That’s My Girlfriend!, 1997 comedies so forgettable that I actually made up one of these titles and it’s not even worth it to google which one.

The script for Liar Liar is so uninspired that it ends with two worn-out clichés: the last-minute dash through the airport, and the divorced parents getting back together.

Think of how interesting the film would’ve been to see Fletcher learn from his mistakes and focus on being a better father, but use that knowledge to focus on repairing his relationship with his son rather than on getting back with his ex. It would send the message, like Eternal Sunshine, that, while we can’t — and shouldn’t — erase the past, we can use knowledge of our past actions to prepare for a better future.

Instead, we get the moral that, if you say “sorry” enough, you’ll get back your ex no matter how many times you’ve broken their heart.

And this leads me to my final problem with the film. Namely, I can’t tell who it’s for.

In another world, Liar Liar is rated R, and adults can watch an uncensored Carrey and crew talk the way we know high-priced Los Angeles lawyers do. The film we do get is rated PG-13, and this is likely for maximal box office performance.

Max is a five-year-old, but can we bring five-year-olds to watch it? If you need to ponder this question for long, please remember that there is a scene where Fletcher’s assistant Greta (Anne Haney) bails him out of jail. Before posting bail, she jokes, “Am I too late? Have you been sexually molested yet? Because I could circle the block.”

Not exactly comedy for the Sesame Street crowd.

As Carrey’s career perhaps draws to a close, it is important to remember that for decades now, he has consistently provided pathos and humor in an acting style all his own. Whether or not he should keep his mouth shut when he’s not on set is up for debate, but the fact that he’s hilarious is not.

Do yourself a favor and rewatch this film. If it doesn’t make you laugh, then we can do a viewing party for Ernest in Africa instead.

Liar Liar can be rented via Amazon Prime or viewed on AMC+.