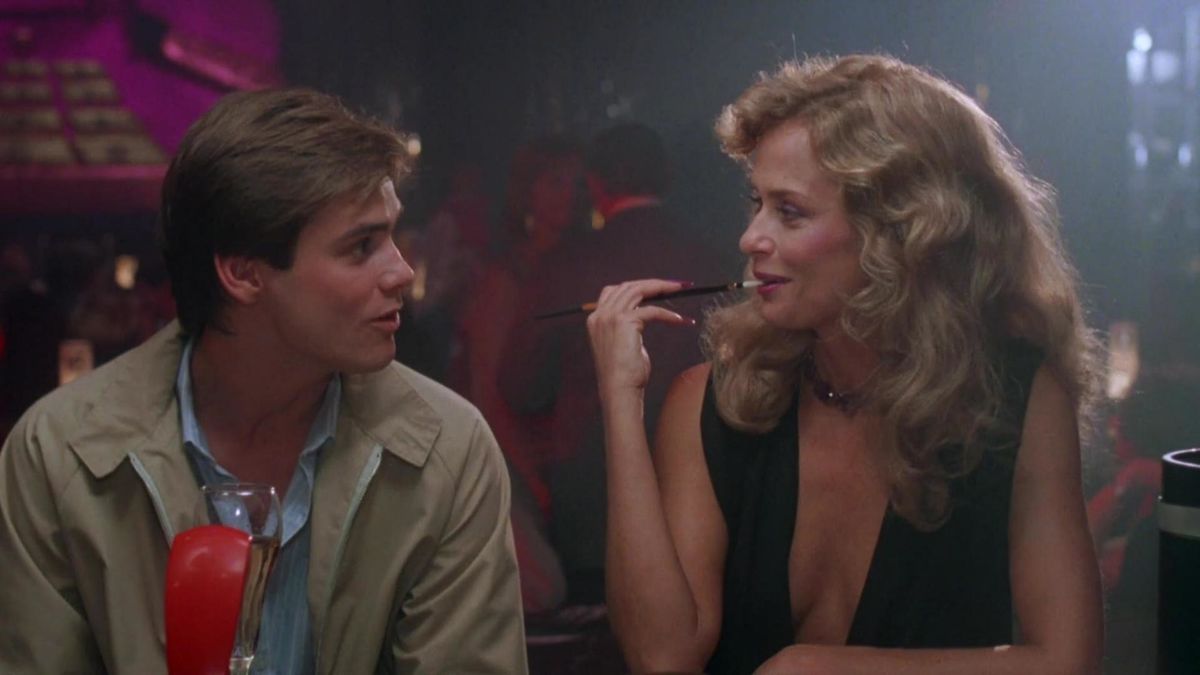 Once Bitten is a tragically underrated gem from 1985 starring a young (and very cute) Jim Carrey. A lot of the humor is dated, of course, especially with its views on sex and virginity. There were plenty of raunchy teen comedies revolving around sex in the 1980s, but this one just happens to have a female vampire.

Countess (Lauren Hutton), a centuries old vampire, must drink from a male virgin three times before Halloween to retain her youthful looks. It’s only 10 days away, and she’s antsy. Her assistant/butler/chauffeur Sebastian (Cleavon Little) assures her everything will be alright. The Countess houses a group of younger vampires she’s turned over the centuries, and they’re tasked with hunting down a virgin. This proves difficult since there are apparently few virgins in 1980s Los Angeles.

In a montage set to the movie’s title song performed by 3 Speed, the guys drive around the shiny and glam city in Mark’s ice cream truck. Hollywood is made to look like a fantasy world with bright lights and bikini models on the sidewalk. It almost looks like Las Vegas. A blond woman dressed in a gold jumpsuit walks down the street with an actual lion.

The boys go to an interesting bar where there are phones on the tables to call other tables. Mark wants to leave, but after a while, the table gets a call from a beautiful woman at the bar asking for Mark. He nervously talks to her and tries (and fails) not to stare at her breasts. After a disgruntled husband pulls a gun out on his cheating wife, the bar patrons scatter. The Countess grabs Mark and convinces him to go home with her, not that he needed much convincing.

Countess seduces a fumbling Mark and gets her first drink. He passes out and thinks they had sex, even though he remembers nothing. I’m still not sure why she wouldn’t just keep him there for the next 10 days to get her next two drinks in before the “deadline.” Probably because chasing him around LA is too much fun to pass up.

Despite his boyish charm, Mark Kendall is actually a terrible boyfriend. The first time we see him, he pressures his longtime girlfriend to have sex when she’s not ready. Not to mention they’re in a crowded parking lot in the ice cream truck that he drives. He goes out to sleep with a stranger just to get it over with, and when Robin calls him out on it, it somehow becomes her fault. But don’t worry, she takes him back because it’s the ’80s and he’s just being a guy. He tells her, “I made a stupid mistake. I’m sorry. I’m a teenager. I’m supposed to make stupid mistakes. I wouldn’t try to hurt ya, you know that.” Plus, he was drunk, so all is forgiven.

Mark goes through changes like suddenly being sensitive to sunlight and developing a taste for black clothes (among other things). Carrey as a vampire is something everyone should want to see. In an over-the-top ‘80s setting, he stands out even more, as does the Countess with her killer all-black wardrobe. She adds in pops of color like fuchsia lipstick. Her mansion is all black and white, marble, and filled with pure ’80s decor. I still love when she opens her coffin to reveal a pink satin interior.

Sebastian was always my favorite, though. The opening of the film shows him sort of gliding around the house, straightening paintings and sculptures as he prepares and delivers the Countess’ breakfast. He serves her a glass of blood on a tray next to a single black rose. He sort of leans into Hollywood’s gay stereotype here and there, but he’s not made to be a flamboyant caricature. I appreciate his bitchy comments and constant disapproval of Mark.

Once Bitten is Jim Carrey’s first leading role in a feature film. I try to imagine seeing this film before I knew Carrey’s other work. As a fan, I already know he’s hilarious. But if I were watching him for the first time, I think I’d be even more impressed. The movie’s dance scene is perfectly ridiculous and shows off Carrey’s affinity for physical comedy. I’d also like to point out that not a single person at this school looks like a teenager.

I was around five or six when I first saw Once Bitten. All the sex talk went over my head for the most part. I was just enamored with Jim Carrey, meaning this movie was likely shown to me because I’d seen all his other stuff (including In Living Color, which I was obsessed with). In a time when Disney on Ice was still a huge deal, I asked my mother, “Can we go see Jim Carrey on ice?” Sadly, that wasn’t a thing, but I’m sure he would’ve done it if asked.

As a ‘90s kid, this movie embodied everything I thought the ‘80s were and more — neon signs, pastel colors, guitar riffs, unusual (and sometimes fabulous) fashion. With all the catchy songs, it feels like watching a music video. Good luck trying to get Maria Vidal’s “Just One Kiss” and “Hands Off” out of your head.

Once Bitten is streaming on Amazon Prime Video and for free on YouTube.

‘Liar Liar’: Only Liars Will Say It’s Not Funny