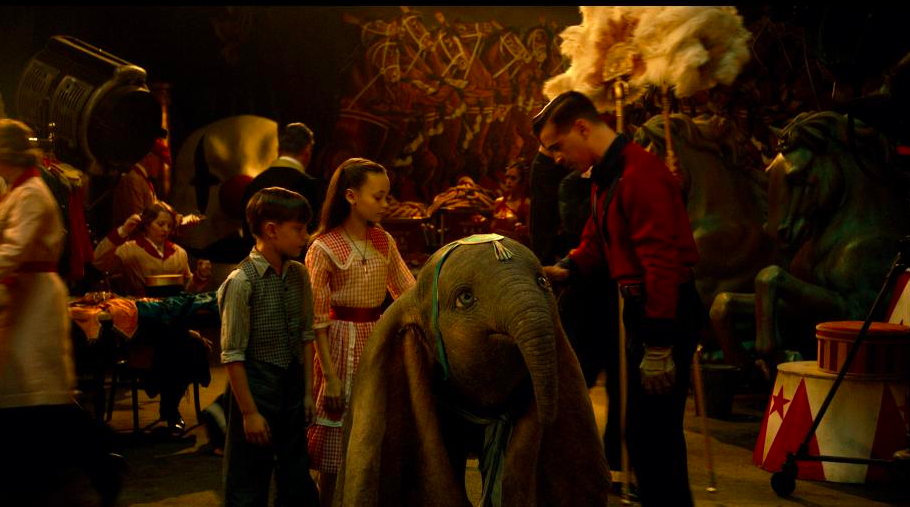 Dumbo has always been and forever will be a very sad and dejected Disney movie.

As a kid, it never received repeat viewings like The Lion King, Aladdin, and the Goofy Movie franchise. It was extremely depressing and showcased a side of Disney I was never really interested in. Fast forward years later and my grown butt is in the theater watching the live-action version. Let me tell you, animated or not, it’s still depressing.

The Story of Dumbo

Dumbo follows the story of a baby elephant born with crazy oversized ears. After being laughed at and ridiculed for his freak-show appearance, Dumbo is separated from his mother. With Dumbo’s mom gone, a struggling group of circus performers watch over him and teach him to use his ears to fly. Dumbo hopes that if he can fly, he can find a way back to his mom. It becomes a journey to save Dumbo and save the circus. 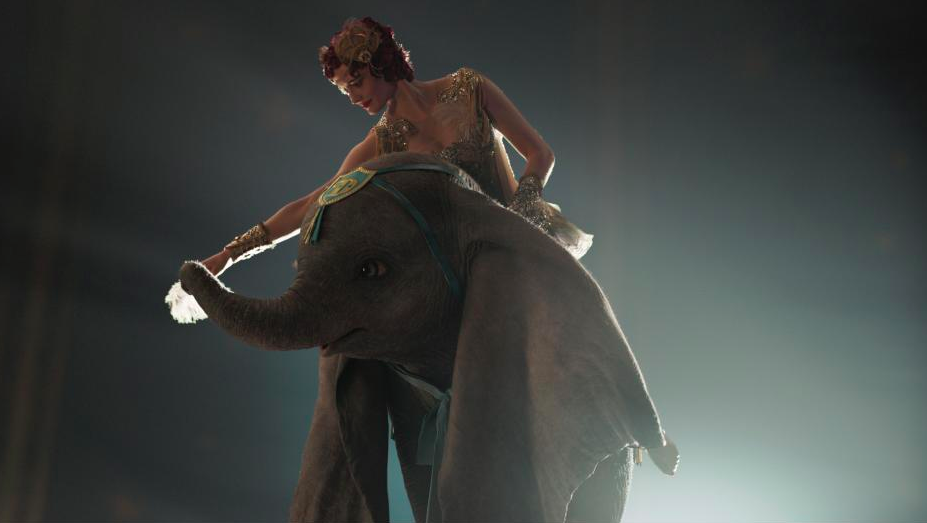 Directing this feature film is Tim Burton. Burton has always been known for his dark and twisted versions of Disney movies. The Nightmare Before Christmas, Alice in Wonderland, and Frankenweenie are all Disney and Burton collaborations that have that dark and nightmarish edge to them. Who thought it would be a good idea to give an already disenchanting story to a filmmaker with dark tendencies? The world may never know. At one point during the film, I lost my tunnel vision and immediately snapped back to reality thinking, ‘this is a really dismal film’. Everyone on screen is just in a bad way and not getting any better. The sobbing and sniffling representing tears being shed by the audience added to the tone of the film.

Burton is notorious for using the same people in his movies that he’s worked with before. Dumbo is no exception. Burton worked with Danny Devito and Michael Keaton on Batman Returns and Michael Keaton on Beetlejuice (which I hear they are making a sequel to). He also worked with Eva Green on Miss Peregrine’s Home for Peculiar Children and Dark Shadows. I was sure we were going to see Johnny Depp or Helena Bonham Carter at some point. No such luck. In all honesty, it’s Devito and Keaton that really make this film enjoyable. 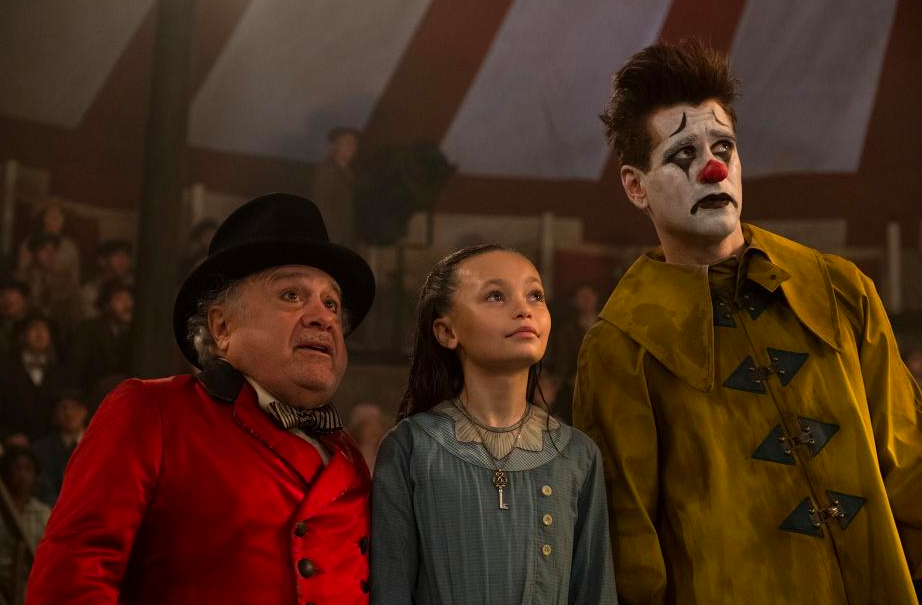 Danny Devito is great in these satirical, comedic roles. In Dumbo he plays Max Medici, the owner of a struggling Circus Troupe. He is a good guy. He’s proud, hopeful, and genuinely cares about the people around him. It was a wise choice to put Danny Devito in this role because he added a much-needed dose of comic relief during a very depressing first and second act. Michael Keaton seems to be channeling his inner Beetlejuice, which I am not mad about. It’s like if Beetlejuice was an overly ambitious, sinister, Walt Disney. Keaton plays V.A. Vandevere who is a smooth talking entrepreneur that sets his sights on Dumbo as a money maker for his own act. Vandevere owns a theme park called Dreamland, which is very reminiscent of Tomorrowland at Disneyland. Keaton brings some comedy and over the top theatrics that is done well enough to see there is something missing from this guy. Love perhaps.

The film is written by Ehren Kruger who I know best for writing horror films like Scream 3, The Ring, and The Skeleton Key. So, it was very interesting to see his take on Dumbo being exported into the human world. The story doesn’t disappoint, it’s just a little heavier for a Disney film that I’m used to. This is coming from someone who cried when Mufasa died in front of Simba or when Bambi’s mother was shot (And people wonder why Disney and Horror are my favorites). While the story is predictable, it still excites. There are still little surprises that will make you laugh and smile. Gone are the racist crows that sing, “When I See An Elephant Fly”. Although, the lyrics are incorporated nicely into the film. As is the Oscar-nominated song, “Baby Mine” from the original. 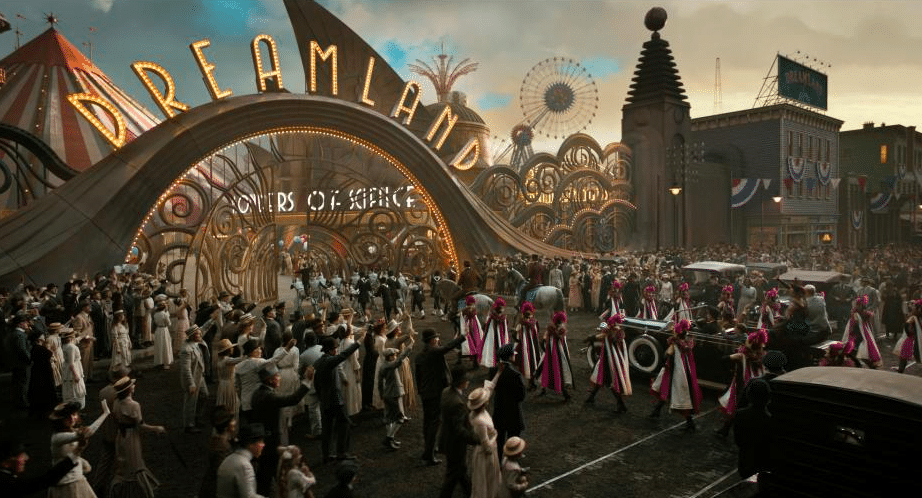 While this is a live-action film, Dumbo and a slew of other animals are CG. To be honest, it’s really hit or miss with the animation. Dumbo takes command of the screen whenever he appears. He’s cute and personification works in his favor. Dumbo’s mom, Mrs. Jumbo, looks great on screen as well. Her CG qualities weren’t even noticeable until she had a fit over her baby. There is, however, an unnecessary amount of CG used for the long shots of trains and landscape. At one point it looked like a video game instead of a movie. The people were running around like Lara Croft when you don’t know which tomb to go explore.

So, when you go see Dumbo, and you know you are a crier, bring some tissues. Overall, Dumbo is an entertaining film with some great performances. For those that grew up with the original animated version, it will give you a great sense of nostalgia for the story you grew up a little bit damaged from.

Dumbo is in theaters March 29.