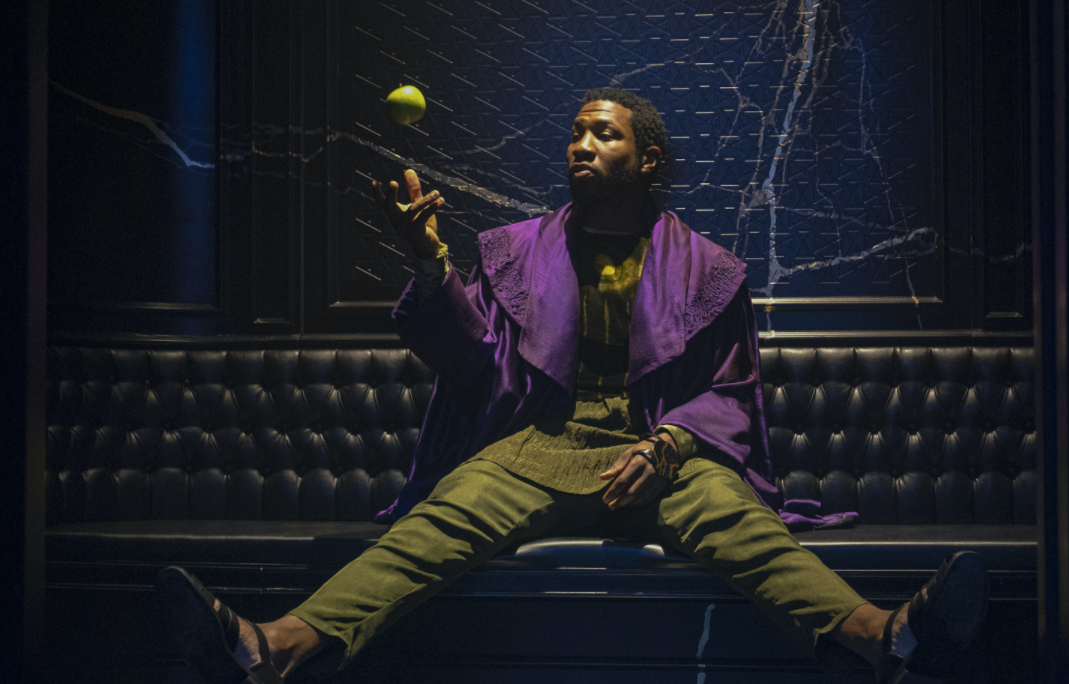 Loki and Sylvie walk towards the front door of a castle in the middle of space (???). Sylvie takes a minute to gather the courage to kick in the front door. However, before she can, the door opens. Seconds after they walk into a corridor, Ms. Minutes shows up to welcome them to the Citadel at the End of Time and informs them that He Who Remains (Jonathon Majors) is impressed with how far they have come and wants to make a deal with them: they can go back to the main timeline and the TVA can continue its work. Ms. Minutes offers the throne of Asgard, killing Thanos, and even winning the battle in New York to Loki and a lifetime of happy memories for Sylvie. Both of them are on the same timeline, together. The two don’t believe it and state they write their own destinies.

Ms. Minutes visits Ravonna to give her information that He Who Remains thinks would be useful to her.

Loki and Sylvie are surprised by the appearance of He Who Remains, who is of flesh and blood. That doesn’t stop them from putting down their swords. When Sylvie attempts to slash him, he disappears and surprises them by being on the other side of the elevator doors.

Mobius visits Ravonna in her office. He informs her that he isn’t going to prune her and he has other plans.

Fremont, Ohio 2018, Hunter B-15 is chased around a school. She exposes Hunter U-92 to a Ravonna variant and says they have a lot to talk about.

He Who Remains taunts the two Lokis before informing them that they can’t kill him because he already knows what is about to happen. He pulls out a script of their most recent actions for them to see. The two don’t believe him and Sylvie points out that He Who Remains has a Tempad. He Who Remains points out that he has it set up so he can move before she makes an attempt to kill because he knows what they will do before they do it. He lets them know he has seen everything and that he has paved the road for them to arrive there. He also has a script on how everything will happen.

Sylvie asks what is the point of it all. He Who Remains tells her that they need to be changed by the journey. Loki points out that it is a manipulation. He Who Remains asks Sylvie if she thinks she can trust Loki or anyone at all.

Mobius thinks everyone should know the TVA is all a big lie. However, Ravonna is adamant that there has to be a reason for the creator to make everything and free will is only for the one who created the TVA. Mobius states that Ravonna betrayed him, but she hits back that he was the one who betrayed her for a couple of Lokis. She pulls out a Tempad to leave but Mobius pulls out a pruner to end her. Ravonna shows him that she is capable of handling herself then leaves him.

He Who Remains informs the Lokis that without him and the TVA, everything burns. Loki asks him what he’s afraid of. He Who Remains says he’s afraid of himself. Sylvie asks who he is. He Who Remains gives the two a detailed story of how a 31st-century version of himself found out about stacked universes and variants of people. At first, there was peace but some versions of his variant self wanted to conquer the other universes, all-out war erupted and the end was near. The first variant encountered Alioth, harnessed the beast’s power, and ended the multiverse war, creating the TimeKeepers, Sacred Timeline, and the TVA. He points out that if he’s the devil, his variants are even worse. He’s gone through every scenario, and this is the best way.

Sylvie points out he could be lying. Loki asks if he is just going to continue to prune innocent lives. He Who Remains gives them two options: kill him and deal with infinite devils or Sylvie and Loki run things. Loki doesn’t believe him and asks why he would give up the power. He Who Remains states that he is tired. He’s gone through all the scenarios, looking for a replacement, and found the two of them as the best people. So, they can either kill him, thus creating a multiversal war, or they take over the TVA as its benevolent rulers and explain to people why they do the things that they do.

When Sylvie points out that He Who Remains treated people’s lives like a game, He Who Remains snaps back calling her a hypocrite and murderer. He states that they are all villains here. Now, they can continue what they do but with a purpose.

A far-off noise seems to disrupt his thoughts and He Who Remains states that they have crossed a threshold. He Who Remains admits that he lied. He knew everything up to a certain point, which just ended. Now he doesn’t know what will happen. The timeline seems to start branching out. Loki asks if this is what happens at the end of time, and they decide He Who Remains’s fate. He Who Remains vehemently states yes and points out that another infinite amount of him could appear upon his death or the Lokis take over his work.

Sylvie thinks that it is all a lie but He Who Remains says that it is truth. After a couple of moments. Sylvie lunges at He Who Remains but is stopped by Loki. The two spar for a second then talk about the possibility of what could happen if they kill off He Who Remains. Who would end up on the throne? Sylvie thinks that Loki wants the throne but Loki, hurt by the accusation, tells her that he just wants them to think things over before making this decision and after all they went through, he can honestly say that he doesn’t want the throne. Sylvie questions why they can’t see eye to eye about this. Loki states that she can’t trust and he can’t be trusted. A Loki predicament.

Loki asks her to wait but the two end up fighting. Loki thinks that risk is too great but doesn’t take the throne when Sylvie yells for him to take it. Just before Sylvie is about to lunge at He Who Remains (who is watching with great interest), Loki appears at the blade, begging her to stop, and states that he has been where she is and just wants her to be okay. Sylvie drops her sword and the two share a tearful, passionate kiss. When they pull apart, Sylvie states she’s not him and pushes Loki into a dimension portal back to the TVA.

Sylvie turns to He Who Remains and plunges a sword into him. He laughs and says, “See you soon.” Just outside his window, the timeline branches out into millions of different timelines.

Mobius, HB-15, and the rest of the TVA watch the timeline branch out on the screen, stating there is no going back now. Loki sits and lets a few tears drop then searches the TVA for Mobius. He finds Mobius and HB-15 as they talk about the timeline branches and what “he” expects them to do about it. Loki informs them that they can’t fix the timeline because the creator, He Who Remains, has been killed, they need to prepare for war, etc. Mobius, however, doesn’t recognize Loki at all. Loki, astonished, sees a statue of He Who Remains in place of the previous TimeKeepers.

DEAR GOD WHAT IS ABOUT TO HAPPEN?!?!  Now, I’m not sure what I was preparing to see in this castle but I found Jonathon Major’s portrayal of He Who Remains quite enjoyable. He came off as a man with infinite knowledge and power that needed a moment of enjoyment. He Who Remains is a variant version of Kang the Conqueror. He gave Loki and Sylvie the best warning possible about what would happen if he is killed; worse versions of himself will appear. Kang the Conqueror is the ultimate villain variant, and he is set to appear in Antman and the Wasp: Quantumania. The current theory is that Sylvie sent Loki into a different timeline and that’s why Mobius didn’t recognize him. Maybe Kang already knows this…

Loki was the calmest of the two when encountering this new information, and I have to give it up to his full character development in a short amount of episodes. He took in all of this information and thought it would be best for them all if they didn’t kill off He Who Remains. He didn’t want the throne; he wanted Sylvie and himself to be safe. Sylvie only focused on killing the man behind everything despite all this information. Her actions hurt the one she loved and resulted in a multiverse war. Now we absolutely know what is the reason for the upcoming Dr. Strange and Spiderman movies. Let’s not forget that Wanda heard her kids calling for her at the mid-credit scene in WandaVision.

I do wonder where Ravonna ran off to and why He Who Remains gave her information “to help her” if he planned to leave his position or be killed. It’s a shame that HB-15 and Mobius are stuck in the positions that they were fighting so hard to shake off. I guess they are stuck there until the end of time. Always.

This show was certainly a fun and interesting trip to take, setting up the MCU multi-universe in the most fun way possible. We certainly have a fun journey to go on. Season 2 will possibly be affected by the upcoming MCU movies. Pack lightly and be prepared for screams, thrills, and tears. They’re coming for us.