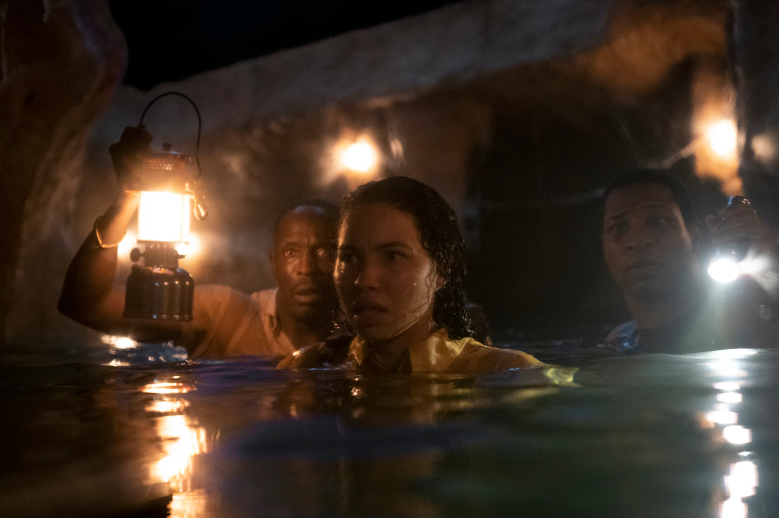 The brilliance of Lovecraft Country is the way creator and executive producer Misha Green works in historical Easter eggs. It’s a skillset she honed on the now defunct series Underground – who knew drapetomania was a thing? – and thrillingly continues to use.

Best of all, each episode is there to not only entertain but edify.

For instance, in the pilot titled “Sundown,” Green and her writers taught us about racism in New England Sundown towns. They also showed us how the movie Green Book should’ve paid respects to the guide and other booklets that helped Black travelers safely navigate road trips. There was also the rarely discussed sins of sci-fi author H.P. Lovecraft, who lived in New England and was a raging racist and white supremacist. Lovecraft Country spawned overdue conversations about Lovecraft’s bigoted writings and how he referenced Black people and other non-WASPs in hateful and disturbing ways.

Episode two, “Whitey’s On the Moon,” utilized the brilliant Gil Scott-Heron poem of the same name and dropped knowledge on the Prince Hall Freemasonry. We also learned that Atticus (Jonathan Majors) might actually be Uncle George’s (Courtney B. Vance) son. But that’s for another post and time. It is also mentioned during George’s vision of Dora (Erica Tazel) that he, Dora and Montrose (Michael K. Williams) grew up in Tulsa and survived the massacre.

The third installment “Holy Ghost,” meanwhile, gave us a lesson on everything from Chicago’s historically segregated slum housing and restrictive covenants to Emmett Till (played by Rhyan Hill) shortly before his murder. The episode even managed to pay tribute to Anarcha, Lucy and Betsey, three of the enslaved Black women James Marion Sims, the father of modern gynecology, abused to conduct his crude and inhumane experiments. This episode of Lovecraft Country also gave Jurnee Smollett the material she deserves to truly shine. Letitia’s basement exorcism set to Shirley Caesars’ “Satan, We’re Gonna Tear Your Kingdom Down”?! Give this woman all the awards.

Which leads us to the fourth and latest episode, “A History of Violence,” which aired Sunday night. Tic, Letitia and Montrose head out on a road trip to find the lost pages from the Book of Names (aka the Book of the Dead) in hopes of shaking Tic’s ever-present and freakishly powerful white cousin, Christina (Abbey Lee). But because they want to use Old Woody, the trio has to make the trip with Hippolyta (Aunjanue Ellis), Diana (Jada Harris) and even Tree (Deron J. Powell). Despite the unwanted company, Tic and the gang find the vault entrance at a museum in Boston and plot a break-in straight out of The Goonies and Raiders of the Lost Arc with coded puzzles and all.

The end result verges on the cheesy but there are some gems among the goo. Hipplyta’s obsession with Hiram Winthrop’s orrery is explained when we find out she is an astronomy nerd hamstrung by the racism of her youth and her present. But Diana isn’t having it and tells everyone within earshot that her mom named a comet. Diana’s boldness is a perfect example of how kids her age were the future of the Civil Rights movement. It’s also a nod to W.E.B. Du Bois’ The Comet, an underrated 1920’s science fiction allegory for Adam and Eve. Du Bois’ photo is also shown in the library.

Meanwhile, poor Ruby (Wunmi Mosaku) finds out the hard way that she should’ve applied at Marshall Field’s sooner when she encounters a Black woman who applied and got the gig on a whim. Sadly, the historical accuracy of this is all too real and a large number of national department stores didn’t integrate their staffs and start hiring Black saleswomen until the late 1950s and early 1960s. Depressed by her sister’s past antics and her lack of career prospects, Ruby drowns her sorrows at Denmark Vesey’s bar. It’s there that Ruby and William (Jordan Patrick Smith) meet and embark on an unexpected and mutually beneficial relationship that will blow minds in episode five. But for reals, how did William’s creepy ass tattoos and blood sucking not give Ruby pause. How drunk was she?

Less mind-blowing is the way “History of Violence” handled Montrose’s obvious homosexuality with Tree’s messy gossip and his interactions with the security guard as a possible lover. Of course the 1950s weren’t the most gay friendly times, especially because homosexuality was considered a mental illness back then. But it would’ve been nice if Tic was more open minded. Then again, that’s why Leti had to curse Tic out for thinking he’s the center of the universe. Sure, he’s the one with Titus’ magical blood and powers but he’s still a dude who needs to respect and appreciate the people around him.

Besides, now that Montrose has brutally murdered Yahima (Monique Candelaria), the one person who could’ve helped Tic and Leti translate the lost pages, your boy is going to need Leti’s assistance more than ever. Speaking of Yahima, her reanimation was creepy and lowkey low budget but learning that she was a hermaphrodite was fascinating. The curse of her screaming? Not so much. Equally fascinating is knowing that Tic speaks Arawak, a language and a people (they were also called Lokono and Arhuaco) worthy of a Google search. So is the “Black” graffiti shown in front of Leti’s house.

And then there’s Hippolyta. She doesn’t have Google but she’s searching for answers and may have a little magic and time traveling abilities of her own. Maybe Diana does too. That’s going to be fun to explore in the weeks to come as well.