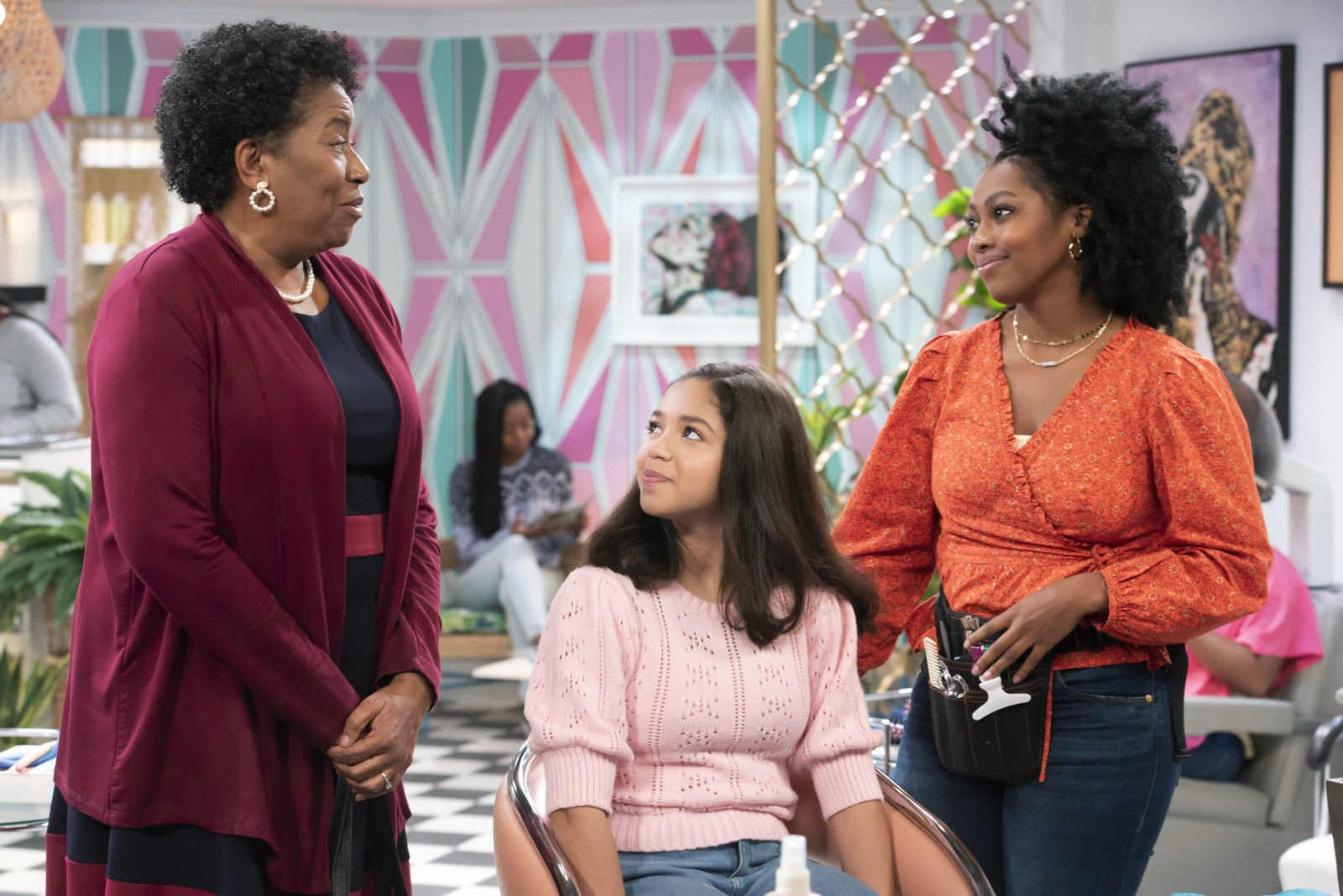 I was born in the late ‘70s. When I was a young child, there were rarely characters that looked like me on television. I had The Cosby Show and maybe one or two other shows in which I could see my reflection. While those characters dealt with many issues affecting Black lives, I don’t remember an episode that was dedicated to the challenges of dealing with Black hair. I went through the singe of the pressing comb, the burn of the relaxer, and the rod set of the Jheri curl without the aid of television characters and YouTube tutorials.

Thankfully, times are changing and my nieces and goddaughters won’t have that same experience. One show that has decided to take on this topic for their young audience is Disney’s Sydney to the Max with an episode titled, “The Hair Switch Project.” Sydney to the Max, which is now in its third season, is centered around Sydney’s (Ruth Righi) coming-of-age experiences. She’s a biracial girl whose Black mother, Alisha, has died and she’s being raised by her white father and grandmother. This episode was written in a dual timeline format, in which the audience learns about Sydney and Alisha’s experiences with Black hair.

I recently had a Zoom chat with series staff writer, Kourtney Richard, who penned the script, series star, Ruth Righi, and Carlease Burke, who guest stars as Sydney’s grandma Maya. It was all kinds of Black Girl Magic on the call as we discussed the inspiration behind the episode, the challenges of Black hair in Hollywood, and hopes for the future.

Kourtney Richard, what inspired you to write the episode?

Sydney is bi-racial, and we wanted to tap more into her Black heritage. I felt a great way to do that would be through hair. Sydney is confused about the texture of her hair, and she’s wondering why she’s always worn her hair straight. We felt like that alone could be a great way to start this discussion about Black hair. I found myself having to educate so many people about it, which I’m so thankful for that opportunity because some people don’t know. With this episode, I think that was a very smart way to have a discussion about our Black identity. We wanted to tell the story from two different perspectives. The biracial girl perspective, but also a Black girl’s perspective in the 90s. The two stories are so different, but they address the same things. It’s really just about celebrating our hair. Black hair.

Did you have to convince the network this was a topic that needed to be touched on?

Disney was so supportive. They want to tell more stories like this. There was not one time they questioned anything, and they wanted the story to be told from an authentic perspective. I felt like Disney really wanted to back it all the way, so it was a seamless process.

How did you delve into the nuances of Black hair, especially considering the character is biracial, which comes with its own set of difficulties?

Instead of making this a linear story about Sydney’s hair journey and exploring her Black side, we wanted to also educate people about all hair types. My hair type is different from Sydney’s. For me it was about creating these two stories that relate to various Black people. From my experience, being from down south in Texas, I probably could relate more to Alisha’s story than Sydney’s. Every six to eight weeks, I was in that chair getting a perm. My mom was taught that from her mom; it was a generational thing, right? I didn’t understand why I had to go through so much pain to conform to the world around me when they didn’t accept me anyway, even with my straight hair. It wasn’t until I reached around Sydney’s and Alisha’s age that I stood up for myself. I asked my mom if I could start wearing my hair natural, and she was like, “No.” It wasn’t until I expressed how important it was to me, and how I felt like I was losing a piece of me every time I sat in that chair and had this chemical applied to my scalp, that she understood. It took some convincing, but my mom eventually allowed me to wear my hair naturally. So, telling Alisha’s story while she’s at Nina’s salon, talking to Ma Maya…I wanted that conversation to be emotional. I wanted little girls to extract from that your hair is beautiful the way it is. Don’t allow anybody around you to make you feel like you have to straighten your hair to be beautiful because that’s never the case.

Carlease Burke, what are your memories surrounding the pressures of wearing your hair straight?

I’m 65 years old. In the 70s, when I was in college, I was rocking my afro like all of us were. I don’t remember getting any drama about having an afro. We were proud of our afros. I’m rocking my afro. I’m proud. Everybody’s trying to get the biggest, roundest, fluffiest afro possible, and it was our identity. So my parents took a trip to California from New York. I didn’t want to go, so they said I was gonna stay at Nana’s house. The day before my parents were to come home, Nana looked at me and said, “So you’re going to college with that African mess in your head?” I responded, “Yes. Yes, and it’s called an afro.” She said, “Sit. Down.” That little lady got that straight comb, sat me down, and honey, she pressed my hair.

How have you seen that change in the industry?

There is a movement. There are Black natural hair stylists that are voicing that things need to change. It doesn’t matter what color you are, we need to have qualified people on set who are knowledgeable of all hair types. And yes, Black women are going to take more time, so you have to put that into the schedule and get it done. I want to say kudos to Sydney to the Max because we had an amazing hair team for this particular episode. It was so much Black girl magic. The head of the department recognized they were not qualified to lead the hair department, so they called in a sistah they knew could handle it. She was able to hire two assistants to get all of our hair done correctly.

Ruth Righi, could you relate to Sydney’s struggles in this episode? Was finding your hair identity something you experienced in real life?

Sydney grew up in a white household, so straight hair was something that she always knew and thought that’s how things were supposed to be. I’ve always had trials and errors with my own hair and trying to figure it out, wondering why it’s not as straight, or as curly as it should be. One thing that I’ve come to learn from this episode is that biracial hair can have so many different textures and so many different styles. I think that’s what’s really beautiful about Black and biracial hair is that it can be so many things and its versatility. It is really something that I’m glad we get to represent.

I love how Sydney gets a chance to talk to her grandma Maya and that she has that guidance. I was very lucky growing up to be able to travel and be in contact with my family that lives in Tunisia, North Africa. I was able to be immersed in trying different styles and just the Black side of me, and that culture ever since I was young.  But, it’s also been a little bit of a challenge going to school and seeing your friend’s hair, and wondering why is mine not straight. You try things that don’t work; trying to brush your hair out in the morning and it gets poofy and doesn’t come out like you want it to. [Laughs.] There’s so many things you could relate to with it.

Have you felt a certain pressure to wear your hair a certain way, or has that been a journey for you in terms of finding yourself in your craft?

I’ve experienced that, and I hear a lot of people that I know in the industry and my friends go through very similar things. Being told you’re not going to be able to get a job if your hair looks like this or if it’s too much, or whatever that may be, is common. I think there’s just been times where people will kind of assume I’m a certain race or not a certain race because of my hair, making comments about it’s not curly enough, it’s not straight enough… it’s not enough of whatever their perceived notions of what a certain race’s hair should look like.

What do you hope viewers will gain from “The Hair Switch Project”?

I hope that the kids, their families, and adults can watch this episode and then be able to talk about it and have an open and honest discussion about whatever their own personal cultural identity is. I want anybody watching to be proud of themselves, their heritage, and their culture, and not feel pressured to suppress it or to not express themselves as much as they want. No matter what hair they have, it is beautiful. No matter how they identify or look, they are beautiful and perfect in their own genuine natural way.