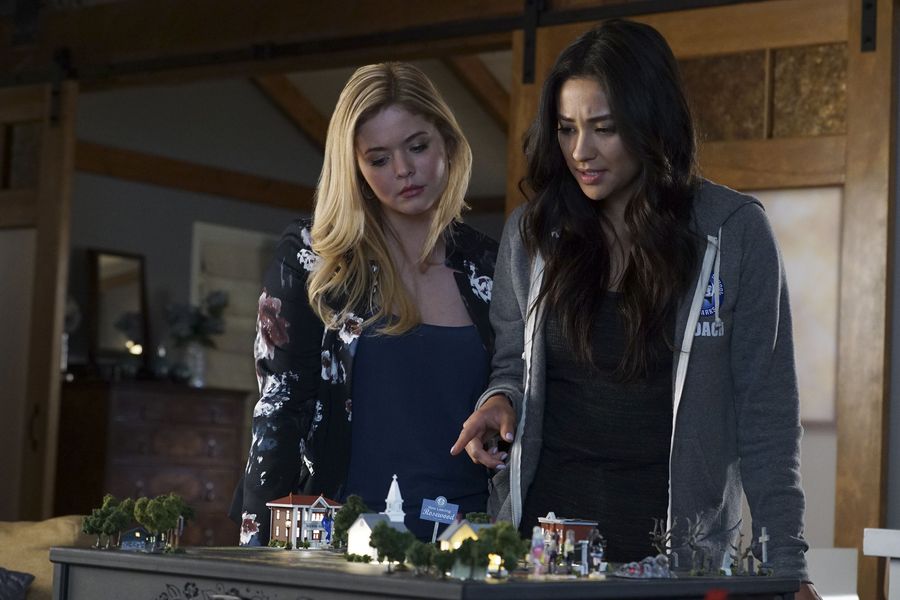 In the first scene of “These Boots Were Made For Stalking,” the Liars remain gathered around A.D’s board game, debating what to do now that there’s video of them burying Alison’s thought-to-be-missing husband. Emily wants to go to the cops and tell the truth, which sounds more appealing than twisting themselves into knots trying to keep it a secret. But the others are against it because who wants to risk prison time? None of them are wrong exactly. They have a habit of making things worse by trying to keep their secrets, but they’ll definitely have to deal with the complications of admitting their fault in Archer’s death. But would they rather deal with those complications or the ones of A.D holding it overhead?

Strangely this particular question is dropped after this opening scene, as the girls fall into other dramas. Jenna returns to Rosewood as if nothing’s happened, claiming that she was also Noel’s victim and only going along so he wouldn’t hurt her. Since Spencer’s nursing a gunshot wound from a gun that wasn’t Jenna’s, there’s no cause for her arrest either (I feel like this is a stretch, but what do I know?). Though the girls have no idea Jenna’s now officially working with A.D (her wearing Hanna’s design should be a pretty good hint,) it’s nice that we have some concrete knowledge. Former seasons have had a field day with all the maybes and maybe nots, but with only a few episodes left, PLL doesn’t have time for those kinds of hoops.

But somehow it does have time for some Alison-lite character named Addison (get it? It’s like Alison, but not) who is a more than pale imitation of the real thing. The big secret she’s willing to accuse Emily of sexual harassment to protect is that she smokes weed with her boyfriend. This is annoyingly benign in a show where we’ve seen people lie to cover up affairs with English teachers and blinding people. So it makes it extra annoying to see Emily grasping for a solution to the problem of this eighth grader (the show claims she’s a sophomore) not liking being held accountable for skipping practice.

Despite Emily’s aversion to playing the game, she falls right back into it. And not just by playing A.D’s actual game and accepting A.D’s video of Addison, but by using it to blackmail her. That’s not the move of an adult woman sick of the antics of a student. It’s the move of a high school girl fighting back against an adversary. I’m not opposed to this (on the contrary I hoped Alison would turn her powers to good and show Addison how it’s done), but Emily could have easily just told on Addison, whose main accusation was that Emily was benching her as punishment for not responding to her advances. But it’s Paige who has to be the grownup, turning over emails from Addison to the principal and Addison’s parents.

Also struggling the most in the maturity department is Aria. A.D hasn’t even touched the sticky Nicole situation yet, but Aria’s close to wrecking it without their help. She’s desperate for some clarity from Ezra, but he’s in New York, and a reporter is writing a feature about Ezra and Nicole’s miraculous reunion. That’s definitely a kick in the gut, but I can’t fathom what Aria planned on saying to Nicole if she managed to sneak into her hospital room. Was she really going to go up there and tell the traumatized and physically weakened Nicole to back off her fiance?

I’m still fuzzy on Holden’s purpose, but he makes himself useful in stopping Aria from making this complex situation into even more of a mess (he’s much better at advice than Hanna, I have to say). He points out that Ezra’s probably just as confused as her, and tells Aria to let Ezra figure it out before she returns his ring. But I’m not quite sure why no one’s suggested Aria speak to Ezra because that would be the really mature thing to do. Even if neither knows what the hell is going on or what they should do, at least they’d both know that.

It’s Spencer who’s being oddly forthcoming with people. She tells Marco the real reason she wants to find Mary Drake so badly. With Mary still out of the picture, and Troian Bellisario putting her all into Spencer’s quietly continuing torment, the soap operatics of her true parenthood are given more weight. I admit to being surprised by how restrained the show is being in this, given its ability to fly off the rails. Though it’s becoming ridiculous that Spencer’s dad remains MIA (I’d wager scheduling difficulties play a part), Veronica’s attempts to remind Spencer that they’re still family remain very impactful and sweet–though it would probably play better if we hadn’t seen how terrible the Hastings have treated Spencer in the past. Season one, anybody?