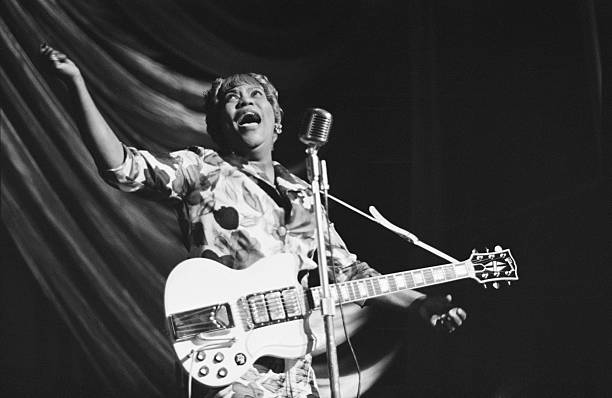 Thinking of rock music in the ’70s, the sound of the electric guitar starts to vibrate in your ear. In your mind, there are images of big hair and white boy bands along with rock legends such as Elvis Presley, David Bowie, and Pink Floyd. Even Google brings ups pictures of glamorous rock bands.

Those boys, now middle-aged (or elderly!) white men, have dominated the rock scene for years. Yet, these well-known rock bands wouldn’t have reached their fame if it wasn’t for one unexpected woman. Yes, a woman.

What might surprise you is that before rock music became mainstream, it developed its roots in gospel music with one special Black woman. The birth of rock and roll didn’t start from some 30-year-old white man drinking whisky in his backyard but from a Black woman named Sister Rosetta Tharpe.

Born in Cotton Plant, Arkansas, as Rosether Atkins before she reached stardom, Tharpe took on the stage name of Rosetta and kept the last name of her ex-husband. The ex-husband divorced her as her career started to take off. She was a legend in the making at the age of 6 years old. Yet for years after her death, her fame and talents would seem to be forgotten. Only those who had the honor of watching her live performances would hold onto the memory of her fame and talents. In fact, it wasn’t until 2018 that she was inducted into the Rock and Roll Hall of Fame.

Here’s what you need to know about Sister Rosetta Tharpe, the godmother of rock and roll, and the influence she has had over the years.

“God worshiping rockstar” sounds a bit strange, yet that’s who Tharpe was. She started her career in the church singing alongside her mother and touring across the country playing with gospel bands. This cross-country experience helped to shape her unique sound, which was a mixture of both rural and urban. Her career started to take off when she played alongside the great Duke Ellington. Her stardom hit a stride when she moved to New York and later Chicago.

Even as she became more well-known, she stayed true to her gospel roots. Her dedication helped promote the popularity of pop gospel with her hit singles “Rock Me” in 1938 and “This Train” in 1939. In 1944 her innovative gospel music played with an upbeat electric guitar started to gain recognition. Her song “Down by the Riverside” was later chosen for the National Recording Registry of the U.S. Library of Congress. She continued to take gospel music to new arenas, with her song “Strange Things Happening Every Day.” This was the first gospel song to cross over into the mainstream realm of music, hitting No. 2 on the Billboard ”race records” chart.

“Oh, these kids and rock and roll — this is just sped up rhythm and blues. I’ve been doing that forever.” —Sister Rosetta Tharpe

The one thing that made Tharpe stand out and rise above the rest was her dynamic voice and her sensational guitar skills. She played her Gibson electric guitar fast and powerful, in such a way that charisma and confidence exuded from her fingertips.

Her captivating voice had a range that would take listeners on a journey of high and low notes. A powerhouse of sound would fill the stage as she walked, swayed, and shimmied her shoulders as she performed.

Elvis Presley, Little Richard, Chuck Berry, and Johnny Cash are a few famous artists influenced and inspired by Tharpe. She has even influenced artists in the U.K. such as Eric Clapton and Jeff Beck. Bob Dylan even mentioned her as a force of nature and guitar playin’, singin’ evangelist.”

Although her fame is becoming more acknowledged, those who were able to see her live will never forget her iconic performances. Her most well-known performance was in Manchester, England. She performed outside on one side of a train track and the audience sat on the other.

As of recently more performers and artists are honoring Tharpe in new ways. The musical Shout Sister Shout, which is also a biography of Tharpe’s life, has premiered on Broadway.

Give her a listen

If this is your first-time hearing about Tharpe, then you should give her a listen. You can find her music on platforms such as Spotify or watch her signature performance of “Didn’t It Rain” on YouTube. If you’re in the mood for something more raw and authentic, you can check out the live recordings from Paste magazine. Close your eyes and imagine that Tharpe is playing in front of you, with her vivacious energy, smiling face, and electric fingers. She is a reminder of how powerful, talented, and influential Black women are, and how important it is to stay true to who you are and your art.