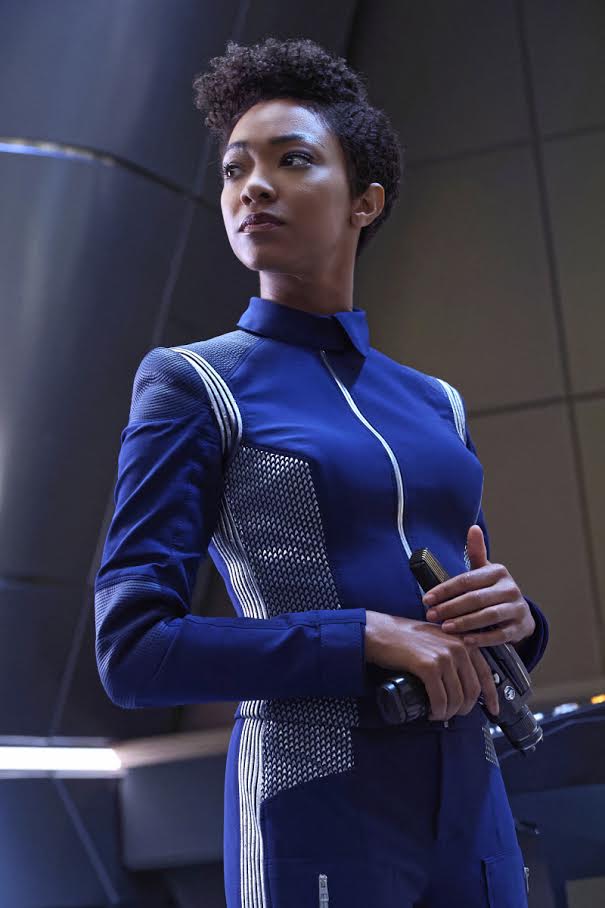 I figured that not a lot of hard core Star Trek fans would dig this episode as much as I did for a few reasons, but mainly because it has more romance and less action that your average Trek series episode. But those are my personal favorites, so if you’re like me, you might just love this episode.

And just a warning, SPOILERS ahead.

Now to the recap: The first scene had me screaming with delighted laughter in the first three minutes. Burnham walks into a party on the ship that, shock, actually looks and sounds like a party. Not a tea party where one might hear strains of Bach, Beethoven, or Brahms. Not a cocktail party that might be underscored by the blue notes of Dizzy, Duke, or Dinah. No, the groove that greets us when the doors open to the rec area opened was Wyclef Jean’s “We Trying to Stay Alive”. So, correction, this was not a party, it was a par-tay.

Ostensibly this week’s episode is about escaped Klingon prisoner Harry Mudd’s mad plan to take over and steal the Discovery for two reasons—first as an act of revenge on Lorca for leaving him behind in the Klingon prison ship when Lorca and Tyler escaped, second (and most important) to sell the ship and its valuable new technology to the Klingons. As soon as he figures out what it is and how it works, that is. Oh yeah, and he also wants revenge because he somehow blames Lorca for the fact that he was kept from his beloved Stella. He tries to accomplish this feat by trapping the ship in a thirty-minute time loop created by “alien technology”. He is the only one aware of the loop, so he can repeat it over and over, learning more and more information with each loop, and eventually learn what powers the new drive. Like “Groundhog Day”, only in space with Harry Mudd in the Bill Murray role.

Luckily, new and improved Stamets (now with “Tardigrade-Multidimensional-Being” DNA!) also can detect what’s happening with the time loop, so he attempts to enlist Burnham’s aid because he needs another genius to help. Additionally, he enlists Tyler’s aid because Tyler was a prisoner with Harry and might have helpful information. Lucky for us, Burnham and Tyler seem to be crazy about each other and that makes it easy for Stamets to convince them to work together to defeat Harry.

During one of the final loops, Burnham uses Harry’s greedy nature against him, just as Harry figures out that the missing key to the spore drive is Stamets. Just as Harry is about to allow the timer to expire—the only way to end the loop—she reveals herself to be the Klingon T’Kuvma’s killer, and therefore a valuable prize to the Klingons. After Mudd is convinced, she kills herself, forcing him to restart the time loop in order to retrieve her (a pretty ballsy move if you ask me). But this time Burnham, Stamets, Tyler, and Lorca are one step ahead of him. They manage to get the alien tech from him and, as a bonus, contact his “beloved” Stella and her dad.

Turns out he’s been running from her, not trying to get to her—a fact which Trek fans, having seen the future Stella in ST: TOS, already knew. Once again, Harry is a prisoner.

So sure, that works, but what is this episode really about? Actually, the whole Harry Mudd time loop storyline is really one big MacGuffin. The heart of the episode is Burnham’s heart. In fact, the episode should have been called, “How Michael Got Her Groove On”.

Since music played such a big part in this episode, let’s break down the highlights that way.

This is the groove that greets us as the crew lets down its collective hair. Apropos of nothing, since they are soldiers in a brutal war. This is just another reminder that the USS Discovery is unlike any ship in the fleet and ST: Discovery is unlike any other show or film in the franchise. This is the easy, relaxed atmosphere of an exploratory vessel like the future Enterprise or space station like Deep Space 9. The crew of this ship has lost friends in battle, they’ve suffered injury. They are blowing off steam and Tyler is leading them in a toast to their fallen comrades. A tongue-in-cheek move on the writers’ part, if Tyler is Voq. In that case, he’s probably secretly toasting the fallen Klingon warriors. Anyway, Tyler cuts an attractive and heroic figure as he leads the crew in the toast, and Burnham is even more impressed (and so is Tilly, who is charmingly drunk and looking for love in all the wrong places) and, despite herself, she’s twitterpated for sure.

“Well, happiness is when, you really feel good with somebody
But nothing wrong with being in love with someone, yeah.”

Burnham is still getting a handle on the whole “emotion” thing and she feels particularly awkward around Tyler, who she admires for having held up so well despite being the sole survivor of his ship’s destruction at the hands of the Klingons. That’s what she says, but it is obvious to everyone but herself that Michael has a thing for him and he seems to have a thing for her.

Luckily for us, along comes Mudd and his time loop; we get to see an accelerated courtship happen and it is Stamets who acts as Burnham’s guide on the road of love. The first thing we find out is that she has never been in love, which is not that big a surprise. Since she has suppressed so much of her heart and mind in order to fit into Vulcan society, and she’s not biologically able to experience Pon farr, the Vulcan mating cycle, the first time she might have had a chance to get involved romantically would have been in Star Fleet. By her own admission, she kept to herself on the Shen Zhou due to her Officer status, though that was clearly an excuse to avoid a socially and emotionally awkward situation for her.

But Stamets coaxes a confession of romantic feelings towards Tyler out of her, all to further their plan of stopping Mudd (right). He even teaches her to dance (a sweet moment where we find out about how he and the doctor met and fell in love) in order for her to be able to connect with Tyler more easily in the next loop. Burnham’s uncharacteristic shyness is both funny and painful to watch. The forthright, confident, and stoic Burnham seems to turn into an awkward 11-year-old Michael, flushing at the very mention of Tyler’s name.

When she does dance with Tyler during the next loop, it’s to the Al Green song I just quoted—very cool to watch (and I had to smile hoping that people will still be getting it on to the amazing voice of Al Green in the 23rd century). Kudos to the director of this episode because there was great chemistry during the intimate moments between the actors Martin-Green and Latif. The kiss was perfect and though there wasn’t any indication that this happened in the episode, in my mind, during one of those loops, Burnham must have said, “Screw it, let’s go back to my cabin.”

Conclusion
The episode is filled with small moments of fun: Harry killing Lorca gleefully and imaginatively, over and over again; Tipsy Tilly at the party on the prowl for a musician or a soldier; the father-daughter dance between Michael and Stamets, to name a few. But when the action is over at the end of the episode, Burnham and Tyler (who can only remember what happened in the final loop, but armed with all the information given to them by Stamets about the previous loops) seem to be on the path to romance after all. And, yeah, Tyler lamenting not getting to remember their first kiss did me in.

But if Tyler is really Voq, and he’s playing Burnham, she’d better get a chance to jettison him out an airlock before the series is over.