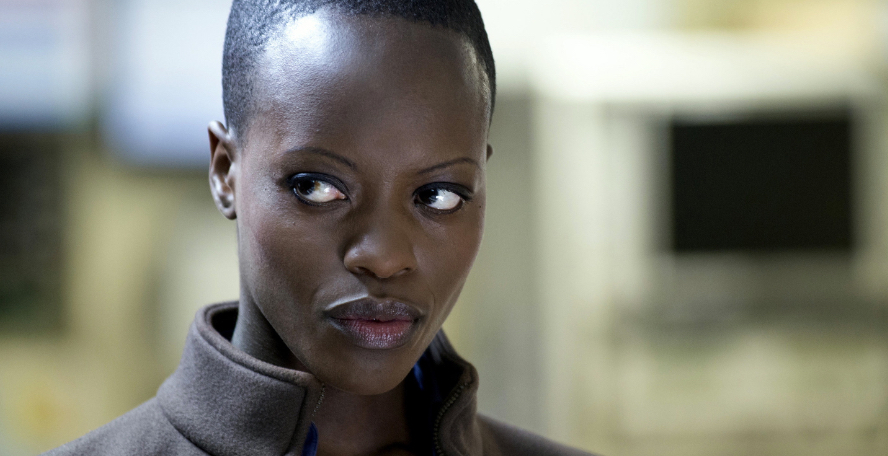 From the first impression, I admit I felt intimidated by Florence Kasumba. She’s beautiful, statuesque, and certainly towered over my small five-foot-nothing frame. Even though the weather was terrible that day, she walked into the room with a smile on her face and greeted people everyone and shook hands. You could tell she was really excited to be at the Black Comic Book Festival.

But all I kept thinking was “Move, or Be Moved.”

This signature line in Captain America: Civil War is what put the Ugandan-German actress on everyone’s radar. As Dora Milaje soldier Ayo in Black Panther, Senator Acantha in Wonder Woman, and the wicked witch of the east in NBC TV series Emerald City, she’s making quite a name for herself in Hollywood. Just know, she isn’t a newbie to this business. She’s been an actress for close to 20 years. That’s interesting, especially since she doesn’t look a day over 25. While my time with her was short, I got a chance to sit down with her to talk about the success of Black Panther, and what it’s like for the German-born talent on this side of the pond. Right out of the gate, the soft-spoken actress explained the difference between Hollywood and the German entertainment business. This conversation-starter helped me ease right into the interview:

“In Germany, I love watching interesting content. However, in America, you’re more likely to see a person of color as the hero or detective or just someone central to the story. You don’t see a lot of that in Germany. I mean the climate is changing, but it’s happening very slowly.”

Valerie Complex: Are you nervous about the film premiering in your home country?
Florence Kasumba: I thought about it, but I didn’t want to get unfocused. My attention is on the film, and it’s success. What’s surprising is I’m suddenly getting messages from Uganda congratulating me on the movie. This has never happened to me before. I’ve been working for a long time, but people are starting to take notice because I am in Black Panther. I don’t feel it right now, but in the next few weeks, I’ll probably get nervous. (Laughs)

Valerie: Now that you’re stateside, and Black Panther is coming to theaters, How do you think American audiences will embrace the film?
Florence: People will see something they haven’t seen before. It feels different watching a film with a mostly black cast in this manner. I know its something people aren’t used to. There has been an overwhelming outpouring of love and support for the film, and its characters. When the audience sees the result of our hard work, I hope there is a sense of pride. The characters are strong and watching the Wakandans revere their country made me prideful to be part of this cinematic phenomenon.

Valerie: Can talk about the comradery and synergy between the cast members.
Florence: By the time we began filming, you knew how to carry yourself, and we knew how to carry one another. I think if I had gone into this for an acting experience, I would have viewed things differently but we knew we had to get in physical shape. We show up to work, and we push ourselves so we could be physically and mentally strong. With all the blood, sweat, tears, it’s good to know we were in the trenches together.

Valerie: Have you read any Black Panther comics?
Florence: I read World of Wakanda. I’m glad I read it after filming, and not before. I realized a lot of the intuition I had for the character, matched what I saw on the page. This is great because I didn’t need the comic influence. Everything I needed to know is in the script. I didn’t have to question anything.

Valerie: I know we’re running out of time, but one last question: now that Black Panther is a part of this expanded Marvel movie universe, what does the future hold for Ayo and the Dora Milaje?
Florence: With Black Panther, people will learn about T’challa, and about Wakanda, and its people. I think that’s important. That’s not to say other factors aren’t just as important, but this isn’t just about Ayo or the Dora Milaje, this is about a country working together as a unit and how they navigate the world they live in.

As Florence Kasumba had to move on to the next journalist, I felt a real sense of pride. She’s genuinely excited to see the movie thrive, and see Black women as heroes. Are you excited for Black Panther? Use Kayla Sutton’s hashtag #WhatBlackPantherMeansToMe  and tag BGN or leave a response in the comments!