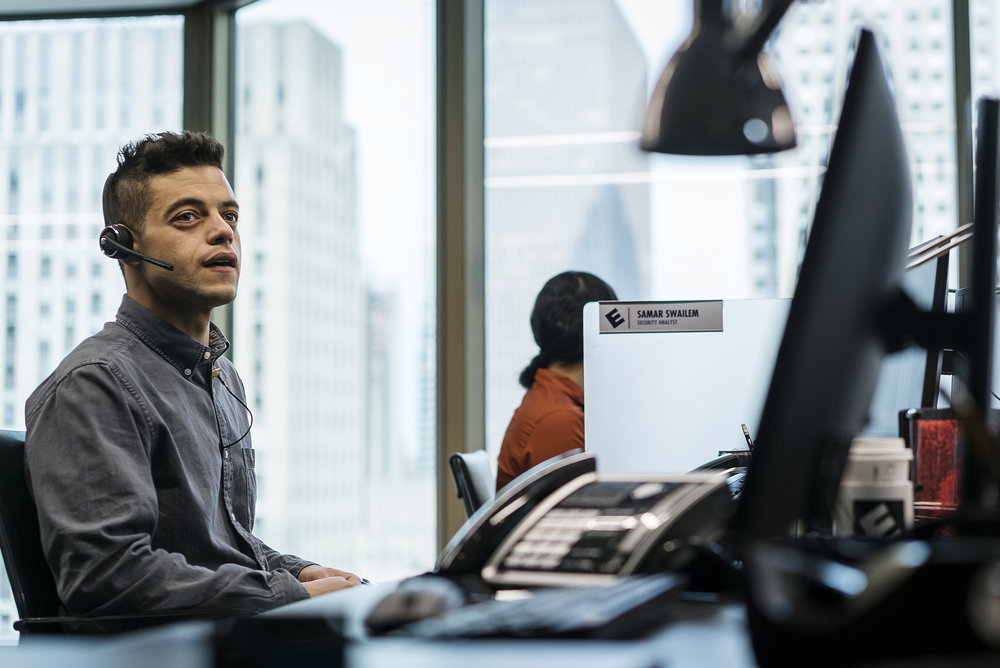 Who’s ready to talk about what happened on this week’s Mr. Robot?  Who’s prepared to discuss how and why this show snatches what’s left of our edges every damn week?

Let’s get into it! The recap this week will be a bit shorter than others and we will mainly focus on the highlights of the episode.

Tonight’s Mr. Robot is by far the most intense, heart-palpitating, edge-of-your-seat episode we’ve seen in the history of this series.

Right away Elliot senses something isn’t right the moment he walks into ECorp.  When he tries to sign in to his terminal at his workstation, his password is incorrect and he’s locked out. He places a call ECorp employee services and they tell him they can’t help reset his password.  It’s at this point that Elliot discovers he’s going to be fired today.  Our quick-thinking Elliot asks Samar if he can use his terminal and that’s when our moment of clarity happens.  Elliot sees that Stage 2 has been launched and that the Dark Army got around Elliot’s patch.  The building is about to blow as hydrogen builds up in its data center and Elliot only has a few moments to spare to save the employees of ECorp.

I really loved the transition of scenes from the use of the camera dolly following Elliot, the use of a pan as he looks around and Elliot asking us what he should do next when he moves from one floor to the next. It plays out like a role-playing video game.  Elliot asks us to help him, and even though we can’t talk back to him, he summons Mr. Robot (his adversary at this point) to help him through this major dilemma.

When Elliot sees Mr. Robot is not here to help him bail out of this one, he’s kicked out of ECorp by security. The plot thickens when Darlene drops a metaphorical bomb on Elliot and tells him she’s been working with the FBI and that she’s been helping them for months.  A defeated Elliot at this point feels completely betrayed by his own sister for hacking him and lying to him for the FBI.  Darlene goes on further to say that she spotted Mr. Robot working with Angela. I’m guessing Darlene hoped this would be a way for Elliot to forget about Darlene’s betrayal and think about Angela’s, but no, Elliot says to Darlene explicitly: “you’ve been trying to play me this whole fucking time.”

You can’t get past Elliot on this one Darlene.

There’s suddenly a group of rogue fsociety hacks that tear gas their way into ECorp and start destroying private property within the four walls of the building.  We later learn this was all an orchestrated distraction set up by Irving to get Angela to have Elliot help her to make a backup of an HSN. There’s a list of instructions she must get to Elliot per Irving to follow through with the contingency plan. Angela then takes it upon herself to complete Elliot’s assignment disobeying Irving’s instructions.

Some of the men dressed in fsociety masks, we learn, aren’t all of Dark Army’s men, which is the reason why some tried to attack Angela.  When she places a call to Irving to let him know she finished it, he asks why she was there. She mentions she was attacked by these men and could barely find Elliot in this coordinated riot. Irving says one of the best of his lines to date:

Just because we lit the fuse doesn’t mean we control the explosion.

Angela then proceeds to give the package to a man in the reception area.  He’s seen eating a burger from Red Wheelbarrow BBQ and takes the package from Angela.  He gives her his bag of food. Angela looks both frightened and dumbfounded at the same time.  Then she turns to see Elliot, who asks her, “is there something you want to tell me?”

And our episode ends.

Here’s the thing y’all, I wasn’t ready for this episode.  Every last follicle of my scalp is gone and I have no idea what I’m gonna do next week because there’s no hair left to be snatched! So what have we learned from this week’s Mr. Robot?