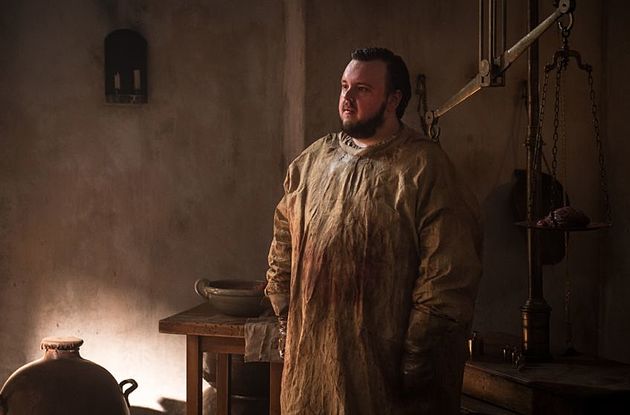 I am declaring Samwell Tarly the winner of the first episode of Season 7 of Game of Thrones.

Why? I know he didn’t win a kingdom. He wasn’t even fresh from battle. GOT’s most famous nerd, however, did succeed in his mission, which was the most important of anything any of the characters did in that first episode.

Samwell Tarly spent most of “Dragonstone” cleaning chamber pots and trying not to gag. He was there for the long game, a mission his best [jock friend] Jon sent him on long before the former Keeper of the Watch became the King of the North. As Arya continues her kill list, Cersei contemplates her next move, and Dany begins her surprise attack on Westeros, Sam has the real fight in mind and is biding his time until he can make his own contribution.

Remember the first season, when Jeor Mormont, Lord Commander, made the discovery of Wight Walkers and their plan to invade Westeros. He begged for men from the keeps and kingdoms. No one took him seriously. He thus tried to make do with the scraps that the kingdoms sent him, knowing full well that it was not enough. He had also seen the Wights that were bearing down on Westeros and the Wall. The kingdoms were no match for the Winter Wights that were coming.

Jon took over and recruited the wildlings, but they weren’t enough. In this first episode of Season 7, Jon is holding court over the wardens of the North, trying to get together a plan to keep the Wights back and shore up the Wall. Sansa, however, is as caught up as the rest of Westeros in the conventions and minutiae of who owns what castle. She is still in the game of thrones, with her Cersei-mimicry. She is not fooling anyone. What she is doing is derailing Jon from his mission to fight back the Wight Walkers.

Jon does succeed in gaining everyone’s loyalty with the support of Lyanna “Can’t Nobody Tell Me Not to Defend My Land” Mormont. He also gains more valuable fighters by recruiting women and expanding the legal age of a fighter. Sansa is more concerned with Cersei, despite the look on Jon’s face when he tells her that he has seen the Wights and he fears them most, as he should. The very sight of a Wight Wun-Wun alone will send Cersei behind the frightened shoulder of her Mountain. Even he is no match for the skeleton soldiers.

But, the only people concerned about this outside the walk are Jon and Sam. Jon is trying to strengthen defenses, while Sam — working harder than a grad student to avoid student loans, takes all the work they give him — is biding his time until he can get into the vault with the most prized books on winter, Wights, and Dragon Glass.

And that is where we hook up with our favorite Westerosi nerd. He is juggling class with a nasty ass jobs in order to stay in the Citadel. Every other second of the montage has Sam dry heaving, but he hangs on.

He is rewarded after swiping the key and getting into the forbidden books. He and Gilly find the arsenal Jon needs to fight and defeat the Wights. There is a whole mountain of dragon glass. Sitting right under the mountain where Dany just landed in her homecoming to Westeros. Cue the drama in the next few episodes. And the inevitable meeting of the Targaryans.

In the long-run, Sam’s discovery of the location of dragon glass is the most important win of the episode. It is a definite win for not the warrior, the queen, and not even the Kingslayer, but for the lowliest of all: the nerds!