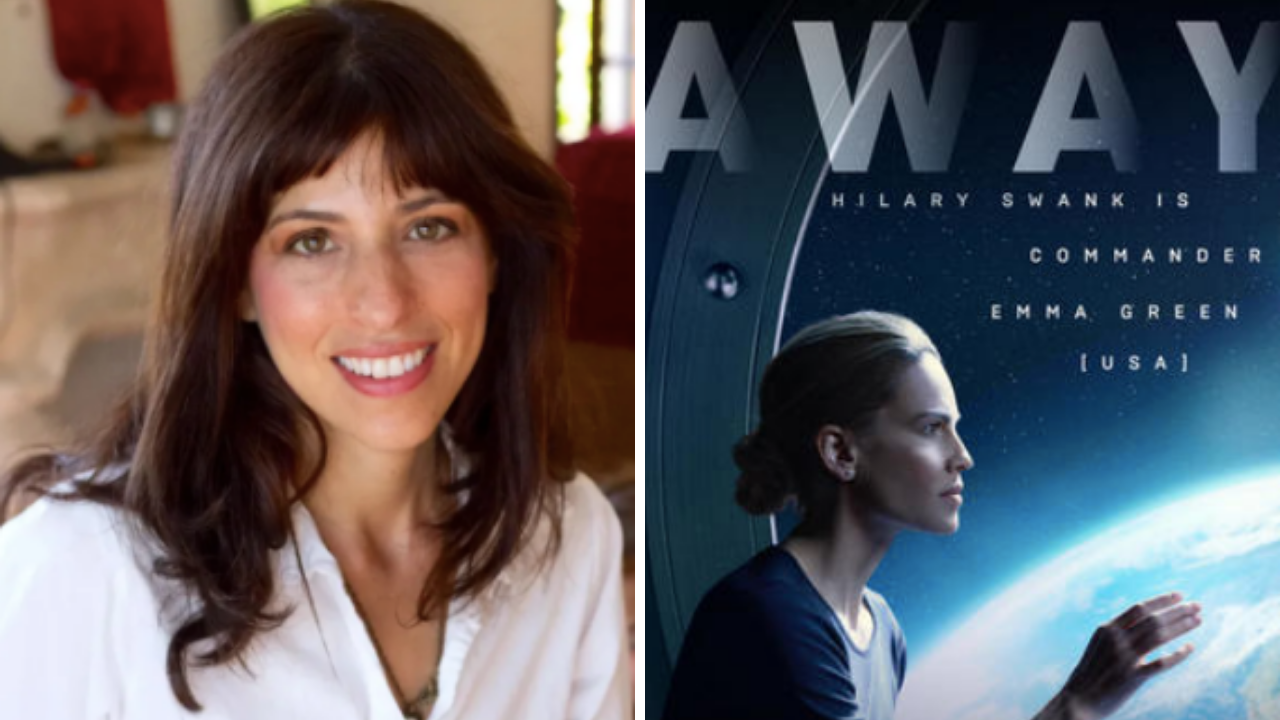 Remember The Path, the spooky cult series and Aaron Paul’s first streaming TV job after Breaking Bad? Remember all the popularity of those couples and plots in Parenthood? TV writer and showrunner Jessica Goldberg gets the credit.

She, along with Jason Katims, is the writer/producer of Netflix’s space drama, Away. The series has received criticism from those who may have expected more action, but Away isn’t about conquering brave new worlds (there’s not one “kaboom” in the first episode) or even completely focused on boldly going where no one has gone before. It’s about understanding the pressures that a demanding career puts on family life.

Interestingly, while writing about family in Parenthood, Goldberg was going through a divorce in her private life. She understands those pressures personally.

In your own words, what is the story of Away?

It’s about the world coming together to make a trip to Mars. Emma Gray [Hilary Swank] is the commander of a ship and has to leave her family behind for three years. It’s a story of how astronauts from different nations overcome their issues on planet Earth.

The cast is Hilary Swank, Josh Charles, Vivian Wu, and Ato Essandoh. Are they the actors you would have envisioned when you were writing it?

We got so lucky with this cast. First, we had to imagine who could be this woman who would go into space with what it takes. You have to be so physically and mentally resilient. So Hilary was the first person we thought of for that role, and we got so lucky with her because she had a vivid dream to be an astronaut when she was a kid.

Yeah, it was amazing. She came into our offices, sat down, and said she had always wanted to go into space. It was a perfect match, a match made in heaven.

Then with the others: Vivian came in from China and Ato we found on a tape. It was interesting; his character was Nigerian. We cast Ato, and his family is from Ghana, so we changed the backstory to fit Ato’s own heritage.

Josh Charles is this man who supports this woman who is brilliant. This man has his own kind of integrity, he goes on his own physical transformative journey, and he has to struggle in the show. We needed a very strong actor who could [support] her. I think they are just beautiful together. You really buy this couple.

Ray [Panthaki], who plays Ram from India, we also found him on tape. He just had this kind of quality. Mark [Ivanir] who plays Mischa, the Russian astronaut, is an actor who’s been in a lot. So when he came across our desks, we were very excited.

What was your inspiration for this story?

There was this article called Away by this wonderful Canadian writer called Chris Jones. He writes a lot about space. The article is about Scott Kelly, an astronaut. He’s in space when his sister-in-law [former U.S. Representative] Gabby Gifford was shot. The article talks about what it’s like to be up in space when this traumatic thing happens on earth.

He has this beautiful [interview]. You have to watch [Kelly] on YouTube. It’s from the space station. So our creator Andrew Hinderaker read that article and was so inspired by the draw of space, the hope in space, and that relationship to the earth.

Also, please give us the inspiration for The Path.

For The Path, I was going through a personal, very difficult time in my life. I was working on Parenthood, I had just gotten divorced, and I wanted to write about when your life didn’t make sense anymore.

When you wake up one day and all these things that you thought you believed in … it may sound very esoteric but that is it. It was very emotional. I was breaking up from the marriage and trying to redefine my life.

I took some time off from Parenthood and had worked with Jason Katims who I’d ended up working with on The Path and on Away, so he decided he’d like to try to create it with me. So that came a different way. The Path was a wildly wild show, and I think all these come from weird, little ideas but also emotion that you are trying to work out.

Deception with Meagan Good was so “good,” but it didn’t do so well. What happened there?

It’s so hard to make a network show [work]. When I first started in TV, that was where shows were, on network. Where you’d go work on something that you loved in production.

Not a lot of people watched it. I don’t know. Maybe it could have had a [better] audience or a more unique audience but then … you know, it’s a mystery to me.

How often did you rewrite or tweak the script for Away?

Andrew and I have our hand in probably all the scripts, but we have a staff of incredible writers who bring so much to the script. So sometimes we don’t do much; sometimes we have to do a lot.

How long did it take to get the project off the ground?

I think for the original people, which are Jason, Andrew, and Matthew [Matt Reeves], it might have been a two-year journey. I came in last summer and then we wrote, we cast it. We shot up in Vancouver, so I’ve been involved a little over a year.

This is your third big TV production in recent years. At this point how easy is it to get things greenlighted?

Tell us about Cherry, written by a guy in prison. You worked with the Russo Brothers, but this is not a superhero type thing.

I love the Russo Brothers. They have this amazing situation. They auctioned this book called Cherry, which is a true story. Nico Walker was in Iraq. He was a war hero. Came back and without support — a young man — he got addicted to drugs and became a bank robber in Cleveland. I think he robbed twelve banks.

He started writing in prison, and his book is just a heart-breaking, emotional, wild journey. So the Russos felt very close to that story. It’s in their hometown of Cleveland, which has been devastated by the opioid crisis.

You’re doing more personal stories but superheroes are a thing, no pun intended. How do you stay on your “path” with so much temptation to write for that genre?

It’s interesting. Now that I’ve worked a bit, I have more opportunities. I have a lot of diverse opportunities, but it has to move me in some way. I really have to feel something. I have to feel like it’s important to put in the world.

For me a lot of it is emotional. It’s an emotional connection to the material.