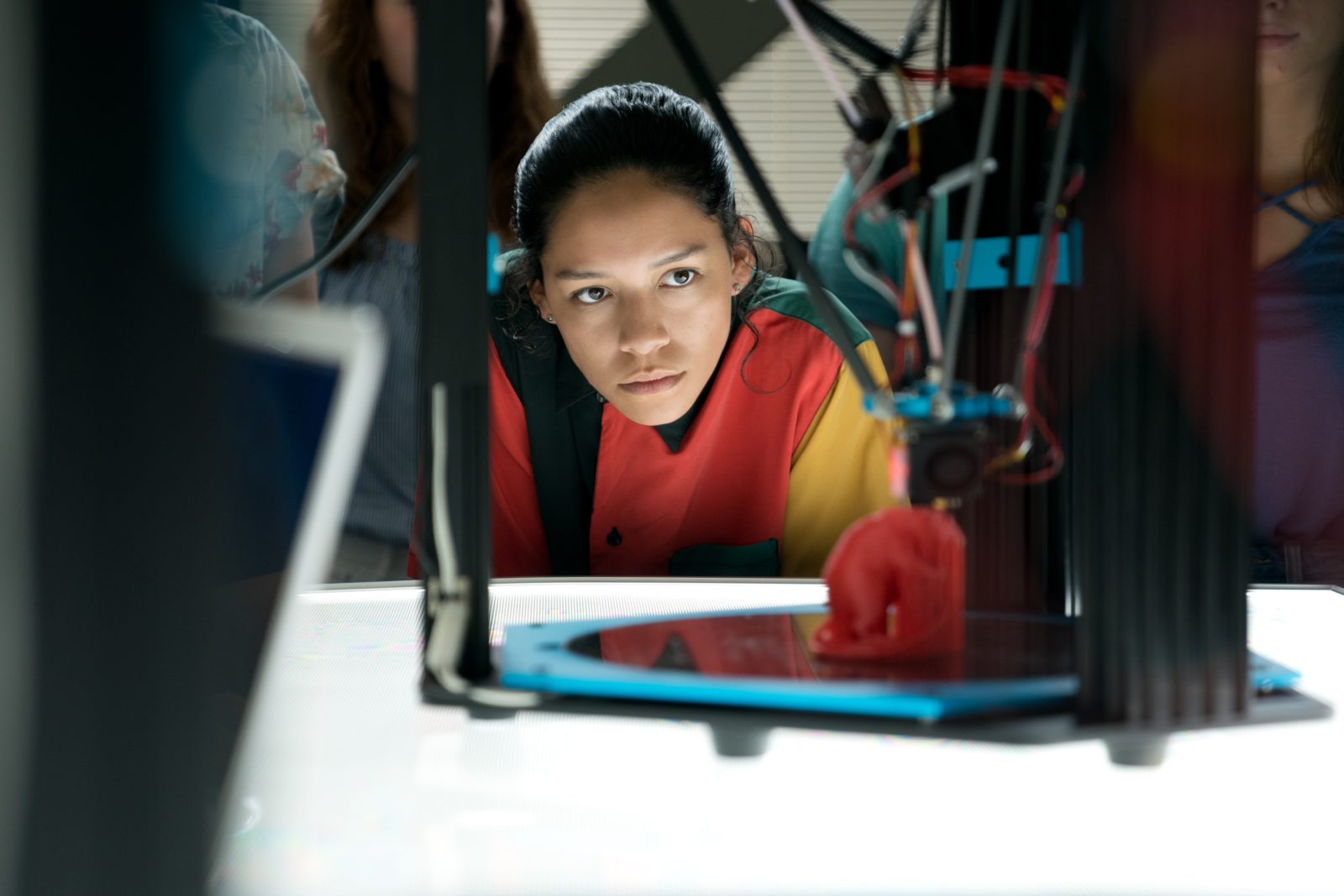 Netflix’s ‘Chambers’ is a ghost story featuring Native Americans with not an Indian burial ground in sight.

On the night Sasha Yazzie (Sivan Alyra Rose) is about to lose her virginity to her longtime boyfriend TJ Lochlear (Griffin Powell-Arcand) she has a heart attack that almost kills her. Sasha would normally be at the very bottom of a donor list. She’s Navajo/Diné, low-income, and with no health insurance to boot. In an act of absolute desperation, Sasha’s uncle Big Frank (Marcus LaVoi) signs a waiver for a heart that nobody else wanted, to be transplanted into his niece, paid for by people who chose to remain anonymous. These creepy reasons are revealed as the story develops. Sasha survives and heals, but increasingly strange things start happening to her that she can’t help but link to her donor heart. Featuring television’s first ever Indigenous leads in a show, Leah Rachel’s Chambers takes us on a nightmare ride as Sasha and her allies try to find out more about the disturbing origins of her new heart. 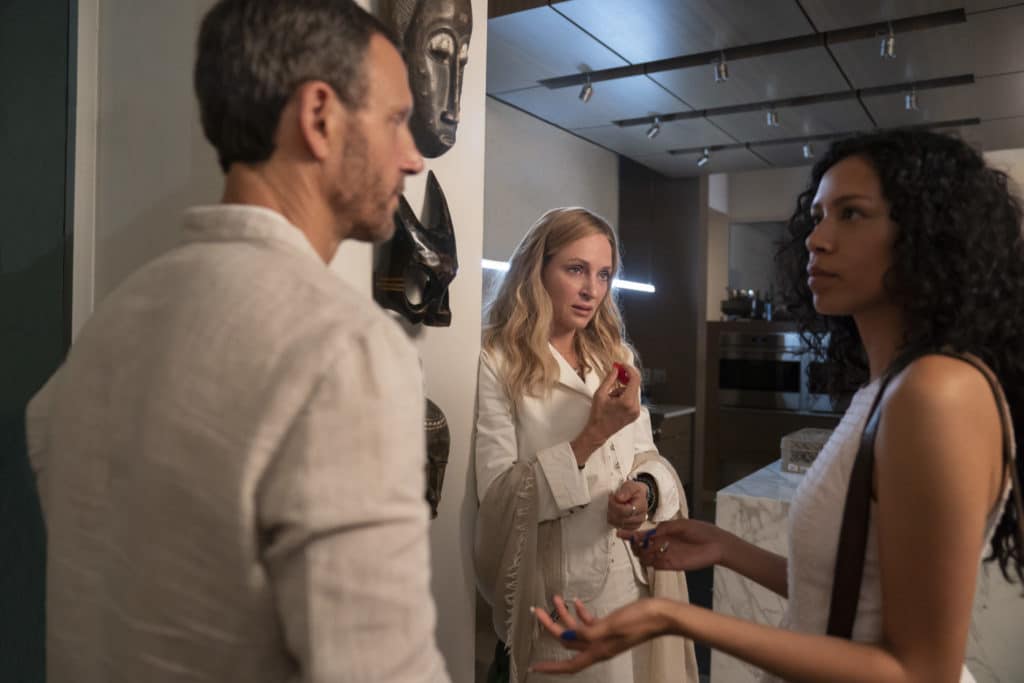 Out of the blue, and months after the surgery, Big Frank gets a call from Ben LeFevre (Tony Goldwyn), the heart donor’s father. Ben and his still-grieving family want to connect with Sasha in an attempt to get to know the woman who has beloved Becky’s (Lillya Scarlett Reid) aortal chambers beating strong in her now-scarred chest. Sasha doesn’t want to meet them. But she grudgingly agrees to go for dinner at the LeFevre’s mansion out in the Arizona desert. After a freak sandstorm hits Crystal Valley while the Yazzies are visiting, Sasha and Big Frank end up spending an awkward night with the odd LeFevre family.

And while snooping around Becky’s bedroom — maintained exactly the way she left it after what the LeFevres claim was an accidental death — Sasha finds a hidden camera as well other bizarre clues that suggest not everything is as perfect in the LeFevre house as it seems on the surface.

Being in the home of the heart donor and meeting her family affects Sasha more than she wants to admit. Especially as she starts seeing things as if through Becky’s eyes and remembering events that did not happen to her. Sasha decides to take the scholarship the LeFevres offered to elite Crystal Valley High in order to learn more about Becky and what seem to be more and more mysterious circumstances around her death.

Aided by her best friend and tech genius Yvonne (Kyanna Simone Simpson), the more they dig into the LeFevres and their connections to the enigmatic New Age healing center The Annexe, the more their suspicions mount that something truly dreadful happened to Becky before, during, and after her death.

The fact that this is the year 2019 and it’s the first time a TV show has ever featured Native American leads is a fact by itself gobsmacking. What’s also notable about Chambers is that the entirety of the top-billed cast are people of color, with Uma Thurman as Nancy LeFevre and Tony Goldwyn appearing in credits as supporting stars even though they share equal screentime with everyone else.

It is through this Indigenist lens in particular that Chambers becomes much more than just a body horror, possession narrative, and trauma of the home story. Natives consistently receive sub-par healthcare, and it is perfectly fitting the American medical-industrial complex would lead to an Indigenous woman receiving a heart that nobody else in the vicinity wanted as much as they might have needed it. When Sasha begins having problems with the heart, the doctors dismiss her experiences as anxiety and give her pharmaceuticals her uncle can’t afford. Which leads him down an ugly spiral of things one must do in America without insurance and medical necessity.

The social commentary only deepens. The LeFevres feel ownership over Sasha because she carries their daughter’s heart. Sasha has been literally colonized from within by a gaslighting white woman — named Becky no less — and now privileged white people think Sasha is theirs.

Crystal Valley High is covered in offensive Native American stereotypes with its sports mascot being “The Braves”. It isn’t until an actual Diné attends the school that they paint over these murals and change the mascot.

The Annexe and its woo-woo practices are all various forms of cultural appropriation — often anachronistic — taking place on stolen Native lands. Arizona is treaty territory, and those treaties have been long-broken. Settler-colonist spirit is a dramatic wallpaper to a story about a Navajo woman indeed, and especially in its subtle criticism of this unequal power dynamic and economic disparities.

Chambers also has a deep discussion about Natives who have been displaced from their family, people, and traditions for any number of reasons. Big Frank has a fraught relationship with his family on the rez because of how they treated Sasha’s mother before her death. Sasha is part white, so not considered Diné enough. Sasha doesn’t speak her language, and has to negotiate TJ’s full-blooded Pima and Diné families who don’t think she’s a good fit for him, shunning instead of welcoming her.

Because of their sense of alienation from their own people, Sasha and Big Frank’s relationship is truly stunning. Frank is emotional and loving, dedicating his life to taking care of his niece. He owns a business. He doesn’t drink. There is no abuse of any kind in their household. And he and Sasha are as close as a father and daughter could be. It is amazing to see Indigenous Americans presented in such a positive and three-dimensional way, mostly because we rarely see it on screen. Yes, issues of addiction do play into Chambers’ plot, but these too are presented with empathy and compassion.

At first, I was irked by Yvonne’s characterization as the Black best friend trope. So tired. But as Chambers unfolds, Yvonne becomes a lead in her own right and vital to the story. I will never get tired of seeing Black girl coders on screen, especially when they have dark skin and natural hair. Katherine Johnson would be so proud. And Yvonne’s family is also presented three-dimensionally, and blissfully stereotype-free. Praise be.

Other than its groundbreaking work as the first show with Native American leads, arguably the most important message from Chambers are the ideas of consent and agency in all aspects of life. Sasha chooses the night she will lose her virginity, but neither she nor Becky chose what would happen with that still-beating heart. Sasha’s sexual agency as an Indigenous woman is so important, especially as one of the main stories we hear over and over from Indian Country regards the high levels of sexual assault against Native women. Try and name one other piece of visual media where an Indigenous woman doesn’t have sexual violence in her’s or an ancillary storyline. I can think of only one: Miranda Tapsell’s Top End Wedding.

Chambers’ terrifying narrative about loss, grief, and trauma spins us into a horrifying whirl of monsters and madness, it also highlights the dangers of family secrets and how the things we keep from the people we love can eventually turn into poison pills that kill. And as Chambers escalates to its gruesome and powerful conclusion, we look back to see all the moments where people made choices for others without explicit consent. Each of those self-serving acts cause tsunamis of toxic side effects, from the Yazzies to the LeFevres and everyone connected to them via Becky’s donor heart.

From its issues of consent, colonization, cultural appropriation, forced assimilation, the ghosts of Indigenous genocide, the perils of cultural displacement, and so much more all the way through these 10 hours of incredible Indigenous representation on screen, Chambers is not just the way forward for more inclusive horror stories. Chambers is a new gold standard for representation and inclusion in general, especially for Indigenous Americans who deserve to be seen on screen in these kinds of nuanced presentations so much more than we have previously.