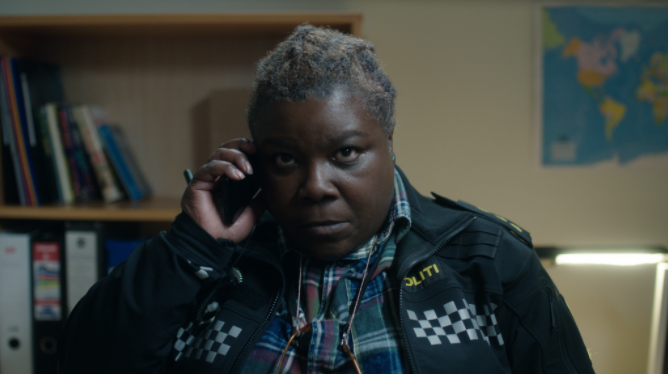 Ever notice how in modern American crime dramas, from CSI to Law and Order, everyone (especially the women detectives) always has perfect wardrobe and hair? Ever notice on TV in the United States in most cases, the murder is of a young woman or girl and is neatly solved in 48 minutes (plus commercials).

Across the pond, Nordic Noir is a deliciously sinister crime/thriller genre from Scandinavia where everyone (especially the women detectives) looks rumpled like people are in real life, the featured murder of the series actually may be a boy or a man, and it takes 6 to 12 episodes to solve one murder. In addition, Scandinavian crime dramas tend to be deliciously macabre, take place in fall or winter, and have beautifully dramatic drone shots.

Nordic noir is smoking hot on streaming services right now. Since 2012, Netflix has been producing TV series in Scandinavia. Netflix shows The Bridge, Deadwind, and Bordertown earned high ratings and critical acclaim. The influence of Nordic noir has traveled across the pond and landed squarely in Pennsylvania on HBO Max’s Mare of Easttown, earning the series 16 Emmy nominations this season.

Netflix’s Post Mortem: No One Dies in Skarnes is a Nordic noir dramedy/thriller that is simply fantastic. In Episode 1, 32-year-old nurse Live (Katherine Thorborg Johansen) is pronounced dead by small-town police chief Judith (Kim Fairchild), but as the pathologists make the first cut of the autopsy Live wakes up, right on the examination table. She now has a ghastly unappeasable craving that upends the quiet town, sending the three-person police force into full-on detective mode. To complicate matters, Hallagen’s funeral parlor, the family business, is in decline because no one dies in Skarnes. Throughout the season, Live’s older brother Odd (Elias Holmen Sørensen) ends up having to manage the funeral home and discovers the bank is about to foreclose. This puts him in a moral dilemma that raises the stakes and immediately hooks the audience.

Post Mortem is creepy, weird, filled with suspense, super funny, and is actually able to pull off being totally heartwarming. From the first frame, the show is totally unpredictable. The writing is clever, the jokes are satisfyingly shocking, and, just when the audience feels comfortable with a character, the plot takes us on a journey we never thought we would be on. This show is so well written the audience simultaneously finds themselves rooting for everyone and wanting everyone to get caught. What a ride!

Every single one of the actors is superb. Kim Fairchild (Norwegian-born in NYC) plays police chief Judith and she is just wonderful to watch. Her comic timing is brilliant, and she is able to hit all of the dramatic nuances of this character to entice the audience into believing we are watching a real person experiencing her life, not just an actor saying lines. First of all the character is a fully fleshed-out person written with nuance, humor, character flaws, and a life outside of her job. Here is a professional Black woman, who has worked in her position for 20 years and is excellent at her job and she’s jaded because she’s been doing her job for so long.

ALSO READ
‘House of the Dragon’ #DragonsYall Recap: “We Light the Way”

Judith is a police officer with a past. She investigated Live’s mother 20 years before when a series of unusual deaths occurred. She made mistakes connected to that case but was still able to maintain her career. But with the recurrence of unusual deaths happening all around Live, was Judith right all along about the Hallagen family?

Often when Black people are cast in TV shows with all-white casts, the Black character is a diversity token written to serve the plot points of the white characters without conflict. In Mare of Easttown, it’s blatant. All of the Black characters; the police chief, Mare’s therapist, Mare’s daughter’s girlfriend, Mare’s high school basketball teammate, and her opioid-addicted brother are all one-dimensional characters without any life on-screen other than to support the white characters storylines.

As a police officer investigating possible multiple murders, however, Judith is all up in the business of investigating anyone who seems to be fishy, and she does it while taking time to get her coffee and buns (the Norwegian equivalent to American donuts) at the local cafe as she and her sidekick Reinert (Andre Sørum) carry out their detective work.

It’s always refreshing to see how TV shows in the UK and Europe portray women (including women over 40) in society with lives outside of motherhood and relationships with men. Skarnes, Norway, is a really small town, and the show reflects reality. We see a small town of multi-generational women who have wrinkles, natural hair, and no makeup, and are wearing the same items of clothing in the span of weeks the series covers just like people do in real life. Then there’s the fact that Judith is a Black Norwegian person, unapologetically living her life with her family and doing her job with passion, which is just really cool to see. Be prepared to binge this series because Post Mortem will “awaken a hunger” inside you and leave you yearning for more.

Post Mortem: No One Dies in Skarnes now streaming on Netflix.