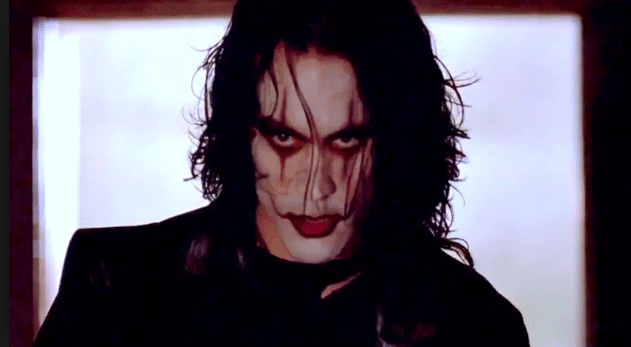 “If two people are meant to be together, nothing can keep them apart.”

Welcome to Devil’s Night Eve, October 30th, when The Crow’s version of Detroit gets set ablaze into a nightmare scape of reds, blacks, and greys by organized crime mobs. All bets are off for the civilian population. This year, four of crime boss Top Dollar’s (Michael Wincott) henchmen brutalize a young couple on the night before their Halloween wedding. Neither Eric Draven (Brandon Lee) and his fiancee Shelly Webster (Sophia Shinas) survive the attack, which was entirely the point. Shelly had been mobilizing tenants for better conditions in the apartment building and the goal was to shut her up. Eric and Shelly left behind Sarah (Rochelle Davis), a local teen with a deadbeat mom Darla (Anna Levine) who they had informally adopted and cared for.

“People once believed that when someone dies, a crow carries their soul to the land of the dead. But sometimes, something so bad happens that a terrible sadness is carried with it and the soul can’t rest. Then sometimes, just sometimes, the crow can bring that soul back to put the wrong things right. If two people are meant to be together, nothing can keep them apart.”

Exactly one year later Eric screams and grasps his way out of his grave, his suit split up the back as they do in funeral homes — giving a morbid yet realistic touch to this strangely bewitching gothic zombie horror-revenge love story. With the help of an enchanted crow, Eric returns to the scene of the crime and relives every moment of Shelly being violated by the group of laughing thugs headed and egged on by T-Bird (David Patrick Kelly) as well as his own death through stabbing, shooting, and an eventual fall from a multiple-story building. As The Cure sings, “just paint your face, the shadows smile,” Eric outfits himself to avenge his beloved Shelly’s horrific end by killing the perpetrators one by one. He is first pursued by Officer Albrecht (Ernie Hudson), the first responder to the original crime, but soon finds an unlikely ally in this disgruntled former detective demoted to beat cop.

Brandon Lee’s physical and emotional roller coaster of a performance is as tear-jerking as it was 25 years ago. From heartbreak, rage, pain, love, and even brief moments of humor Brandon Lee brings all the pathos to the table. Like Heath Ledger’s iconic Joker, Lee demonstrated an untapped rawness and talent that never had a chance to properly flourish in the kung-fu films for which he was previously known before The Crow. Brandon Lee was actually killed during filming by an improperly loaded blank bullet just three days before the movie was about to wrap. The remaining scenes were filmed using Lee’s stunt double Chad Stahelski and digitally imposing Lee’s face. (Stahelski would go on to be Keanu Reeves double in The Matrix films and now helms the John Wick franchise). Brandon Lee’s death was ruled an accident, but rumors continue to abound. I still mourn this loss. In fact, after surviving a gun crime myself it was almost a decade before I could watch what had been a favorite movie from the first time I saw it. I bawled the whole way through. 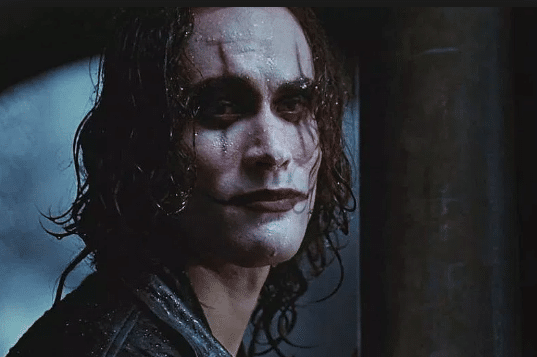 Revisiting The Crow now reminds me of just how far ahead of its time it was when it comes to utilizing new special effects and camera tricks. The gothic urban landscape is a creepy homage to steampunk as we go on several crow-eye-view flights over the city as Eric enacts well-deserved and case-appropriate revenge on Tin Tin (Laurence Mason), Fun Boy (Michael Massee), T-Bird, and Skank (Angel David), using each of their own preferred tools against them. The Crow is one of the first films to utilize CGI in a substantive way, and unlike many other movies, their artistry has actually held up even in HD.

Another aspect of Alex Proyas’ direction that is still rare even 25 years later is how he utilizes the female gaze to tell this story. Shelly is grotesquely gang raped, but we do not see it happen in detail. Just hints and flashes. I think this is a big reason why I continue to watch this film even with gun violence aside. The Crow doesn’t exploit the women in its story, and in particular, the violence committed against them. The female gaze is so obvious in this adaptation of The Crow watching it now I actually wondered for the first time ever why Shelly wasn’t the one to return from the grave and avenge herself.

Diving deeper into the production, The Crow’s grunge and industrial soundtrack is still as legendary as the film two and a half decades on. I grew up abroad and one of the ways I heard of new bands was through movie soundtracks. This album introduced me to Nine Inch Nails, Henry Rollins, Stone Temple Pilots, The Jesus and Mary Chain, Rage Against the Machine, Violent Femmes, and Jane Siberry, My Life With the Thrill Kill Kult (whose albums I had to hide from my mother because of their name), which have in turn been gifts who keep on giving over the course of my life. Graeme Revell’s score is as emotive as Brandon Lee’s final performance and a perfect counterpoint to both the action as well as the soundtrack.

I’d always been fascinated by art on the body and would draw on myself constantly since I was a kid. As I got older and mentioned wanting to get something permanent one day, my parents were quick to inform me that Asian women don’t have tattoos, and certainly not Sri Lankan ones. The Crow was the first time I’d ever seen a tattooed Asian woman. And she was so weird, and so freaking beautiful. As my eyes crawled over Myca’s (Bai Ling) enormous crow tattoo on her back, I vowed to one day have lots of tattoos too. Big ones, like hers. Top Dollar says, “Childhood is over the moment you learn you’re gonna die.” Childhood is also over when you realize your parents are outright lying to you to control your choices. I saw this movie at 15. I started getting tattooed at 18, and haven’t stopped since. I think about The Crow every time I go under the needle. The Crow is more than just the revenge love story that grabs me and has held on. It’s the entire visual styling of the film that has since literally gotten on and under my skin with all the designs now marked there. I even gave myself wings. 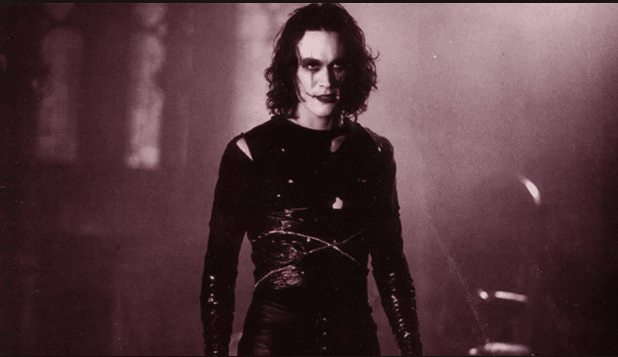 With its homage to Blade Runner, Batman, and Edgar Allen Poe’s entire aesthetic, The Crow remains a moving tribute to the art of vengeance. The melancholy that comes with Brandon Lee’s real-life death adds an entirely new level to this, one of the most violent and darkly beautiful love stories ever told. Sarah closes the film saying, “If the people we love are stolen from us, the way to have them live on is to never stop loving them. Buildings burn and people die. But real love is forever.” Amen, Sister.