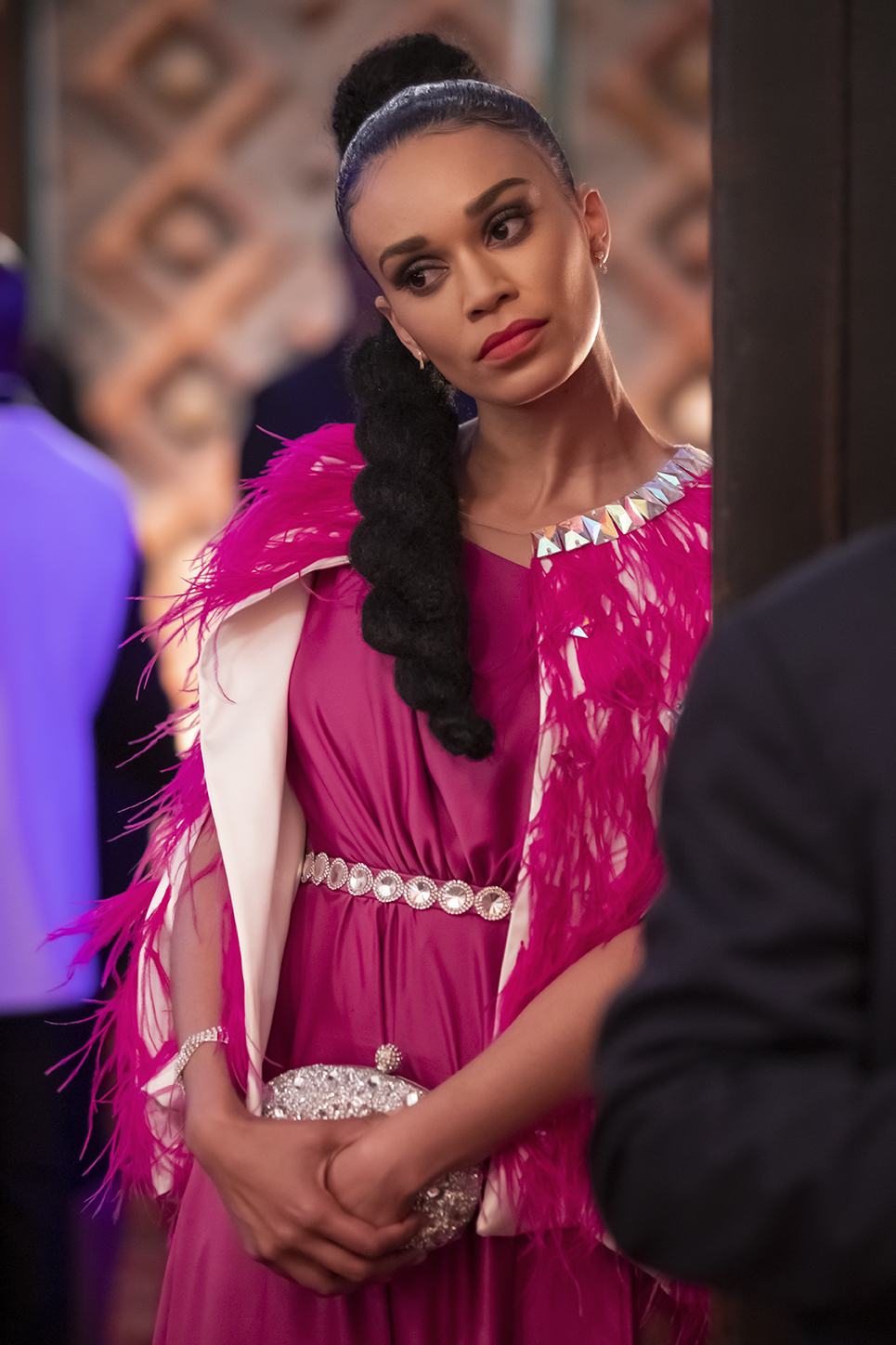 In our second recap of the Netflix series, Queen Sono we recap the episode “Dying Is Sore”.

Harare, Zimbabwe has Queen glammed up as a potential client for Superior Solutions that is ran by the mysterious Elton Davenport. Superior Solutions is a company that sells illicit weapons. In a high slit fuchsia dress, sis looks like she is trying to get attention. Fred is in a van outside seeing everything from the contacts that he gave Queen. He drops the bomb that Hendrikus is dead but I doubt his so-called illness killed him and I think Queen thinks the same. Everlyna Song, a friend of “Francine”, requests the assistance of a possible criminal and Queen uses that as into the VIP room.

Catching the eyes of the very sexy Elton Davenport, she gets him to talk business while they dance. The discussion is cut short by a phone call from his sister who is fluent in Russian. Elton’s name is Vitali and he has connections to the leader of the Watu Wema, Shandu Magwaza (Vuyo Dabula). Suspicious. Also, Elton/Vitali’s father was head of the operation and put him in charge. I predict that the sister and Queen will be combating in an episode soon. The girl has moves and can take a punch. Queen has Elton suspicious and nearly gets her outside but considering that she upsets an old enemy, a shoot out happens. I’m not even sure if Elton is alive after getting shot. At least Queen is able to get out without a scratch.

Elton/Vitali’s sister, Ekaterina calls out the leader of Watu Wema for his fake “soap box speeches” that get liberated men killed. Vitali has been giving these men a portion of their weaponry and it doesn’t please his sister at all. She threatens to do something if it happens again. By the way, Elton is dead, and Queen hears it from Miri and Sid (head handler I think). But we got intel! Ekaterina Gromova is owner of GromCorp and daughter of Victor Gromova, known as the butcher. SOG

You know that Queen wasn’t going to leave the Hendrikus death alone. Posing as his hospital nurse, she rocks up to his home and speaks to the family. Obviously, they are devasted and think he is innocent of his crime. Miri and Nana discuss Queen’s abilities to handle things. It doesn’t seem that Nana cares for the Queen as much as she does for her career. It must be nice to host a president that you don’t like in your home. At Hendrikus’ home, Queen is going for the Oscar acting as she cares about this man and his family. Hugging someone who thinks that you are lesser than is not easy but she gets out with a phone in hand. Nana is making waves with President Malunga and guests. Her speech on Safiya and her disgust at corruption in politics really got to them.

After a game of paintball, Queen is subjected to political rambles made by William and Nova’s friends. People honestly just talk crap without thinking who is in their midst. Nova does her best to shut them up. William brings up that should Queen should see a therapist but when she slams that down, he brings up an international work opportunity that will leave Queen alone. When is she going to admit that she likes him?

Safaris in Kenya are on my bucket list. Ekaterina is camped out there with her father. Victor isn’t pleased with her lack of ability to keep her father alive and he isn’t budging on the idea that she won’t lead his company. She thanks him for being sexist and pushing her to be better than her brother. Ekaterina smothers her father to death then promises her baby bro that she will find his killers. Shandu and his right-hand man, Bulabule, discuss riches before they are interrupted by Ekaterina. She offers Shandu the opportunity to be a leader of the continent after they change the country. His group will burn the country down while her company saves it from the flames.

I want to know more about Fred and his missing sister but we have possibly bigger problems. The company that Queen and Sono have been working for, SOG, has been paying Superior Solutions. Queen assumes that it is the director, Dr. Sidwell. My money is on Miri.