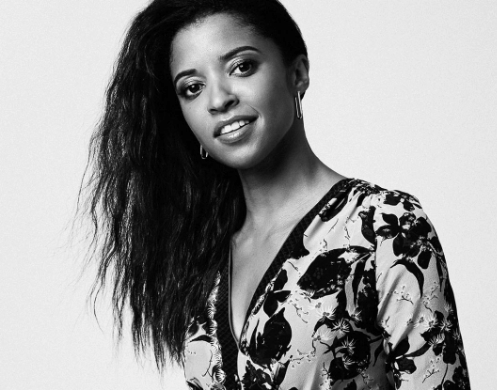 Well, that was until this past week when screeners were made available to press to screen the feature film version of the Broadway musical Hamilton on Disney+. And now I can say, I totally get what the fuss is all about. I’ve listened to the soundtrack for quite some time and know most of the lyrics to all of the musical numbers, but obviously, that is not the same as watching the show in its entirety. Now, fans like myself will get an opportunity to see Hamilton for the first time, and of course loyal fans will get to celebrate watching the film in the comfort of their own homes.

Tony-winning actor Renée Elise Goldsberry spoke to BGN in a phone interview (she spoke with us previously on Zoom) and gave us a double dose of what it’s like performing Hamilton in front of an audience and film cameras. She also gave us further information about her partnership with EduHam, as she works to bring more Black historical figures into the Hamilton universe. Seeing Hamilton now, she thinks, gives everyone a seat at the table — it’s no longer just for an exclusive few. Renée’s parting words of advice for readers who may want to travel down the same path or a similar one as the successful star of stage and screen is a simple one: “You could win a Tony for singing a song that lives on your [vocal] break.” 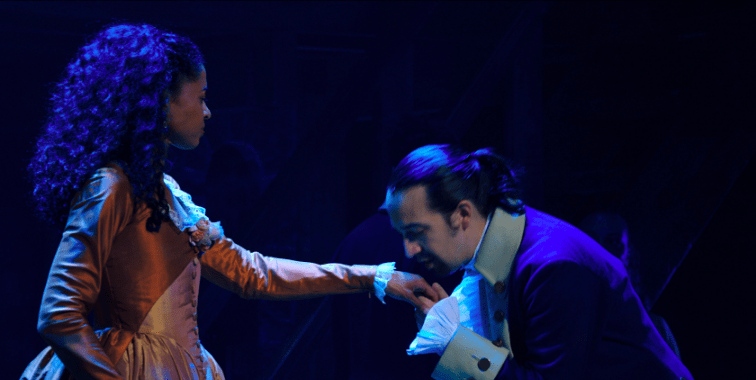 Thanks for coming back to BGN to chat with us about your appearance in the film version of Hamilton. Are you excited to see the reactions of people who’ve never seen the show finally getting a chance to watch?

Oh my God. With bated breath. I’m waiting to see what new communities of people who have not seen it feel about it. That’s the true test to the success of the film honestly. There will be many of us that watch, celebrate, and remember. And there will also be new people who join our party and join the family of people who really love this piece of work and the universal truth that celebrates.

Yeah, it’s a good feeling not to be left out anymore. When people make Hamilton references, I can finally get it.

I remember in that first year or so of Hamilton, a mother in my son’s school wrote me an email and she just said that her daughter was really upset. She went to a private school, and I think there were a lot of wealthy kids there. They had all seen Hamilton, and they would talk about it all the time and their teachers would talk about it. Her daughter would sit in the classroom and feel very uncomfortable. She asked me if there is any way I could get her a ticket to the show, because she felt very excluded. That was the thing we were always fighting against! I don’t think that people understood when they said, “Oh, I’ve seen it four times,” that it made other people feel like something was wrong. So the beauty of it is that saying that you saw it will no longer be bragging. It will just be, I am also a part of the Disney+ family and I have a seat.

Were the logistics of filming the Broadway show for the purposes of a feature film any different for you than performing this traditionally without film cameras?

Absolutely. We did show up to do our show that we do all the time, and we were used to being in high pressure situations. By the end of that year on Broadway, believe me, we had had many, many surprise visitors in that audience who could have thrown us. But cameras are different because it’s for posterity. They’re in places that you normally look, and you don’t see the camera. The enemy is always being self-conscious. When you’re staring at a camera (and I shoot a lot of film and television), you rarely talk into the camera. You just know that the camera is there over somebody’s shoulder. We were also very well aware of how protected we all are in that musical. We’ve made many mistakes before, and people still thought it was brilliant at the end. That’s how much bigger the thing is really than any one person’s performance. You can see when you watch this film how many of the numbers that we are famous for, like mine, “Satisfied,” there’s a lot of people doing brilliant things that are not me and are in that number. That’s the awesome thing. If you only heard the cast recording, and now you get to see it, you know how many people are always lifting you up in that show. So it makes it easier.

The last time you were here you gave us the scoop about your partnership with EduHam and bringing more voices of color as Black historical figures to its programming. Can you share more with us about your involvement?

When they decided to release Hamilton early, it was in response to the theaters going dark and the need to bring people together. Then we found ourselves again in a Black Lives Matter moment. It was not new. We’d been in the Black Lives Matter moment throughout Hamilton; it was 2014 when Eric Garner was killed.  But when everything closed down and shut down, we put Hamilton out into this moment in this world. What was clear was the opportunity to use it for something bigger. We had a responsibility with our individual platforms, this thing, this Hamilton, this company — we recognized the responsibility to celebrate and to support the activism that was happening and the need for change. So we were brainstorming, what can we do? What can we do for Black Lives Matter? One of the ideas we had was to use the education arm, and  EduHam was this brilliant idea. Jeffrey Seller, the producer of Hamilton, had partnered with Gilder Lehrman, this wonderful organization that archives all of this work of our founding fathers. They’ve done a really good job of first having it in the theater and connecting it to children in schools, and then putting it online so that families have access to it. What we wanted to do was to make sure that you had access not just to the white voices of the revolution, but the Black voices of the revolution. There wasn’t time to focus on slavery in the way that we needed to. There are several lines in Hamilton that talk about the failure of the Founding fathers to address slavery and how they kept kicking it down the road that is not ignored. But what we don’t hear are the actual voices of those brilliant people at that time. What we want to do with EduHam is to use cast members to do online reading and study Phillis Wheatley reading the work of some of these people and introducing them to anybody who is interested Gilder Lehrman — anybody who loves Hamilton. We want you to also know about their voices. 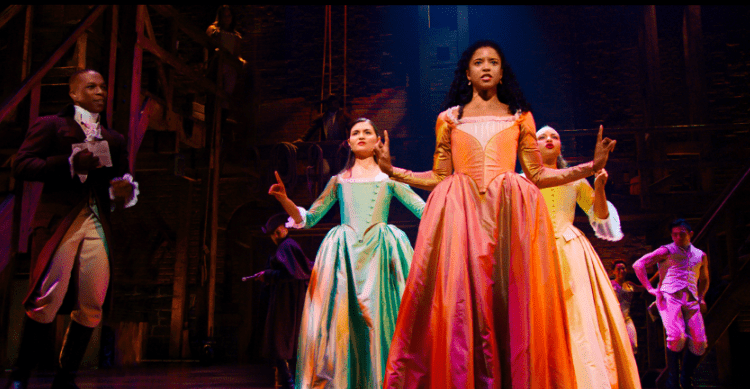 What advice do you have for young women of color interested in theater or even the entertainment industry who admire the path you carved and wish to follow in your footsteps?

Just keep showing up. That’s the advice I have for young African American girls in the theater. My biggest thing is to not say no to yourself. Do not say, “I can’t play this part because I am not this age or this color or this size or I can’t sing that note.” You can’t say no to yourself, because you never know — you could win a Tony for singing a song that lives on your break. You have to operate believing that if an opportunity presents itself to you, you prepare, you show up, and then you see what happens.