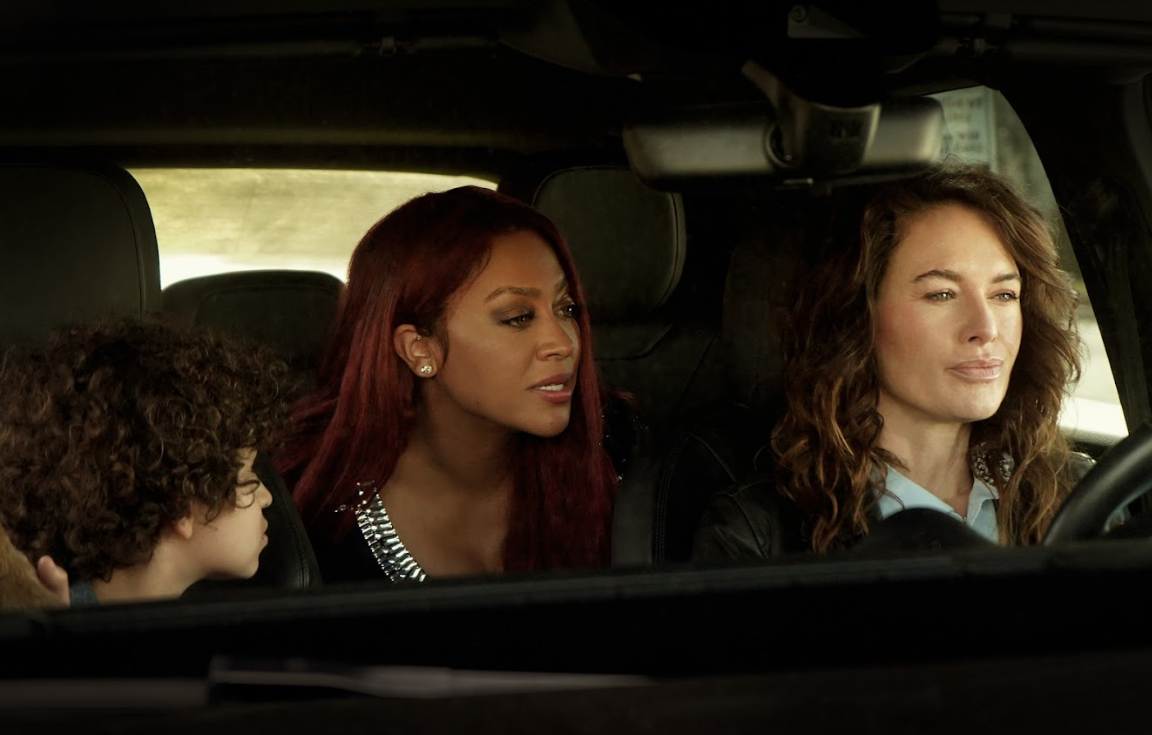 As the production credits begin the film, we see a logo for “Chicken Soup for the Soul Entertainment.” Their motto is: Changing the world one story at a time. It’s a good indicator of what level of production to expect, and you’re never really proven wrong.

9 Bullets is a road trip movie where a cabaret dancer named Gypsy (Lena Headey sporting a baffling and oft-disappearing accent) and precocious Sam (Dean Scott Vazquez) team up to escape the reach of Jack (Sam Worthington). Sam gets a distressing call from his father one night, ordering him to grab an important iPad and meet at their spot.

Unfortunately, time is not on their side, and Sam watches as his family is killed in front of him. He runs into Gypsy, who drops everything to take him to the safety of his Uncle. Along the way, we learn of her own entanglement with the infamous crime lord simply known as Jack.

From the start, the danger is very real. Sam’s father has stolen a large sum of money that was supposed to go to Jack and hopes to use it to support his growing family. Young Sam is the only person who holds the key to how to retrieve the money, so the bad guys are after him, and by extension Gypsy, with reckless abandon.

9 Bullets is a movie made up of a lot of misshaped pieces. I wouldn’t say that together, the pieces make a beautiful picture, but it’s not entirely uninteresting to look at. There’s a lot going on outside of Gypsy and Sam roaming across the country, and that lot is interesting, but hard to hold on to. The film is sparse on characters but uses the ones they have well.

Headey plays Gypsy as a double agent who is out for herself. She was next-door neighbors with Sam, and had an affinity for the boy, but also has an on-again/off-again “situationship” with Jack. She understands his danger and keeps him around in a “keep your enemies close” capacity.

Sam Worthington does a serviceable job, but he doesn’t add much to the character. I don’t know if we were ever really told what his business was or where he got the money that was supposedly stolen from him. For someone to be the most menacing presence in the film, he doesn’t have much of an impact which speaks to the main issue with the film. It’s hard to pinpoint the focal point.

Gypsy is the lead character, but her story feels inconsequential. There’s something lackluster overall. It’s becoming a signature for Headey. While in Game of Thrones, her stoic duplicitousness thrived in quiet moments, in projects like Gunpowder Milkshake that thrive on chaos, a little more personality is needed. That’s not to say Headey doesn’t have charisma, but it feels like she’s holding back.

The title of the film, 9 Bullets, is based on the premise that it takes 9 bullets to kill Gypsy. It’s a way to simplify Gypsy’s tenacity for Sam but it falls flat since we never find out what this statement is actually based on.

Gypsy has a sordid and tragic past that makes her initially reluctant to help Sam, but there are key parts missing when it comes to establishing her relationship with Jack and just how she’s so intimately involved in his operations while also living next door to people who worked for him.

All of this may sound trite, but these small things never allow the film to be elevated past Paramount channel status. It’s not a total wash. There are some bright spots. An inexplicable but needed cameo by La La Anthony added a bit of brightness to an otherwise dull script. The short-lived inclusion of legendary Barbara Hershey was welcome if not overly convenient to the plot, both help to make up for the cryptocurrency side plot inserted at the 11th hour.

While, unfortunately, 9 Bullets was sort of a dud for me, I will say I admire the director and writer Gigi Gaston. In an article with Picture This Post, Gaston spoke about how the idea was formed from her experiences with the famed burlesque dancer Gypsy Rose Lee.

The dancer was made famous in the 1962 film Gypsy starring Natalie Wood and Rosalind Russell. The movie was adapted from Lee’s autobiography, and the influence is evident in 9 Bullets. Gaston says of Lee, “Gypsy said to me, ‘See all those men out there? Well, they only see this,’ as she swept across the length of her body, and she then said, ‘What is more important is what is between your ears. Brains are way more important than anything else, remember that.’ And I did”.

When we open the film, we learn Gypsy has gotten a book deal and is trying to start a new chapter of her life as a writer. She carries a laptop and makes edits at every stop. It’s a bit heavy-handed, but the sentiment is there. There are also bits from Gaston’s personal life such as Gypsy’s relationship with Sam and his dog.

On its own, I can’t say the movie was successful, but if you view it through the lens of being a work of historical fiction about Gigi Gaston, it can certainly be enjoyable.