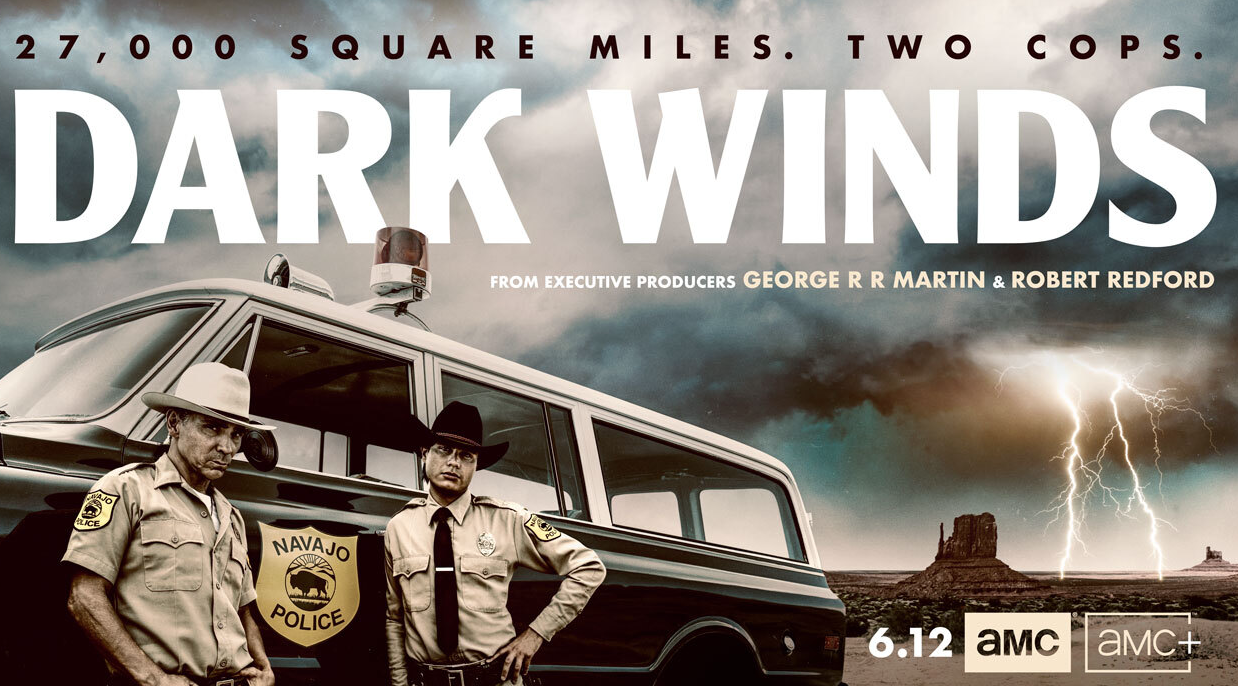 I love crime noir series like Netflix’s Deadwind that use the entire season to solve one crime. When I heard that Game of Thrones writer George R. R. Martin was co-executive producer of the new AMC+ series Dark Winds, set in 1971 in the Navajo Nation. I was thrilled.

Although the setting and inspiration for Dark Winds are compelling, the pacing is mind-numbingly slow, the storylines are predictable, and most of the actors seem like they are going through the motions.

Dark Winds is an adaptation based on The Dark Winds book series by Tom Hillerman, and it felt dated. If I could turn back time, I could see myself watching this series back in the ’90s when Phillipino/Hawaiian American actor Lou Diamond Phillips was playing Native American roles. In fact, Phillips starred as Officer Jim Chee in a film called The Dark Wind, based on a Tom Hillerman novel where drug dealers are discovered on the reservation. Let’s fast forward to 2022 and talk about the series Dark Winds.

We first meet no-nonsense Lieutenant Joe Leaphorn (Zhan McClarnon, Westworld) when he puts an Indian artifact stealing white man in his place. The series is off to a great start. It’s 1971, and Lieutenant Leaphorn heads up the Navajo tribal police near Monument Valley, Arizona. When the bodies of a local girl and a local old man are discovered in a hotel, it looks like a double homicide. Since Joe is Tribal Police, he can’t investigate — he must call the FBI.

The only witness to the murder is the girl’s blind grandmother, who is traumatized and temporarily unable to speak. Coincidentally, the FBI is in town to investigate a bank robbery nearby, just as a new Deputy, Jim Chee (Kiowa Gordon, Roswell), arrives. Episodes one and two have potential. The first action sequence draws the audience in. Dark Winds also gives us an inside look into the culture of the Navajo people beyond the general stereotypes we are accustomed to First Nation actors playing.

Don’t get me wrong, problematic stereotypes exist in the series but they are balanced out with content that recognizes the forced sterilization of Indian women, systemic racism that first nation people face from white-dominated social systems and law enforcement, and the internal cultural struggles within First Nation communities. I thought the series would go deeper to explore the brutal phenomenon of unsolved murders of Indigenous women — but it just goes surface level with that subject and sticks to making broad cultural statements throughout the series with no real resolution or commentary.

Dark Winds embraces Indigenous mysticism in interesting ways through two of the female characters. However, all of their interactions seem indicated. The actor’s choices are broad and melodramatic. I was excited to see Zhan McClarnon as the lead actor in this series. He’s had so many roles where he plays the stoic, silent, or violent indigenous man whose only purpose is to support the main storyline.

What Dark Winds does well is give a representation of the Navajo culture that isn’t often seen on television. The Navajo characters are centered in this series, and the audience is allowed to experience specific coming of age rituals in ways that are not performative. The best parts of the series are when we are allowed to experience the indigenous characters dealing with conflicts we all deal with.

A young person’s desire to leave a small town and seek a better life in large cities has a deeper meaning when the small town is a reservation. What happens when centuries of colonization end up compelling indigenous young people to want to assimilate rather than keep their culture alive?

The writers of Dark Winds touch on this subject but never go beyond the surface level. Yes, we have a diverse spectrum of indigenous people represented mindfully. Yet, in eight episodes, I felt like I still only got a general sense of all the people I met on the screen. Do I care what happens to them? A little bit. When an episode finished, I wasn’t left feeling like I couldn’t wait to see the next episode.

Co-writers Chris Eyre (Smoke Signals) and Maya Rose Dittloff are both Native American writers who give Tony Hillerman’s source material a new level of authenticity. The series is most interesting when it deals with the systemic challenges the characters face. Father Benjamin (Jeremiah Bitsui, Breaking Bad) starts off as a character with nuance but ends up feeling formulaic.

Officer Bernadette Manuelito (Jessica Matten, Frontier) has a powerful energy. Her dedication to her job and community adds a welcoming nuance to her character. Her ability to integrate her indigenous spiritual practices with her police work was a creative approach to creating this character. Like many of the characters in Dark Winds, this character starts off with unique potential but ends up falling into being the same stock characters we see in police shows. Dark Winds is a solid television show.

The show has some humor, the cinematography is gorgeous and some very interesting moments showcase Navajo culture. The show is predictable and easy to have on while washing the dishes, cooking dinner, or folding laundry. Dark Winds is a basic comfortable summer crime mystery you can watch with your grandparents that could easily be on network television.

Clarke Peters from ‘La Fortuna’ on the Beauty of Acting

Indigenous Sci-Fi and Fantasy Authors You Should Be Checking For