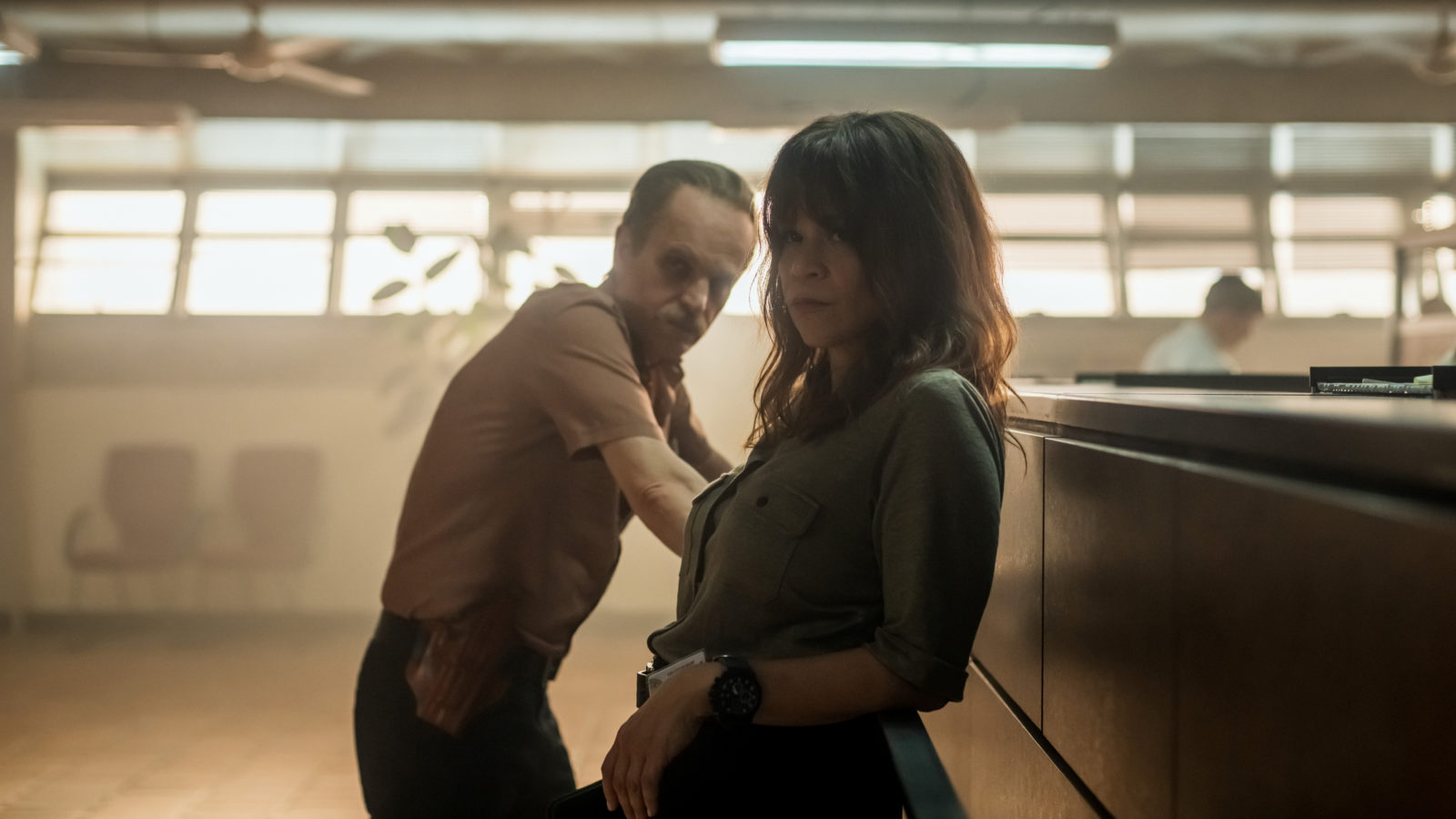 Apple’s latest original Now & Then is an intriguing whodunit with multi-layered characters facing life-changing consequences. The bilingual series comes from showrunners Ramón Campos and Gema R. Neira, the duo behind the series High Seas and Cable Girls, and follows the lives of former friends and current disillusioned adults as they grapple when a past secret catches up with the present.

One fateful night in Miami, six best friends party on the beach to celebrate their status as recent college grads. But not all of them survived the night’s festivities. Alejandro (Jorge López) dies a mysterious, gruesome death, and we see all of his friends with literal blood on their hands.

Twenty years later, the remaining five receive anonymous messages demanding one million dollars each of them to keep their secret, forcing the old friends to reconnect and figure out who could possibly know about that night. It’s not long before the surviving five are down to four.

Miami homicide detective Flora Neruda (Rosie Perez) worked the first case involving this group of college grads back in 2000. It still eats at her that it went unsolved. With the most recent body to turn up in connection to the same people, Flora, who is now Sergeant Neruda, has a second chance to get justice. Like any obsessive on-screen detective, Flora has a partner, Detective Sullivan (Željko Ivanek), who’s concerned about her well-being.

Perez played a much different kind of detective in Birds of Prey. However, Renee Montoya and Flora Neruda are both undermined by male colleagues, though Flora is comparatively less so. The star-studded ensemble cast, both 2000-era youngsters and their matured counterparts, do a brilliant job conveying the evolving emotions of their characters in scenes by themselves and when the groups are together.

The reunion is tense given the circumstances of, you know, being blackmailed. But the characters’ current social status and wealth (or lack thereof) create even more friction. Ana (Marina de Tavira) and Pedro (José María Yazpik) have a most comfortable life. However, Pedro’s mayoral run comes with its own troubles. Marcos (Manolo Cardona), who once planned to join Doctors Without Borders, works as a plastic surgeon at his father’s practice. His old college girlfriend Sofia (Maribel Verdú) isn’t exactly who she wanted to be, and single mom Daniela (Soledad Villamil) is in a similar boat.

The story unfolds over eight episodes. Most of the runtime is spent with the adult versions of the group as they have flashbacks to their younger selves. This is where I want to really praise the series because they get creative when intercutting past and present.

They use interesting ways to transition between periods — like the slap to a character’s face sends us into a past moment that mirrors the current one. However, it avoids anything too fantastical. (If you’ve seen Cold Case, you’ll know what I mean.) Many people don’t like the back and forth. Truthfully, some shows and films do flashbacks in a way that’s confusing, distracting, or just unnecessary. Now & Then is not one of those shows.

Past-tense frameworks are used to learn more about a character and what or who made the person they are today. In this case, flashbacks are crucial not only for character development but to reveal the truth behind everyone’s countless lies. It also shows how group dynamics have and have not changed over two decades; some are natural leaders while others cling to the decision(s) of someone else.

What’s cool about this series is that past and present characters can be in the same scene, putting us in the POV of whoever is looking at them as they reminisce about being young. Sometimes it doesn’t even feel like a flashback, because the transitions are so seamless.

Now & Then certainly has its soap opera moments — affairs, corruption, unrequited love — but the show crafts such nuanced characters that it still feels fresh. It helps that the show isn’t filmed in that hot and sunny saturated look that places like Miami are often presented. Instead, we get the signature Apple cinematic quality that is sharp and appealing.

The lighting is sometimes used to distinguish between past and present with the past being a golden almost sepia tone in the present often and blue lighting or red lighting when things heat up. Experimental camera angles alter the atmosphere in certain scenes. For example, one particularly passionate sex scene is soaked in red lighting with a rotating camera, which gives the same dizzying effect of the frantic intimacy between the two characters.

While the “blackmail via anonymous text” has become a common trope in series like Yellowjackets and Pretty Little Liars, Apple’s Now & Then creates its own mystery that is anything but straightforward. The powerful ensemble cast and stunning visuals establish this thriller as, not just a must-watch, but a must-binge.

Now & Then debuts its first three episodes on May 20, 2022, on Apple TV+, with new episodes streaming weekly through June 24.