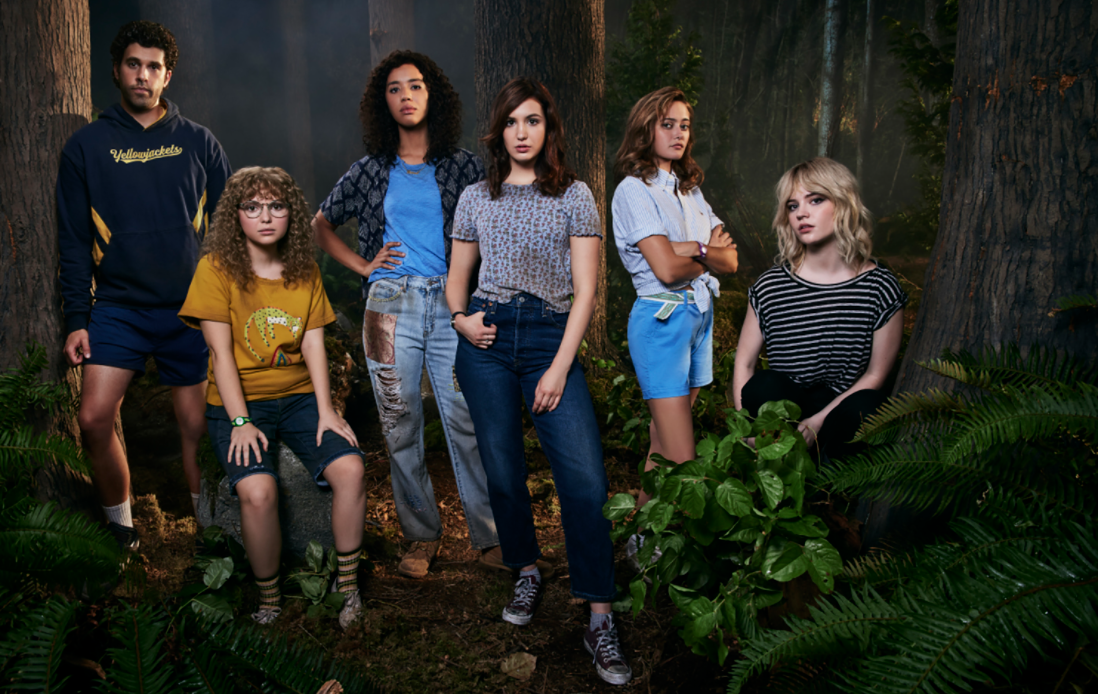 Yellowjackets might be one of the smaller winged creatures in the animal kingdom, but they are one of its most vicious. Highly venomous and fanged, a yellowjacket will use its teeth to hold onto its victim while stinging it as many times as it feels like, often unprovoked. The metaphor of a yellowjacket is perfect in describing a group of teenage girls, whose volatile behavior often mimics the ferocity of a surprise yellowjacket attack.

In Ashley Lyle and Bart Nickerson’s original series Yellowjackets, we meet the titular champion girls soccer team from Miskayok, New Jersey, who have just placed in the spring 1996 national championships. Buzz buzz buzz! The diverse team does all the normal things that teenage girls do. You know, like slumber party seances, clandestine make-out sessions, journaling, crushing on a teacher, impromptu dance parties, singing pop songs off-key, shearing signature locks, pining over unrequited love, introducing a friend to their church, tripping out on magic mushrooms, getting drunk, messing around with their teammate’s boyfriend, and having sex for the first time. But for these illustrious Yellowjackets, all of this and more happens in the middle-of-nowhere Canadian Rockies, after their plane to Seattle crashes out in the wilderness. It’s one thing to metaphorically fight for your life on a soccer pitch. It’s an entirely different monster to take those survival skills into the wild; physical strength and resourcefulness are only one part of how a handful of the 18 Yellowjackets survivors made it through 19 months in the harsh wild.

From the first moments of the pilot episode, we watch a young girl hunted, brutally trapped, and bled out ritualistically in what may or may not be a ceremony for fine young cannibals. Like real-life yellowjackets, the show is savage. Yellowjackets is hybrid storytelling at its most powerful — part coming-of-age fable, part survival horror intersected with the particular discord that only groups of women friends are capable of — flitting between 1996 and 2021, where the few team members who made it out of the mountains seem to be getting blackmailed and another has potentially been murdered. The women have maintained a pact of silence for 25 years, a trauma bond that includes moments of extreme betrayal and desperation you will have to see to believe. Creators Lyle and Nickerson have a five-season arc planned, and Yellowjackets has already been renewed for its second chapter.

Each episode is meticulously crafted in both writing and powerhouse performances from both the younger and older versions of the surviving characters. In particular, Juliette Lewis as the elder punk rock badass Natalie thrums with the pent up energy of unspoken trauma and unresolved grief, and we see the roots of this pain in Sophie Thatcher’s younger Nat. Give them both Emmys already. The only other show with casting that is as on point as Yellowjackets is This Is Us, but that’s where the comparison ends.

So far, Yellowjackets has been compared to Lord of the Flies and 1993’s Alive with a mostly women cast. But these are just the obvious, surface comparisons. Going deeper, Yellowjackets has the power of Neil Marshall’s claustrophobic survival horror The Descent — which also features a capable cast of athletic girls and their messy relationships — married with the complicated realness of Michaela Coel’s I May Destroy You, and the visual artistry of Bryan Fuller’s Hannibal. Yellowjackets even manages to pay homage to some ’90s classic horror movies, like The Blair Witch Project and Bram Stoker’s Dracula in its storytelling, which adds new layers of nuance to the production.

Once you get past the abject horror of each episode and its corresponding plot revelations, there is an absolutely genius undercurrent of dark humor that threads its way through the show making it well worth multiple rewatches. Like I May Destroy You, this narrative shifts every time you watch it once you have more information. Yes, it’s beyond disturbing, but it’s also a work of art.

Even with so much creativity going on throughout, at its heart Yellowjackets is a hyperreal character study never forgetting that this is a story about complicated, traumatized women and their labyrinthine friendships, enmities, and the frenemy living in the middle of that spectrum. The jealousies, power plays, betrayals, and secrets are a familiar part of my own history, made it all the more real seeing as I was also a junior in high school in spring of 1996, who also traveled internationally for theater and music conventions. I even had the same red velvet dress with bell-bottomed sleeves Shauna (Sophie Nélisse) wears to their farewell party. This means I am the exact same age now as the survivors in 2021, and I feel the weight of all they have overcome. I’ve had my own times out in the wilderness and many near brushes with death too. From the first Yellowjackets episode, I had to keep reminding myself that it’s not a documentary. Even though I have known every single character in real life and see myself reflected too, what’s in front of me now is a work of fiction. My night dreams haven’t known the difference though, and I’ve had some doozies since Yellowjackets first aired.

This is a show for women, about women, and very obviously made by women. Only women behind the camera would allow the girls’ armpit hair to grow out as it would if they were cut off from society. Same with the open handling of menstruation once all the girls’ periods sync up. It’s eye-opening how these natural bodily functions seen on screen become transgressive acts in the context of our unfortunate patriarchy, which continues to shape visual media in misogynistic ways.

As we experience the trauma of the airplane crash along with the girls (and the few male survivors), we also see how the fresh trauma intersects with the terrible things many of the girls have already been through at their young ages. We watch in sometimes painstaking detail how the layers of personal trauma turn into horrifying generational trauma in the extended families (and even friends) of the Yellowjackets who made it out of the wilderness. For women of my exact age who had already experienced severe trauma by their mid-’90s high-school years, be careful when consuming Yellowjackets. This narrative psychologically stings and bites; the punctures might get infected if you’re not mindful.

One of the more painful things to witness is how committed each survivor is to keeping their collective secrets from their ordeal, and how these secrets create a wall between themselves and everyone they love, preventing them not just from living healthy lives but also blocking them from personal healing altogether. They all need serious trauma therapy, but therapy only works with honesty and openness. By 2021, it’s clear the old resentments continue, yet the survivors remain toxically bound, to everyone’s detriment. Over and over, we see how people don’t actually change; they just become more and more who they always were. How this expansion takes place is marvelous, and harrowing, to watch, like the plane crash in slow motion.

Yellowjackets is almost perfect except for one thing: its lack of Asian representation on the soccer team. The only Asian representation is marginally in the present-day scenes. Otherwise, Yellowjackets has a diverse cast of Black, Latinx, white, and multiracial individuals including solid queer representation. However, a close viewing (and studying the cast list) reveals two crash survivors in 1996, one Asian and one Black, only credited as Yellowjacket #1 (Mya Lowe) and Yellowjacket #2 (Princess Davis). Will we get a formal introduction to these two in the second season or are they just filler actors? Fingers crossed we meet them because it’s a huge oversight to not have any Asian chicks on the soccer team. This is the only gap I spotted in this otherwise detailed tapestry.

Ultimately, Yellowjackets goes on to demonstrate that the merciless yellowjacket actions in nature are also an accurate description of grown women’s behaviors, stabbing venom while gnawing on the people they claim to love the most. For the future of Yellowjackets the big question becomes: What will redemption look like for the surviving team members when their reckoning of truth inevitably arrives? Secrets can only be contained for so long. After 25 years of holding rank coupled with the unhinged events of the first season finale, the Yellowjackets’ grace period might finally have expired. Season 2 can’t crash land soon enough.